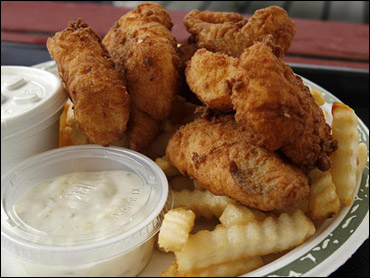 Eating fried fish is more common in "stroke belt" states than other states, which may contribute to the higher rate of fatal strokes in those states, a new study indicates.

The omega-3 fatty acids in fish, especially fatty fish, have been associated with a reduction in the risk of stroke, studies have shown. However, research indicates that the process of frying fish causes a loss of these beneficial fatty acids.

The study, published in Neurology, shows that along with a higher consumption of fried fish, people living in the stroke belt are less likely to have an adequate intake of non-fried fish, defined in the study as two or more servings of non-fried fish per week based on guidelines from the American Heart Association.

It also found that African-Americans are more likely to eat two or more servings of fried fish per week than whites. A serving is considered 3 ounces of fish.

"These differences in fish consumption may be one of the potential reasons for the racial and geographic differences in stroke incidence and mortality," says Fadi Nahab, MD, of Emory University in Atlanta and lead author of the study.

Researchers examined data on 21,675 people participating in a study program called REGARDS, for Reasons for Geographic and Racial Differences in Stroke.

Study participants were interviewed by telephone and then given an in-home physical examination. They also filled out a questionnaire asking how often they ate oysters, shellfish, tuna, fried fish, and non-fried fish.

Among the key findings:

• Fewer than one in four of the people (23 percent) ate two or more servings of non-fried fish per week.

• People living in the stroke buckle were 11 percent less likely to eat two or more servings of non-fried fish than participants in the rest of the country.

• People in the rest of the stroke belt were 17 percent less likely to eat recommended servings of non-fried fish on a weekly basis.

• People in the stroke belt were 30 percent more likely to eat two or more servings of fried fish than people in the rest of the country.

The researchers conclude that racial and geographic differences in fish consumption may be one of the reasons for differences in stroke incidence and death in various areas around the country.
By Bill Hendrick
Laura J. Martin, MD