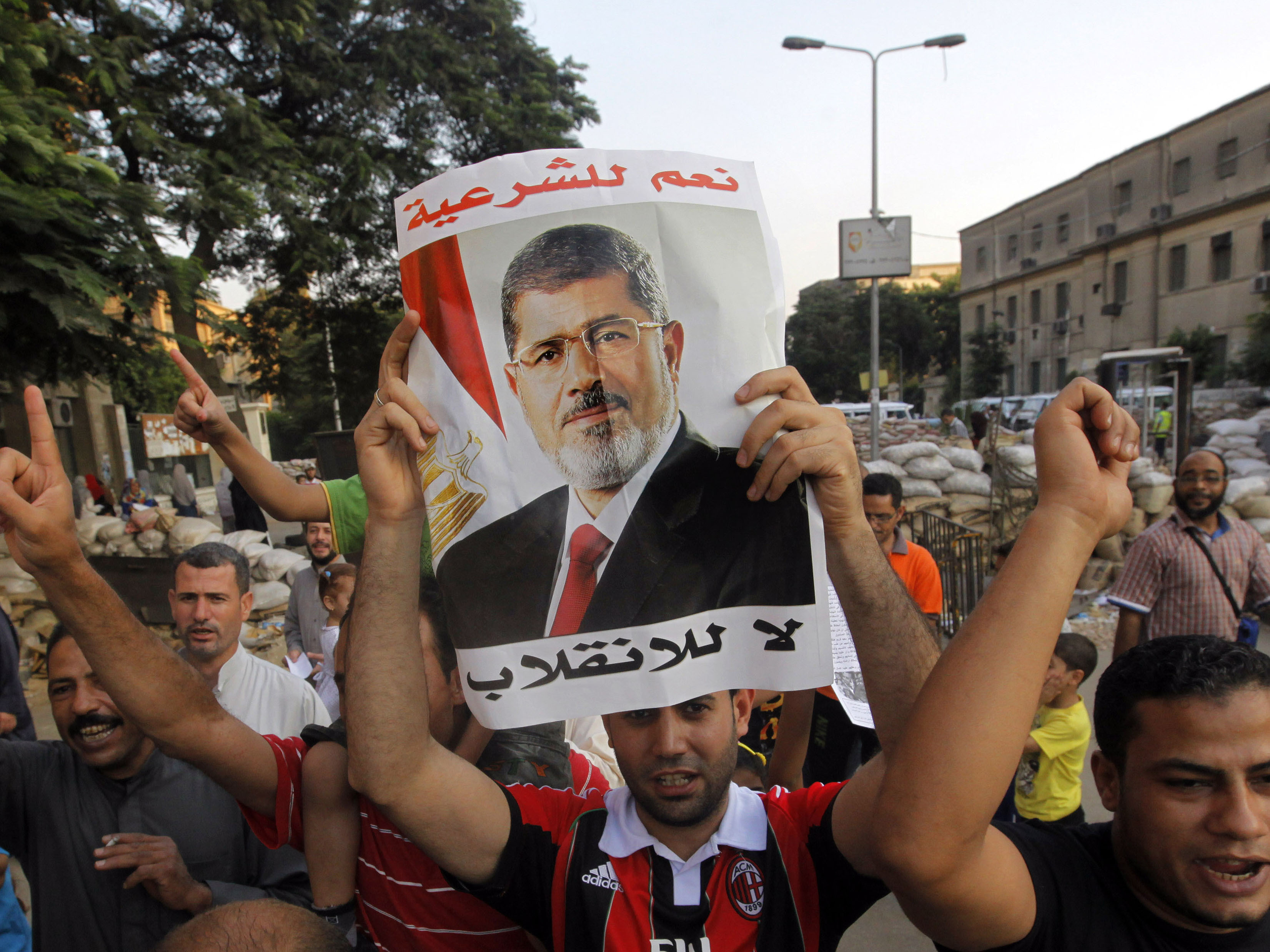 At the main sit-in, vendors said they have sold hundreds of gas masks, goggles and gloves to protesters readying for police tear gas. Three waist-high barriers of concrete and wood have been built against armored vehicles.

CBS News correspondent Clarissa Ward reports that security officials plan on setting up cordons around the sites so people to leave the protests, but will prohibit anyone else from entering the area.

The Arab world's most populous country, where more than 250 people have been killed in clashes since Morsi was toppled July 3, braced for more violence as the four-day Muslim Eid celebrations wrapped up Sunday to end the holy month of Ramadan.

The Interior Ministry has said it would take gradual measures, issuing warnings in recent weeks and saying it would use water cannons and tear gas to minimize casualties.

Interior Ministry officials, speaking to The Associated Press on condition of anonymity because they are not authorized to discuss details of the security plans, said they are prepared for clashes that might be set off by the cordons. The officials said police are working with the Health Ministry to ensure ambulances are on hand for the wounded and that armored police vans are nearby to take away those arrested.

A special force within the Interior Ministry's riot police that are trained for crowd dispersal will deal with protesters. In the past, however, Egypt's riot police, many of whom lack the training to deal with unarmed civilians, resorted to using lethal force.

There was no immediate government confirmation of when forces would move in on the sit-ins.

Egypt's military-backed interim leadership alleges that the sit-ins and protests have frightened residents, sparked deadly violence and disrupted traffic in the capital. Mass rallies two weeks ago called by the military leader, Gen. Abdel-Fattah el-Sissi, showed that a large segment of Egypt's population backs the armed forces' actions against the Morsi supporters.

The protesters blame the Interior Ministry and "thugs" for past violence, including a July 8 clash between demonstrators and security forces that left more than 80 dead.

Just before the holiday, the government said international efforts failed to reach a diplomatic solution to the standoff with Morsi's supporters, who include members of his Muslim Brotherhood. The Cabinet said the decision to clear the main sit-in site outside the Rabaah al-Adawiya Mosque and a smaller one in nearby Giza near Cairo University was "irreversible."

A last-ditch effort was launched over the weekend by the Sunni Muslim world's pre-eminent religious institution, Al-Azhar, to push for a resolution.

The protesters, who demand Morsi's reinstatement as Egypt's first freely elected president, are expecting an imminent security push to clear them out and they have been fortifying their positions.

Ripped-up pieces of pavement comprise the first barriers that visitors must zigzag around to reach the Rabaah sit-in, where tens of thousands have been camped.

Along the way are piles of rocks to throw at police. There are also signs denouncing el-Sissi, who led the coup against Morsi, as well as marks on the ground that purport to show where protesters were shot to death in the recent clashes with security forces. One man bent down to kiss one of the spots on his way to the sit-in.

At the six entrances to the camp, male and female volunteers frisk visitors, inspect bags and check IDs.

Speakers on a stage Sunday led chants of "The dogs of el-Sissi killed my children!" and sang the national anthem.

There are fears that violence from trying to clear the two sites will spread to other areas of the capital and beyond, where thousands of Morsi supporters also hold near-daily marches.

The main protest camp is between middle-class residential buildings and ground floor businesses. Its focal point is the mosque and an adjacent stage where leaders of the Brotherhood charged with inciting violence openly talk to journalists.

Among them is former lawmaker Mohammed el-Beltagy, who vowed over the weekend to continue protesting at the sit-ins.

"We will happily sacrifice our souls, not for ourselves but to free the captured nation and to ensure freedom and dignity to our people and to the coming generations," he said.

Security officials, speaking anonymously because they are not authorized to release the information, suspect that Brotherhood guards around the mosque in Rabaah al-Adawiya Square are well-armed. They also say both camps have armed protesters on rooftops ready to shoot.

The Interior Ministry has depicted the encampments as a public danger, saying 11 bodies bearing signs of torture were found near both sites. Amnesty International has also reported that anti-Morsi protesters have been captured, beaten, subjected to electric shocks or stabbed. At least eight bodies have arrived at a morgue in Cairo bearing signs of torture, the human rights group said.

Of the more than 250 people killed since Morsi was toppled, at least 130 of them were his supporters who died in two clashes with security forces last month.

Anxiety bristled among protesters in the Rabaah encampment, where young men lined up on opposite sides of a narrow walkway greeting visitors with horns and drums.

"Don't be upset by the security check! It's for you! This square is your square!" they sang as parents walked through with their children, some wearing Morsi face masks or paper crowns adorned with his image.

Thousands have been sleeping in tents and under photos of Morsi with his hands stretched out. Children played among gruesome images of dead protesters.

The overwhelming majority of the demonstrators echo the demands of the Muslim Brotherhood: Restore him to power and reverse all the actions taken by the military, including suspension of the disputed constitution and disbanding of the legislature.

Many of those interviewed dismissed the mass protests against Morsi in the final weekend of June that preceded the coup. They acknowledge that Egypt is sharply divided, but worry that if they do not defend the sit-ins, they will be detained and tortured — just as many were before the 2011 uprising that toppled autocrat Hosni Mubarak.

They say they waited for hours to vote for Morsi in the elections that catapulted the Muslim Brotherhood to power after years of oppression. They say the military leaders have stolen their children's future by overturning the outcomes of the balloting. They say that anyone who dies to restore justice or secure a better life for their children surely has a spot in paradise.

Um Roqiya said she will remain camped out with her five children, despite concerns for their safety.

"We are here to defend legitimacy. If I die defending that, we are martyrs," she said while patting her 7-year-old son on the head. "My son tells me, `I won't return until uncle Morsi comes back."'

Her husband, longtime Brotherhood member Abdel-Latif Omran, said he can do nothing to protect his children from death because their fate has already been decided by God.

Organizations like UNICEF have condemned what it calls the deliberate use of children in Egypt who are "put at risk as potential witnesses to or victims of violence." The Brotherhood says it cannot control families that choose to camp out.

Taking advantage of the Eid celebrations, organizers of the sit-in transformed it into a carnival-like atmosphere for families, setting up play areas for children under banners that read "Kids against the coup."

Neither authorities nor the guards have made clear how women and children will be able to safely leave if rocks start flying and tear gas is fired. In past clashes, birdshot and live bullets were allegedly used by both sides.

Security analyst Daniel Nisman of the risk consulting firm Max Security Solutions, said there was no easy way out, with members of both sides likely to be armed.

"This is a lose-lose situation. It is either lose-big or lose-a-little-bit-less- big," he said.

Saber Mohammed Mansour, who is from Egypt's Sinai Peninsula, has spent 44 days as a guard at the main camp. Dressed in a traditional "galabiya," a long loose garment, Mansour said he is willing to die for the cause.

Mansour and his fellow civilian guards, who wear hardhats and stand behind the sandbags, say their only weapons are the sticks they wield.

Hassan Ali, a 60-year-old vendor who was selling gas masks at Rabaah al-Adawiya, said he is wanted by police for also selling slingshots to protesters.

For Morsi supporters, the sit-ins are one of the last ways to express themselves against the new government. TV channels sympathetic to Morsi were shut down after they appeared to incite violence. Morsi and top leaders of the Brotherhood have been detained and are facing criminal investigations.

Aware that the protest has little support in the Egyptian media, Mansour's fluent English is a beacon of pride for his fellow guards.

"I will sacrifice myself, my family and my children for my country," Mansour said. "We are martyrs. ... In the end, our faith is in God."

Hovering over him as he spoke were two large, faded posters erected by the military rulers who took over shortly after Mubarak's ouster. They depict a soldier cradling a baby, with the words: "The people and the army are one hand."