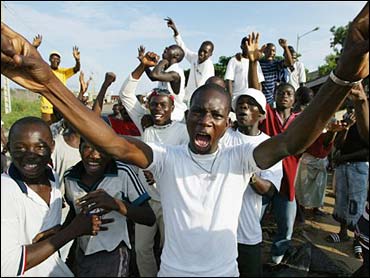 The French military force said it was investigating and refused to immediately comment.

Doctor Sie Podipte, the emergency room chief at Cocody Hospital, said the hospital was treating more than 200 wounded in the clash and had received seven people with fatal injuries.

The clash took place as thousands of loyalists massed outside the home of President Laurent Gbagbo, next to a hotel that the French have converted into a temporary evacuation center.

South African President Thabo Mbeki met with Gbagbo on Tuesday, launching an African effort to rein in chaos that has erupted in this west African nation.

Tuesday's clash would bring the number of dead to at least 27 people and the number of wounded to 800, and shut down cocoa exports from the world's largest producer at the height of the harvest season.

The U.N. Security Council, African Union, European Union and a bloc of West African leaders have all condemned President Laurent Gbagbo's government in the violence, which began when Ivory Coast warplanes killed nine French peacekeepers and an American aid worker in an airstrike on the rebel-held north.

Mbeki said Gbagbo had recommitted to tension-easing measures agreed to in past accords in the country's civil war. A year-old cease-fire ended last week when the government opened three days of bombing of the rebel-held north.

Mbeki declared himself "really very, very pleased" and said he would report back to the African Union for consultations on its next steps in the crisis.

Talks took place at Gbagbo's home with thousands of fervent supporters massed just outside, at a hotel a few hundred yards away that has been commandeered by the French military.

Some of the 1,300 French and other foreign civilians evacuated from their homes by the French military amid looting and burning stared out at the protesters from a protective ring of barbed wire around the hotel.

"We are not going to leave," one loyalist outside the French temporary base said, adding that protesters would take shifts to eat. "If I get the French, I can eat them," he said.

Protesters tried to pull down the barbed wire around the French evacuation point but scattered when two French snipers moved forward and drew beads on them.

After securing Abidjan's airport and bridges over the weekend, French forces on Tuesday appeared to have withdrawn from at least one main bridge in the lagoon-bordered city.

An Associated Press Television News cameraman saw a crowd surround one U.N. vehicle that ventured onto the bridge and kick it until the car withdrew.

Cocoa traders said the violence has shut down cocoa exports, closing ports that ship more than 40 percent of the world's raw material for chocolate.

Clashes that have pitted the government and supporters against French forces come at the peak of Ivory Coast's main harvest, with overall production last year at 1.4 million tons.

Violence has closed the country's two main ports, in Abidjan and San Pedro, since Saturday afternoon, traders and other officials told The Associated Press, speaking on condition of anonymity.

Cocoa buyers are not venturing out into the bush to buy cocoa, they said.

On Monday, top Ivory Coast and French generals jointly appealed for protesters to go home despite a day of urgent alarms on state radio and TV asking loyalists to mass at Gbagbo's home and a nearby broadcast center.

The TV and radio appeals came after French armored vehicles moved into position at the commandeered Hotel Ivoire, with one armored vehicle at one point making a wrong turn and approaching Gbagbo's house directly, the French acknowledged.

"Everything should go back to normal. ... It is absolutely not a matter of ousting President Laurent Gbagbo," French mission commander Gen. Henri Poncet said on state TV, alongside Ivory Coast army chief of staff Gen. Mathias Doue.

French leaders have said they hold Gbagbo — installed in an uprising by his supporters in 2000, after an aborted vote count in presidential elections — personally responsible in the airstrike Saturday and subsequent anti-foreigner rampages.

"They all told me that the Ivorian plane passed two times over the (French military base) building and fired on the third pass," she told reporters at St. Mande military hospital outside Paris.

At the United Nations, Security Council diplomats late Monday weighed a French-backed draft resolution for an arms embargo on Ivory Coast and a travel ban and asset freeze against those blocking peace, violating human rights, and preventing the disarmament of combatants.

France has 4,000 peacekeepers in Ivory Coast, where a civil war launched in September 2002 has split the nation between rebel north and loyalist south.

About 6,000 U.N. troops also are deployed to man a buffer zone and try to keep the peace in West Africa's former economic powerhouse, seen as vital to regional efforts to recover from 1990s civil wars.

The bombing of the French military post Saturday came on the third day of Ivory Coast airstrikes on rebel positions, breaking a more than year-old cease-fire.

The African Union dispatched Mbeki with a mandate to seek a political solution.