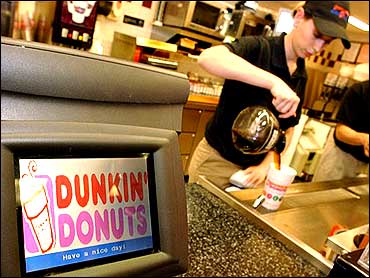 "The sale of Dunkin' Brands, within our expected timetable, is excellent news for Pernod Ricard as it allows us to accelerate the reduction of our debt," Pernod Chairman and CEO Patrick Ricard said in an e-mailed statement.

The Paris-based drinks maker made its plans to sell Dunkin' Brands clear after acquiring its former British parent, Allied Domecq PLC, in July.

"Their core business was spirits and wine, and we really had to fight for attention," said Luther. "When I wake up tomorrow, I know I have partners who will put us number one."

Pernod said the sale will be completed early next year, subject to regulatory approval.

"This has the potential to be a very profitable acquisition," said Allen Michel, a professor of finance at the Boston University School of Management who specializes in mergers and acquisitions.

Those profits, however, will be contingent on the company's ability to replicate Dunkin' Donuts success at home, Michel said.

"Here in New England, Dunkin' Donuts has a long history and they've been advertising and Dunkin' Donuts has made a tremendous investment in their franchise," he continued. "If you go to Cleveland, Ohio, Starbucks coffee is the drink of choice. They are really very, very entrenched."

Dunkin' Brands' three restaurant chains collectively generated $4.8 billion in revenue last year. Dunkin' Donuts is widely considered the crown jewel of the company. Its $3.4 billion in U.S. revenue last year was a 13 percent increase over the previous year — more than double the 5.4 percent growth for the U.S. food service industry.

Founded in 1950 with one store in Quincy, Mass., Dunkin' Donuts is now the largest U.S. doughnut franchise. It has more than 6,000 stories in 30 countries, which it says draw 2.7 million customers each day. Internationally, there are more than 5,000 Baskin-Robbins restaurants and about 400 Togo's.

While the greatest concentration of Dunkin' Donuts stores is in New England, the company is expanding westward with a goal of 15,000 stores to take on Starbucks. Dunkin' Donuts has introduced its own higher-priced coffee drinks as it tries to muscle in on Starbucks' dominance.

Luther said ventures into Florida and other states have shown that the company can be successful outside New England. The company offers customers value on-the-go, Luther said, while Starbucks focuses more on giving people a destination for coffee drinking.

The sale will help Dunkin' Donuts because all three private equity firms have experience with fast food, Luther said. Two of the three equity firms, Bain Capital and Thomas H. Lee, are based in Boston, near Dunkin' Brands headquarters in Canton, Mass.

Washington, D.C.-based Carlyle, with $35 billion under management, is the largest of the three successful joint bidders.

The three companies will invest equal amounts in the company and management, according to a joint press release. The consortium plans to leave the existing Dunkin' Brands management team in place, including Luther.

"We are delighted to partner with Jon Luther and his terrific team, as well as the entire Dunkin' Brands franchise community, to help achieve the organization's ambitious growth plans," said Bain Capital in a written statement.

Thomas H. Lee Partners added: "This is a company with well over 10 years of growth ahead of it, both in the U.S. and in international markets, and this sponsor team has made a long-term commitment to realize that potential."

Pernod officials said that the acquisition strengthened their position against a rival liquor company, and analysts surmised that the company would deal Dunkin' Brands. Talks began shortly after the acquisition.

Pernod spokeswoman Florence Taron declined to identify any of the other bidders or say when they had been eliminated from the auction.