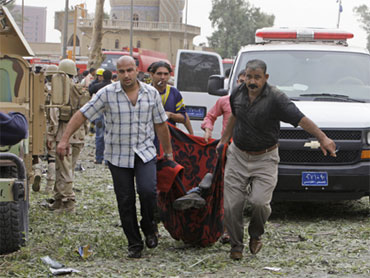 Like many a great artist, Bernard Loiseau was a fragile and sometimes tortured soul, a perfectionist tending to one of France's greatest passions: food.

The death also served as a solemn reminder of France's complex relationship to food.

Loiseau, 52, was found dead in the bedroom of his home in Saulieu, near his three-star "Cote d'Or" restaurant in France's Burgundy region east of Paris. A rifle was at his side.

Dijon Prosecutor Jean-Pierre Alacchi said suicide was "very probably" the cause of death, to be determined in an autopsy.

"All these people, all these exceptional beings who give you the impression of so much assurance, they are all very fragile, they all have such strong moments of doubt," said Loiseau's widow Dominique.

Her husband "had such a strong (moment of) doubt and, unfortunately, he was all alone for several hours and we don't know what went through his head," she said on France-2 television.

"His name alone evokes all the perfection of the culinary art and the art of living," French Culture Minister Jean-Jacques Aillagon said.

The energetic Loiseau was a pioneer inside and outside the kitchen. He was among the first chefs to promote "nouvelle cuisine," lightening thick, creamy sauces and cooking various ingredients, like vegetables, separately to maximize their savor.

Loiseau, who had three children, also became an entrepreneur, with a line of frozen foods, a boutique near his "Cote d'Or" restaurant and three eateries in Paris. He published numerous books and appeared on television.

Loiseau is the only French chef traded on the stock exchange, where shares were suspended Tuesday until further notice.

"I'm like Yves Saint-Laurent," Loiseau once said, "I do both haute couture and ready-to-wear."

Amid it all, Loiseau managed to maintain his restaurant's top three-star rating, first awarded in 1991 by the benchmark Michelin Red Guide. But the Red Guide said it was forced to issue a statement Feb. 7 to stop "all the rumors" that Loiseau could be losing a prized star.

Loiseau did lose two points, going from 19 to 17, in the 20-point rating system of the GaultMillau. That guide has gained in prestige and power in recent years.

A chorus of top chefs castigated the rating system of which they all are captive.

"He said, 'If I lose a star, I'll kill myself,'" said another three-star chef, Jacques Lameloise, who has a restaurant in Chagny in the Saone-et-Loire region.

Paul Bocuse, who said he spoke with Loiseau three times a week, predicted the chef's death would raise longer-term questions about the ratings system.

"I am sure that Bernard was very affected by the loss of these two points. We should not allow ourselves to be manipulated like that — I give you a star, I take one away," Bocuse said. "These critics are like eunuchs: They know what to do but they can't do it."

He added: "The profession is going to react."

In France, top chefs feed the soul and the senses as well as the mouth, and gastronomy is considered an art that has increasingly gained in popularity.

"Since the 1970s, chefs have become public figures," said Claude Fischler, a sociologist specialized in food and cuisine, who knew Loiseau.

"This is the generation of chefs who moved (up) from the boss's kitchen," he said. He added that the French can identify with this profession more than with others because great chefs all started, like Loiseau, as young adolescents, taking apprenticeships and, if successful, starting their own businesses.

Loiseau's death recalled the legendary 17th century Francois Vatel, said to have killed himself over a failed meal at which King Louis XIV was the star guest. The fish had reportedly arrived late.

Vatel was a sort of master of ceremonies — not a chef — but his feared ruined meal was enough to spare his honor by the sword.

The director of the GaultMillau said it was unthinkable that removing two points could have pushed Loiseau over the edge.

"Bernard Loiseau, this great French chef, certainly had other problems," Patrick Moyenobe said on LCI television. "In no way can we imagine (that) it was a grade, a simple grade, that could have taken his life."