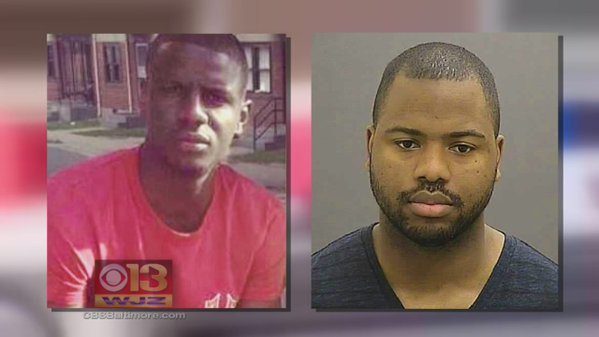 BALTIMORE -- A Baltimore judge on Wednesday rejected prosecutors' request to force an officer whose trial ended in a hung jury to testify against three of his fellow officers facing charges in the death of Freddie Gray.

It was not until this month that prosecutors indicated that they wanted Porter to testify against the three officers. Previously, they identified him as a material witness only in the trials of two other officers, Caesar Goodson and Sgt. Alicia White.

Nero, Miller and Rice face charges stemming mostly from their interactions with Gray at the first two of six stops made by the police van transporting Gray. Porter coincided with the three officers at one of those initial stops, and again with Nero and Miller at a stop the van made toward the end of its journey to the Western District station house, where Gray was found unresponsive.

Gray, a 25-year-old black man from West Baltimore, was arrested April 12. He died a week later from a critical spinal injury he suffered while handcuffed and shackled, but unrestrained, in the back of the police van. Six officers, including Porter, now face criminal charges stemming from his death. Porter was the first to be tried, in December, but his trial ended with a hung jury. He is scheduled to be retried in June.

On the stand during his trial, Porter testified that he did not buckle Gray into a seat belt, but told Goodson, who was driving the van, that Gray wanted to go to a hospital.

Judge Williams ruled in December that Porter must testify against Goodson, despite Porter's own pending retrial. Porter's attorneys appealed to the Maryland Court of Special Appeals, which postponed Goodson's trial until it decides whether to uphold or overturn the order. A hearing is scheduled for March 4.

"I don't think it's anything like a fatal blow. I think there was a skirmish today that took place. The defense won the procedural skirmish, but the trials are going to continue," said University of Maryland law professor Doug Colbert to CBS Baltimore.

Williams said he rejected the state's request to compel Porter to testify against Nero, Miller and Rice because it would result in all of the officers' trials being pushed back while the appeals court mulled whatever decision he made. Lawyers for the three officers had objected to pushing back their clients' trials.

"The state, like many of us, were not prepared for the appeals court to intervene in the criminal prosecution before a trial was held," Colbert told CBS Baltimore. "So right now I think the prosecutors are going to review this ruling, and we may be hearing more before the next trial."

Chief Deputy State's Attorney Michael Schatzow told Williams it was an oversight on the state's part not to seek Porter's testimony against all of his fellow officers sooner.

"If someone should be blamed for not having sufficient foresight, that should be me," Schatzow said.

"They want to take a hostage for five trials and torture him at his own trial," Murtha said, calling the motion "offensive."

"The state's efforts to call Officer Porter is trampling upon his ability to have a fair trial," Murtha said.

Williams said he believed the prosecutors' motion was prompted by a desire to buy more time for the other trials, not because Porter's testimony is important to them.

Allowing Porter to testify about the actions of three officers with whom he had little contact on the day of Gray's arrest would be "problematic" due to "concerns this court has over speedy trial rights," Williams said, "and finding the state's request for immunity is a way to get around this court's order."