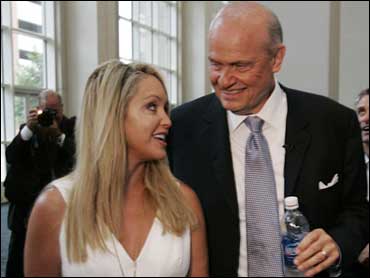 Republican presidential hopeful Fred Thompson is shaking up his still-unofficial campaign, replacing his top aide with a former Michigan senator and a veteran Florida strategist.

The shake-up comes amid consternation inside the campaign about the active role played by Thompson's wife, Jeri, a lawyer, media consultant and former Republican National Committee official.

"Rumors are rumors," said Thompson spokeswoman Linda Rozett. "It is not a personal issue. It's an organizational issue. We are strengthening the organization as we enter the next phase."

CBS News chief Washington correspondent Bob Schieffer characterized Jeri Thompson as "the driving force in this campaign," adding that so far, she just thought "they weren't getting the job done," especially in terms of raising money.

Acting campaign manager Tom Collamore will still advise Thompson, but his presidential operation will be run by the duo of former senator and energy secretary Spencer Abraham and a Florida GOP strategist, Randy Enright, according to Rozett.

Thompson, 64, is a former Tennessee senator better known as an actor in movies and on NBC's long-running drama "Law & Order." He has established a "testing the waters" committee that allows him to raise money for a presidential bid, with an official launch likely in September, after the Labor Day holiday.

Enright is a veteran operative in Florida who was part of President Bush's political operation in the key swing state; he also was executive director of the Republican Party of Iowa. Abraham served in the Bush administration after losing re-election in 2000 to Democratic Sen. Debbie Stabenow; in 2006, he joined a French-owned nuclear company, Areva Inc., as chairman of its board of directors.

Rozett said both men would be in charge of Thompson's campaign. Enright is heading the political operation, while Abraham doesn't yet have a title, Rozett said.

"Now the campaign can move to the next level with a formal announcement," Reed said.

Thompson indicated he was serious about running after disclosing he is in remission from non-Hodgkins lymphoma, a form of cancer.

Since then, he has raised several million dollars, hired staff and visited early primary states such as New Hampshire and South Carolina. On Monday, he held a $1,000-per-couple fundraiser Monday in Montgomery, Ala., that drew some of the state's top Republicans. He planned to visit Texas on Wednesday.

Details of Thompson's fundraising remain unclear, however. As an undeclared candidate, Thompson can raise money to "test the waters" without having to file public financial reports until he actually enters the race.

Thompson has a conservative Senate record and casts himself in the mold of former President Reagan. He was a reliably conservative vote against abortion, in favor of President Bush's tax cuts, for oil drilling in Alaska and against criminal background checks for gun show purchases.

He has been dogged by questions in recent weeks about lobbying work in 1991 for a family planning group that was seeking to relax an abortion counseling rule, and the changing explanations from his campaign.

He was known as an investigator, heading the committee examining President Clinton's fundraising in 1996. He won fame for another investigation, as counsel for the Senate Watergate committee in 1973, when he asked the question that revealed Nixon installed hidden listening devices and taping equipment in the Oval Office.

A review of the Nixon tapes and other transcripts showed that Thompson had alerted the White House of the investigators' discovery. The 1970s era material also showed that President Nixon and his top aides viewed Thompson as a willing, if not too bright, ally.

Thompson also has defended his work as a lobbyist for some 20 years. He lobbied for a savings-and-loan deregulation bill that helped hasten the industry's collapse and a failed nuclear energy project that cost taxpayers more than a billion dollars.

His wife, Jeri Kehn Thompson, 40, worked as a political media consultant at a lobbying firm, Verner, Liipfert, Bernhard, and McPherson and Hand. Before that she worked for the Senate Republican Conference and the RNC. She and Thompson married June 29, 2002, and have a three-year-old daughter and a 7-month old son.

Republicans familiar with the Thompson circle said she is an influential figure and that her role has been a cause of concern for some operatives signing on to the fledgling exploratory campaign.