Frank Currier is a CBS News correspondent based in Chicago and primarily covering news events in the Midwest. He reports regularly for the CBS Evening News with Dan Rather and This Morning, although he also contributes to other CBS News broadcasts, including CBS News Sunday Morning.

Currier has covered a wide range of stories for CBS News including the devastating Midwest floods of the late 1990s; the 1987 San Francisco earthquake; the crash of an Air India jetliner and the ensuing investigation; Hurricanes Gilbert, Hugo and Andrew; and the financial crises in the farm belt. He traveled to Warsaw and Gdansk, Poland, in 1983 to report on the third anniversary of the Solidarity movement.

Currier has been based in CBS News' Chicago bureau since April 1982, when he joined the Network as a reporter. He was named a correspondent in December 1985.

Currier is the recipient of three national Emmy Awards: two for 48 Hours reports - on the spread of evangelism in America (1988) and Hurricane Hugo (1989) - and a third for a CBS Evening News report on the liberation of Kuwait (1991).

Prior to joining CBS News, he was a reporter for WBBM-TV, the CBS-owned station in Chicago (1979-82). Before that, Currier worked for KUSA-TV Denver (1970-78) as weekday news anchor, general assignment reporter and executive producer/reporter of First Saturday, a newsmagazine. He also worked as an anchor for WGH Radio in Norfolk, Virginia (1968-69) and KOMU-TV Columbia, Missouri (1965-68).

Currier has received three local Emmy Awards, all while at WBBM-TV, for coverage of Pope John Paul II's visit to Chicago and a series of reports on handgun registration.

He was born October 16, 1944 in Evanston, Illinois. He was graduated from the University of Missouri in 1966 with a B.A. degree in journalism and in 1968 with a graduate degree in English. He later served as a first lieutenant in the U.S. Army in Vietnam. 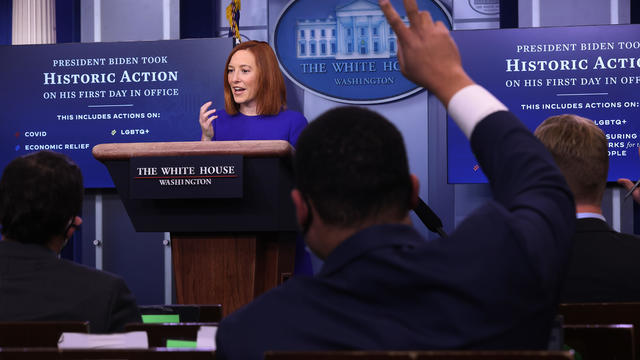 Psaki will be joined by Dr. Anthony Fauci, the head of the National Institute of Allergy and Infectious Diseases.