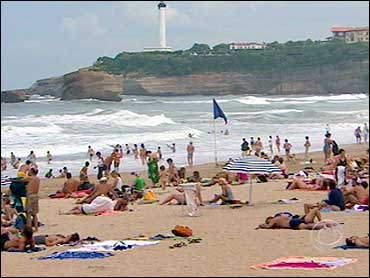 How long a vacation are you taking this summer? Two weeks? One week? A long weekend?

America is a nation of workaholics. We may all want more time off from work, but we never seem to be able to take it.

There are millions of people, though, who take endless vacations in the summer -- a month, two months, even more. We're not talking about the idle rich. These are government employees, blue-collar workers, office clerks. How do they manage this? What's their secret? They live in France, Correspondent Lara Logan reports.

Like most Frenchmen, Marchand has no guilt about taking so much time off. In fact, it's the law: full-time workers in France are guaranteed at least five weeks vacation -- guaranteed those long lazy days in the sun, and leisurely lunches in outdoor cafes.

On top of the five weeks, there are another dozen public holidays, and a maximum 35-hour work week, with no paid overtime allowed. Managers like Marchand, who work more than 35 hours a week, get more time off.

Twenty-two more days in addition to the eight weeks vacation?

Normally busy streets in Paris empty out in July and August, when most locals take their annual holiday. Shops and businesses are often deserted for a month, sometimes longer. Whole apartment buildings are shuttered when Parisians flee the city.

The French are so passionate about their vacations, they put pleasure before profit. As tourists throng the streets and summer temperatures hit their peak, Paris' most popular ice-cream parlor is closed for a whole six weeks. It's the kind of business bonanza that would be seized upon by Americans, but the French don't seem to care.

"The big difference is money, the place of money in your life," says Marchand.

Marchand says money isn't the top priority there. Maybe that's because in France things like health care and education are virtually free. But if you think the French have unlocked the door to paradise, don't start packing yet.

The 35-hour workweek, meant to create new jobs, hardly made a dent in unemployment, which still stands at more than 10 percent -- nearly double the U.S. rate. And not everyone is thrilled about working even 35 hours.

Corinne Maier, a part-time employee for the state-owned electricity company, has written a book arguing that the French should work less or at least less well. "The aim is to keep your job without working," says Maier. "It's not to go higher!"

Maier's bestseller, "Bonjour, Laziness," reveals her secrets on the art of pretending to work. The subtitle of the book is: "The art and necessity of doing the least possible in a corporation."

What is the art? "Because you have to be an actor," says Maier. "You're performing."

Did she have any idea when she wrote this book that it was going to be so popular with the French? "No," says Maier, laughing. "I'm very surprised."

Maier, who has a Ph.D. in psychoanalysis, isn't lazy. She's simply disillusioned with the French workplace, which she says values "busywork" and corporate politics over true productivity.

And her book has resonated beyond French borders. The rights have been sold to more than 20 countries, including the United States.

"Let's not forget that you wrote the book in your spare time because you're only working 20 hours a week," says Logan to Maier.

"So you must think Americans are insane?" asks Logan.

"I don't know, maybe we are an old country. We're depressed," says Maier. "But the food is very good."

But that's exactly the kind of attitude that irks French entrepreneur Ari Zlotkin, president of Anne Fontaine, a successful French blouse company. "Working for me is what, is a very important value and is a good value," says Zlotkin, who manufactures in France, but has high-end boutiques across the globe, from New York to Tokyo. And there's no doubt in his mind which country's workers he prefers.

"What about the argument that in France people have more leisure time, more time to enjoy themselves, the art of conversation, the long lunches?" asks Logan.

"I think it's a nice image. I'm not sure it's true," says Zlotkin. "What is sure is that statistically, since the 35 hours, people are staying longer in front of their TV."

"They're spending more time in front of the television?" asks Logan.

"Yeah, and also and, you know, also it's very nice to have more free time, but you must also have the money to be able to take advantage of this free time," says Zlotkin.

Ironically, some American companies, rather than being scared off by the lavish vacations and limited work weeks, are investing heavily in France. From Microsoft to Motorola, some 3,000 American companies have crossed the Atlantic, providing more than half a million French jobs.

Americans at home may still be eating freedom fries, but corporate America is buying into France.

"They come in France because they know that infrastructure is first-rate and that people are working very well in France, especially engineers," says Marchand. "We are probably one of the two or three countries in the world with the best engineers. And so in terms of technology, France is still a country that is taken very seriously by the American executives."

Some of those American executives savor the French approach to work. Katherine Melchior Ray left behind her job as a senior manager at Nike in the United States, and came to France to work in the French fashion industry. Her job is just as high-powered, but now that she's in France, she no longer works weekends, and vacation has taken on a whole new meaning.

"I don't check in, I don't check my e-mail. I don't call on the phone and no one expects me to," says Ray. "You really go on vacation."

France is still one of the world's five largest economies. When the French work, their productivity per hour is among the highest in the world, even better than in the United States. Problem is, French workers are on the job an average of 300 hours less per year than their American counterparts, so French economic growth lags far behind the United States.

"People understand very well that the French system will not survive long if it's not reformed," says Marchand. "People have to work more; for years people thought that they could work less and earn more, which is -- absurd."

Marchand says other countries in Europe are already moving in the other direction, increasing the work week without raising salaries. And France has made some minor reforms in its 35-hour work week, to allow some paid overtime. It's a question of economic survival.

"Germans are showing us the way. Germany companies are saying to their employees, 'OK, you renounce the 35-hour week or we take your jobs and we send them to Hungary, Poland, if not China," says Marchand.

"So there should be huge political support then to change it," says Logan.

"There is not a huge political support to change it," says Marchand. "It's seen as a sort of entitlement now."

So no French politician would even dare to suggest fundamental reform, like trimming those guaranteed five weeks of vacation. And Ray has been won over. She's talked herself into the idea that the French way of working – rather, not working - translates into good economic sense.

"People came back and it was like everyone had had 10 shots of espresso, they were just ready to go," says Ray. "They were like Eveready bunnies, everyone was going together and there was a team work that was inspiring."

Ray says she also takes her five weeks of vacation: "It feels great."