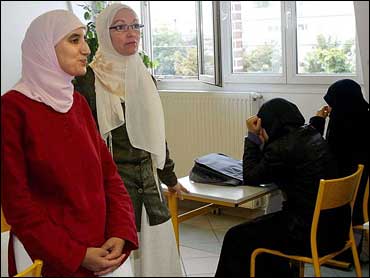 A law banning Islamic head scarves in France's public schools was adopted Wednesday in the Senate by a vote of 276-20.

The vote mirrored similar overwhelming support by the National Assembly, the lower chamber of parliament, which passed it 494-36 on Feb. 10.

President Jacques Chirac must now formally sign it into law within 15 days. He had said such a law was needed to protect the French principle of secularism.

The law forbids religious apparel and signs that "conspicuously show" a student's religious affiliation. Jewish skullcaps and large Christian crosses would also be banned, but the law is aimed at removing Islamic head scarves from classrooms.

The measure is to take effect with the start of the new school year in September.

The Senate, which like the lower house is controlled by conservatives such as Chirac, dismissed 23 proposed amendments raised in two days of debate. The amendments were offered mainly by the left.

The law is to be re-examined after a year in force to see whether "conspicuous" should be replaced by "visible."

The opposition Socialists had argued during the lower house debate that "visible" is a less ambiguous term that would make the law easier to apply.

The proposal has triggered demonstrations from Muslims around the world.

It also drew a reaction by a man identified as a top lieutenant of Osama bin Laden. An audiotape aired Feb. 24 attributed to Ayman al-Zawahri said the French measure "is another example of the Crusader's malice, which Westerns have against Muslims."

In a surprise visit to the Senate earlier in the day, Prime Minister Jean-Pierre Raffarin said France needs to explain the planned law better, especially "on the international level."

French missions abroad must "try to reassure those who are concerned," he said.

Raffarin insisted the law was needed to contain the spread of Muslim fundamentalism and ensure that the principle of secularism on which France is based remains intact.

"We wanted to send a strong and rapid signal," he said.

There are an estimated 5 million Muslims in mostly Roman Catholic France - the largest Muslim population in Western Europe.