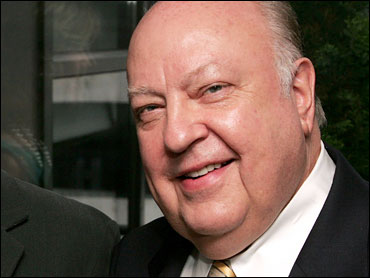 Former anchor Gretchen Carlson sued the network chief executive this month, alleging he had fired her after she refused his sexual advances. Sources now tell the magazine the leaders of Fox News' parent company -- Rupert Murdoch and his sons -- believe Ailes needs to go, after reviewing early results of an internal sexual-harassment investigation.

CBS news has not confirmed the report. Parent company 21st Century Fox said: "This matter is not yet resolved and the review is not concluded." CBS News has also reached out to Ailes's attorney for comment.

While Ailes' fate is not yet clear, according to NPR media correspondent David Folkenflik, this is a sign that "tectonic plates" are shifting in the leadership of 21st Century Fox. Ailes may have a loyal fan base for building the network into a media powerhouse, but he isn't viewed so favorably by Murdoch's sons, James and Lachlan.

"I've spoken to a number of people who have worked very closely as top executives for Rupert Murdoch and who have advised him over the years and they said, 'look if these were past times, if the sons were not helping to run the company, this would have been handled -- the interviews would have been done by probably by somebody internally and it would've been put in a file somewhere and never heard from again,'" Folkenflik said.

When the network was slammed by a similar lawsuit in 2004 accusing Fox News star Bill O'Reilly, it made a settlement with a seven-figure payment and sexual harassment training. But now, it's a "different time and different moment," as Folkenflik puts it, and the network has now moved on from "that template," hiring a top New York City law firm instead of in-house lawyers to handle the investigation.

According to Folkenflik, that's because as Murdoch's sons attain more power in the company, they don't see Ailes fitting into their vision for a "21st century company."

"While [James Murdoch] admires the record and role that Roger Ailes played in really creating Fox News and the profits that it's generated, he doesn't see Roger Ailes, in his mid to late 70s, as representing a forward-looking 21st century face for what his company will ultimately represent," Folkenflik said. "Similarly, Lachlan Murdoch, his other son, they have incredible infighting, Roger Ailes and he, and they've kept these grudges for many years."

"They've seen an opening to make allegations and accusations that might not have been listened to in times past. Because someone as prominent as Gretchen has done this and because she's done it in the context of a court case, and so it's sort of become a topic that one is allowed to explore," Folkenflik said.

Fox News anchor Megyn Kelly has remained conspicuously silent amid the wave of allegations. But New York Magazine reported Tuesday that Kelly has told investigators that Ailes made unwanted sexual advances towards her about ten years ago when she was a young correspondent at Fox.