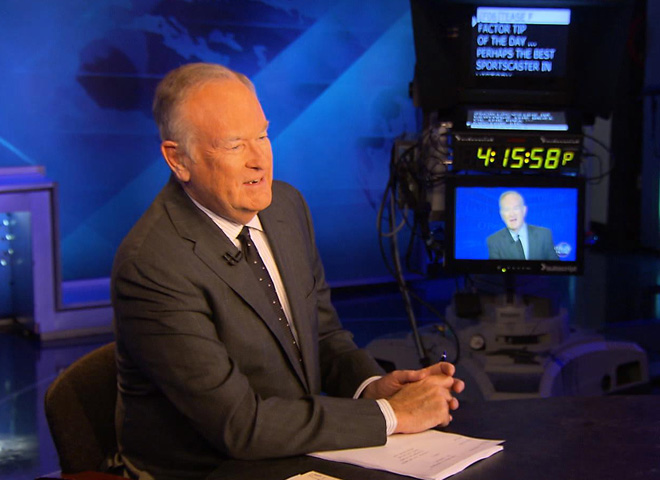 You might say cable news anchor Bill O'Reilly is making history, writing one bestseller after another -- books that focus on critical moments in history. The top-rated host sat down with Mo Rocca to talk about his books, his show and, of course, his take on our times:

Bill O'Reilly is a big history buff -- and he's got the paper to prove it. His collection of memorabilia includes letters from Thomas Jefferson ("It defines Jefferson's view of Christianity. But this is the only letter that I've ever seen that deals with Jefferson and the spiritual, 'cause he is considered a very secular person"), Paul Revere ("This is a letter written by Paul Revere, by himself, talking about him making cannon for the U.S. Constitution"), and Ben Franklin ("Franklin got a lot of people in trouble because he was running around with all the ladies in London and Paris!").

Quite a collection, but he can easily afford it. After all, O'Reilly is indisputably the biggest name in cable news.

Every weeknight he assumes his perch as host of Fox News' "O'Reilly Factor," a show that he, and he alone, scripts.

"I never had writers' block," he said. "I never took a writing class."

"But that's a rare thing for the words to come out that freely," Rocca said. "I mean, a lot of talented people, it just gets stuck in there."

"ISIS is not going to stop killing people!"

That gift has kept O'Reilly on top of the ratings for 16 years.

But current events aren't O'Reilly's only worry. He is concerned about young people's knowledge of history, which he calls "a red alert."

"Those of us who were brought up in the '50s, '60s, '70s, we were taught that a country is valuable and you respect your country," O'Reilly said. "Now you don't even talk about your country. It's not even in the public schooling hardly anymore."

O'Reilly should know; after graduating from Marist College in 1971, he took a job teaching history to high schoolers.

"And what I did was, I managed to get them interested in history, when they couldn't care less about it before they got in my class, by making the people real. By saying, 'Hey, George Washington, he wasn't some old doddering guy looking at you from the one-dollar bill. This guy would beat the living daylights out of you if you got out of line!' Boom, the heads go up."

He takes that same approach in his "Legends and Lies" TV docudrama -- emphasis on the drama -- and its companion book. "So we give you the story, but we give it to you with a heavy dose of personal and emotional flow."

History told with what he calls a "novelistic flair" has worked out very well for O'Reilly. His last five books, co-authored with Martin Dugard (including "Killing Kennedy," "Killing Lincoln," "Killing Reagan," and "Killing Patton") have all, well, made a killing. And coming soon? "Killing the Rising Sun."

Rocca asked, "When will the killing stop?"

"We have three more to deliver, all very controversial," O'Reilly said.

Can he tell us? "I can't say, because if I do, then somebody else writes the book ahead of me!"

Readers can't seem to get enough of the series, but as O'Reilly said, "If you look at all the reviews for all of my books, they're the worst books on the face of the Earth. Very rarely does anybody say anything good about my books."

"Why do you think that is?" Rocca asked.

"Do you think that's jealousy?"

"No, they just don't like me. I'm a cocky -- 'Who is this punk, O'Reilly, writing about history and outselling everybody in the world? Does he have a Ph.D.?'"

But it's not just reviewers who have had problems with his books. In "Killing Reagan," O'Reilly claimed that the 1981 assassination attempt on Ronald Reagan may have led to a steady mental decline that worried senior aides enough to evaluate his very competency.

Rocca asked, "And so you stand by the assertion that he was, what, nearly removed from office under the 25th Amendment?"

"No. They were looking at him, all right, to see if further action had to be taken. And there was this meeting, and he was given policy questions. And he rose to the occasion and allayed everybody's fears."

But the book drew a sharp rebuke from O'Reilly's Fox News colleague, George Will. Their on-air exchange was not a friendly one.

Rocca said, "The way you called George Will a hack ... I mean, you really dug in on it. How did you feel about that confrontation?"

"It was an honest confrontation," O'Reilly replied. "He didn't have anything. He had nothing. I destroyed him."

It's that kind of passion -- or bluster, depending on your viewpoint -- that's made the 66-year-old O'Reilly stand out for so long.

"I've been doing this 20 years. I don't care what you think about me. I couldn't care less what anybody thinks about me."

"You said, 'I never really had that gene about wanting to be liked.' I don't believe that."

"Well, because you wanna be liked!" O'Reilly said.

"I mean, you're failing in that regard, but you wanna be liked."

"It doesn't matter. I don't go home saying, 'How many people liked me tonight?' We have an enormous audience, okay? I believe that if they watch me, 90% of them respect me. That's what makes me happy."

That "tell it like it is" style may remind you of another big personality who's a frequent guest of O'Reilly's.

So, does he consider Donald Trump a friend?

"You know, I would, I guess. I've known him a long time, and we go to ball games and we have some fun. But I'm not hangin' with him.

"But that sounds like you're describing, in part, a spoiled brat."

"I didn't like the John McCain stuff. John McCain's a hero. He suffered greatly for his country."

"What's something that Hillary Clinton has said that's made you wince?"

"I don't like her calling people misogynists and racists. I think it's disingenuous. I don't think she knows the people, and I just think it's cheap."

Over time Bill O'Reilly says his take on all politicians has changed. "I've become more cynical as I get older because I know the players in Washington, and I know their motivations," he said. "And I don't like it."

"I think you probably thought they were selfish from the beginning," Rocca said.

"I didn't. I came up in the Vietnam era when the SDS and 'America was bad' and LBJ, 'How many kids you kill today?' and all that. I never really bought that. But I always felt that most of our elected officials had the folks in their sights, wanted to do the right thing. I no longer feel that."

"If the founding fathers were here today, what do you think they'd be impressed by?"