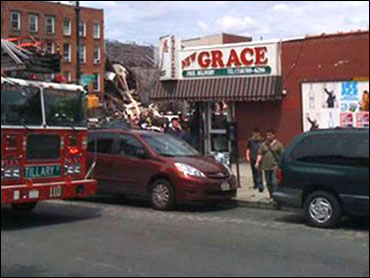 The city is investigating the collapse of a 4-story building in Brooklyn that injured four people and led to the evacuation of six adjacent buildings on Sunday, authorities said.

The Fort Greene building, which weeks earlier had been cited by the city for cracks that ran from the ground floor to the roof of one wall, came crashing down at about 2 p.m., the city's Fire Department said. No one was in the structure when it fell. The building housed a bar on the ground floor and apartments above.

Jim Mutton, 42, told the New York Post that he saw the building fall.

"It leaned to the right and systematically came down," he said, adding that he saw a handful of people flee the building just before it collapsed.

It was a terrifying day for residents of the building. One wall came crashing down after another before the building completely collapsed, reports CBS Station WCBS in New York.

All six people who live inside the building, have been accounted for. But neighbors say there were warning signs, WCBS reports.

The owner of the building says that just moments before the walls came crashing down, a tenant called to say bricks were falling off the building.

"My tenant on the second floor said, 'Things are falling off the wall,' so I told him, 'Go outside, don't go back in,'" owner Michael Sang told WCBS.

It most likely was a warning sign, the bricks falling from the building," Deputy Assistant Fire Chief John Sudnik said.

The Fire Department said that four people had minor injuries. Three refused medical attention; one unidentified man was taken to Brooklyn Hospital with an arm injury.

Several families were displaced from adjacent buildings as inspectors checked to make sure that there was no physical damage to them and that they were safe, the Fire Department said.

The city issued Sang a violation on May 1 for failure to maintain an exterior wall, which had vertical cracks, said Buildings Department spokesman Tony Sclafani. A report noted that there were "separation cracks" on the interior between the third and fourth floors.

Several residents told WCBS about cracks in the building that had not taken care of.

Sang was scheduled to appear in court on Monday for a hearing about that violation. He told the New York Times that the hearing had been postponed to allow time to repair the problems. He said that the Buildings Department had inspected the problems last month.

"They said there was a crack but that it was OK to have tenants," he told the Times. He said he bought the building in 2006 and that a crack had been there for 10 years.

One tenant, Anh Nguyen, had returned home to find the building in pieces. The 28-year-old said he lives on the third floor and that he had lost "everything."