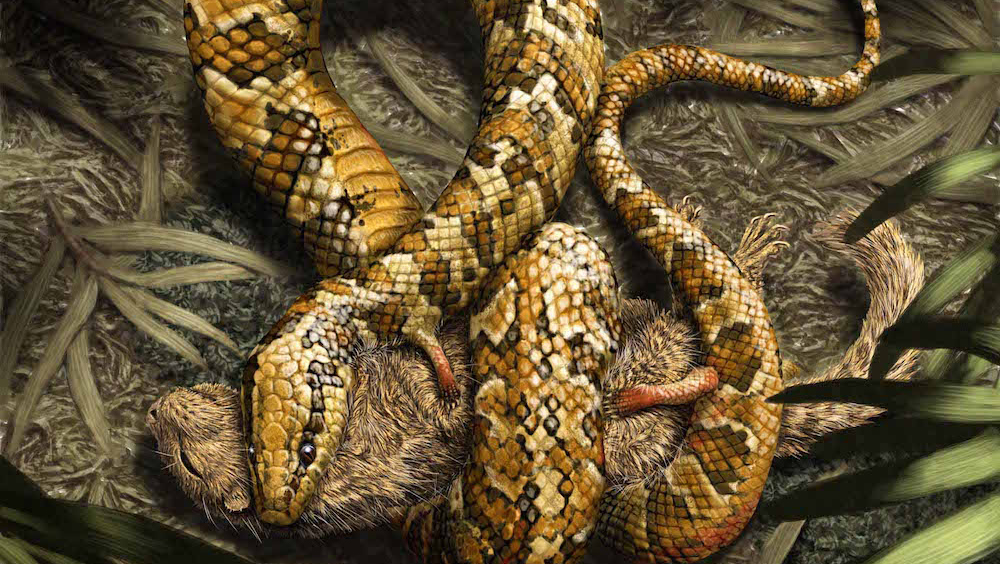 The oldest snake fossil on record looks almost like a modern snake, except for one glaring difference: It has four feet, each with five digits, a new study finds.

The roughly 120-million-year-old snake, dubbed Tetrapodophis amplectus (literally, four-legged snake), likely didn't use its feet for walking. Instead, the appendages may have helped Tetrapodophis hold onto a partner while mating, or even grip unruly prey, said study co-researcher David Martill, a professor of paleobiology at the University of Portsmouth in the United Kingdom.

Previous research has detailed two-legged snake fossils, but this is the first known snake ancestor to sport four legs, he said. It likely evolved from terrestrial-burrowing creatures, and was a transitional animal that lived during the shift from ancient lizards to modern-day snakes, he added. [See Photos of the Four-Legged Snake Fossil]

"We've found the ancestor of all snakes," Martill told Live Science. "We have found the missing link between four-legged lizards and snakes."

Martill happened upon the fossil during a field trip with his students to the Solnhofen Museum (formerly known as the Bürgermeister-Müller-Museum) in Germany. As they were looking at an exhibit of fossils from the Crato Formation, in northeastern Brazil, Martill noticed the 7.8-inch-long (20 centimeters) snake. It had a plaque that said "Unknown fossil."

The Crato Formation happens to be one of Martill's prime subjects. He is the author of "The Crato Fossil Beds of Brazil: Window into an Ancient World" (Cambridge University Press, 2008), so he knew that a snake from the Crato Formation would be "about 20 million years older than any other fossil snake," he said.

Intrigued, he leaned in closer to the display to get a better look.

"I thought, 'Bloody hell, it's got back legs!'" Martill said. "It had front legs. Nobody had ever seen a snake before with four legs, and yet evolutionary theory predicts that there should be an animal that is transitional between four-legged lizards and snakes, and here it was."

Martill asked the museum if he could study the fossil, and recruited Helmut Tischlinger, a German paleontologist, and Nicholas Longrich, a senior lecturer in evolutionary biology at the University of Bath, to help him decipher the fossil.

The researchers found several indications that the fossil is, in fact, a transitional snake. Unlike lizards and crocodiles, Tetrapodophis has faint impressions of a single row of belly scales, a signature still seen on snakes today.

It's likely that Tetrapodophis used its long body to constrict prey, such as lizards and frogs, Martill added.

Moreover, the fossil had other classic snake features, including a short snout, long braincase, elongated body, fanged teeth and a flexible jaw that could swallow large prey, the researchers said. It also has a similar vertebrae column that allows the snake to be extremely flexible, they said.

However, Tetrapodophis doesn't have a long, laterally compressed tail that is usually seen in marine animals, which suggests that it descended from burrowing terrestrial, and not marine, creatures, the researchers said. [Image Gallery: Snakes of the World]

Tetrapodophis and other ancient snakes hail from Gondwana, the ancient supercontinent that covered the Southern Hemisphere. (A January study reported snake specimens that were from the Northern Hemisphere, but Martill says it's unclear whether these are snakes or lizards.)

"Snakes are all over the planet now, and it would be nice to know where they actually started," Martill said. "If you look at the distribution of fossil snakes, they're all Gondwanan. So it does look as though snake evolution began in the southern continents."

Allison Hsiang, a postdoctoral researcher of geology and geophysics at Yale University who was not involved in the study, called the newly identified fossil "really cool and important."

"It fills in the picture that we always kind of knew was there, but here's the evidence of snakes evolving from lizards with four legs," she said.

The study was published online July 23 in the journal Science.