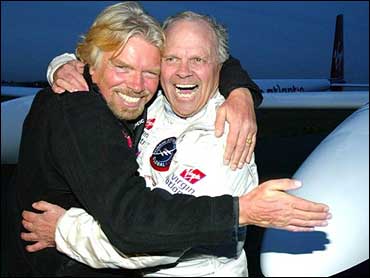 Adventurer Steve Fossett completed the longest nonstop flight in aviation history with an emergency landing Saturday, flying 26,389 miles in about 76 hours but stopping early because of mechanical problems.

He then was forced to land the Virgin Atlantic Global Flyer at Bournemouth International Airport, in southern England, instead of at a military air strip in nearby Kent because of generator problems.

"I was really lucky to make it here today, there was a lot going on," Fossett told reporters after he landed. "The tension of the final part really took it out of me, but I will be fine in the morning."

"He burst two tires on landing and the poor Global Flyer had to be dragged off the runway," said Steve Ridgeway, chief executive of Virgin Atlantic, the company sponsoring Fossett's record bid.

The millionaire adventurer completed his journey around the globe, and then some, over 3 days despite losing about 750 pounds of fuel during his takeoff Tuesday from the Kennedy Space Center in Florida because of a leak.

In-Flight Interview
Steve Fossett talks to CBSNews.com's Mike Wuebben from the cockpit of his global flyer about his quest to break the non-stop flight record.

The plane's ventilation system also malfunctioned midway through the trip, causing temperatures in the 7-foot cockpit to rise to as much as 130 degrees. Fossett was forced to drink a large part of his water supply earlier than planned because of the heat, his flight team said.

Weak winds over the Atlantic and severe turbulence over India, which at one point forced Fossett to strap on a parachute, prompted fears Fossett would have to ditch his record-breaking attempt in Newfoundland.

Instead, his flight team altered his projected route, having Fossett cross Florida, where he had begun his nonstop journey Wednesday, and take a southerly path on the flight's last leg to take advantage of better winds.

Early Saturday, Fossett decided to try to finish the trip after reaching the middle of the Atlantic.

His voyage broke the airplane distance record of 24,987 miles set in 1986 by the lightweight Voyager aircraft piloted by Dick Rutan and Jeana Yeager, as well as the balloon record of 25,361 miles set by Brian Jones and Bertrand Piccard in 1999.

Fossett already holds the record for flying solo around the globe in a balloon and for being the first person to circle the globe solo in a plane without stopping or refueling. That flight last year lasted 67 hours and was hampered by a fuel leak.

While in the air, Fossett took power naps no longer than five minutes each and drank a steady diet of milkshakes. His plane was equipped with a parachute pack holding a one-man raft and a satellite rescue beacon.