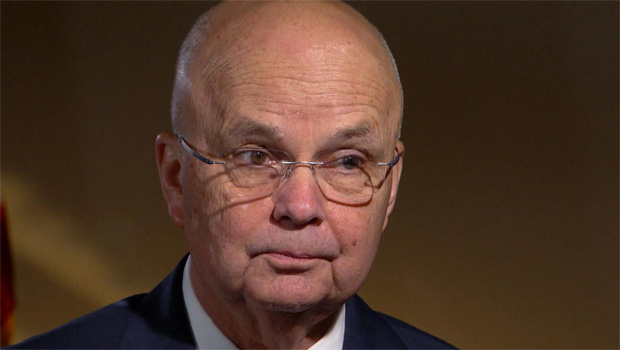 How far should our national security agencies go in the war against terror? Former CIA Director Michael Hayden puts his views on the line in a conversation with CBS News national security correspondent David Martin:

Football fans know Heinz Field as the home of the Pittsburgh Steelers. Former CIA Director Mike Hayden sees something else there as well. The stadium's parking lot is located on the site of his boyhood home.

The Steelers may have paved over Hayden's working-class neighborhood, but the city of Pittsburgh made up for it by naming a street after him -- the local boy who rose to the top of American intelligence.

He has been in the middle of just about every controversial intelligence operation of the first decade of the 21st century. So what, Martin asked, did you learn?

"Both the power and the limits of intelligence," he replied.

He is the only man to head both the National Security Agency (with its almost incomprehensible power to monitor communications) and the CIA. Hayden's memoir is called "Playing to the Edge," where the power of intelligence meets the limits of the law.

"Fundamentally, we're going out there stealing information we are not otherwise entitled to," Hayden said. "Now, we do it to foreigners. We don't do it to our own citizens; they're protected by our Constitution. But unarguably, we're out there stealing other people's secrets."

A lifelong Steelers fan, he used their practice field to make his point to Martin: "We were playing right up to the line, and we knew it."

In the months after 9/11, Hayden set up an operation called Stellar Wind, under which NSA eavesdropped on Americans suspected of communicating with terrorists overseas.

"You've got a moral responsibility to use all the authorities that you've been given, and that is especially true when you think you're in a national emergency like we were after 9/11," he said.

Drone strikes against suspected terrorists also began after 9/11 -- another operation on the edge.

"There aren't many other countries on Earth who believe the American legal theory for targeted killings," Hayden said. "That we can use unmanned aerial vehicles for precision strikes, outside of internationally accepted theaters of conflict, I'm very happy with it, content with it, legally and morally."

As head of the CIA from 2006 to 2009, Hayden had to personally approve those drone strikes. He remembers one in particular, against Abu Khabab al-Masri, a master bombmaker and chief of al Qaeda's WMD program.

"We had him, quote unquote, within our sights, but he was with members of his family," Hayden said. "He actually had a grandson sleeping near him. And so as part of our intelligence contribution to the operation, you are engineering what weapons could be used, what's the probability of kill for those weapons, and it was going to be a very close call as to whether or not we could kill the target and spare the grandson. We did everything we could."

"We failed. We killed him, but the grandson died also."

"And you can live with that?" Martin asked.

"I can," Hayden replied. "And I can say I can without any sense of being cavalier. I have grandchildren, too."

That's a long road for a Catholic altar boy to travel, but he can still go home again, and hobnob with his old junior high football coach -- Dan Rooney, chairman of the Pittsburgh Steelers.

Tucked away behind six Super Bowl trophies is a wall of Steeler greats, including the young Mike Hayden, who helped with the team's equipment.

Thirty-five years later, he became Director of the National Security Agency, right in the middle of the information revolution. NSA, which had spent the 20th century intercepting communications that went through the air, started stealing information from other countries' computer networks.

"It was sitting there for the taking, if you could just get there to grab it," said Hayden.

"The image of the NSA is linguists with headphones, listening," said Martin. "Now you're talking about hackers."

"You're going from listening to breaking and entering."

Last year, when China hacked into the Office of Personnel Management and stole the private information of millions of government employees, U.S. officials treated that as an outrage.

To Hayden, it was a nifty piece of work.

"If I could have done that against someone else, against China, while I was director, I'd-a done it in a heartbeat. No shame in that."

Hayden laughed. "No. You'd have heard about it if we had. But we would have if we'd had the chance"

"Yep, that's right. Once you're in a network you can do a whole bunch of things to that network. It's just that NSA doesn't have the authority to do that."

NSA does not have the authority, for instance, to crash the computers which run another country's air defense system. That's an act of war -- the job of the U.S. military.

So in 2005 NSA Director Hayden-- who also happened to be an Air Force general -- became the first head of what is today called Cyber Command.

"Somebody's been working on these cyber weapons," said Martin. "Was that you?"

"Yeah. We were developing ways to do things, and so we created this stable of weapons."

"'Stable of weapons.' You're out there stockpiling cyber weapons. Can you tell me about any computer network attacks that you pulled off?"

"No. Because this is so hideously over-classified it's hard for us to have an adult discussion about what it is we are doing, or are not, doing," Hayden said.

"So let's take down this call of secrecy. How powerful are cyber weapons?"

The now-famous 2010 Stuxnet attack mounted by the U.S. and Israel against computers which controlled Iran's unranium enrichment centrifuges spread to networks in more than 100 countries -- including the U.S.

"What is keeping other countries from taking down our networks?" Martin asked.

"Number one, it's not as easy as it looks. Number two, you have to think why would they want to do, we are a very powerful nation. It may not be in their interests to make us really, really angry at them."

"And what about a terrorist group?"

"Yeah, isn't it interesting? I know of no terrorist group using a cyber weapon to affect physical destruction," he replied, "and here I'm talking about the al Qaedas and ISISes of the world. And then the follow-on question I usually get is, why? And the follow-on answer I usually give is, I have no idea, but they haven't done it yet."

Because of capability? "These guys are cyber smart," said Hayden. "They use the web for everything else. You would think within their legions that they would have the talent to do this. I just can't explain why it hasn't happened."

Hayden is out of government now, working as a consultant to corporations doing business in the age of terror and cyber attacks. The only time he's in danger of stepping out of bounds is on the practice field. You might say he's backed away from the edge.