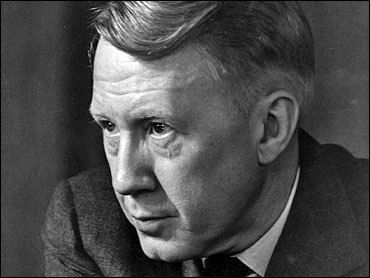 Longtime CBS president Dr. Frank Stanton, who helped mold the company into a symbol of excellence reflected in its "Tiffany Network" nickname, died Sunday afternoon at his home in Boston. He was 98.

He was the master builder of CBS, turning an also-ran radio network into a broadcasting powerhouse under company architect and founder William S. Paley, who appointed him president in 1946.

Stanton was known as the "conscience of broadcasting" for his battles for First Amendment rights and the unwavering support of the journalists who worked for him.

"Like the CBS Eye logo that he unveiled in 1951, Frank Stanton was an American icon, recognized and respected around the world," said Leslie Moonves, the President and Chief Executive Officer of CBS.

"Broadcast journalism thrives today, to a large extent, because Frank Stanton defended our rights under the First Amendment and guided us through the most dangerous crisis this industry ever faced," said Sean McManus, President, CBS News and Sports.

Stanton had several run-ins with Washington over the years, but the one in 1959 over the quiz show scandals established him as television's leading statesman.

The allegations of staging in America's popular game programs attracted the glare of government and prompted him to take drastic measures to convince politicians that the new medium could police itself. Stanton investigated, took responsibility for problems, and then, risking lawsuits from sponsors, canceled all of CBS' high-stakes and high-profit game shows.

He also demanded that everything broadcast by CBS News be exactly as it purported to be, laying down the foundation for the CBS News Standards still followed today. The industry avoided government control, mostly because Stanton prosecuted the issue so vehemently himself.

"Frank Stanton undoubtedly was one of the great leaders in the development of radio and television," said former CBS News anchor Walter Cronkite. "His principles became the ethics of broadcast journalism."

Stanton's most public battle for free speech came near the end of his tenure as president when he stood up to the U.S. government in a First Amendment battle that became a landmark case.

He defied a U.S. House of Representatives subpoena for outtakes of a CBS News documentary in a move that solidified his status as the leading defender of broadcast journalism's equal status with print under the First Amendment.

Likening them to print reporters' notebooks, he told the full U.S. House in front of a television audience that he would not turn over outtakes from "CBS Reports: 'The Selling of the Pentagon,'" a 1971 report critical of the defense department.

It was a risk that could have put him behind bars, but after two days of hearings, House members in a roll call voted 226-181 not to hold CBS and its president in contempt.

"He was very courageous and he was principled and he never let us down," said former 60 Minutes executive producer Don Hewitt.

Stanton was cited with his fifth Peabody award for this vigorous defense of broadcast journalism.

"The spirit and the purpose of the first amendment … is to protect not the government, not the press but the people," Stanton once said.

In 1963, after the assassination of President Kennedy, Stanton kept CBS News on the air for four straight days without commercial interruption. In 1971, he risked going to jail to keep CBS documentary notes and "out-takes" from congressional scrutiny.

As the late CBS News chief Dick Salant once remarked, "Stanton was the best non-practicing journalist who ever lived."

Born in Muskegon, Mich., on March 20, 1908, Stanton grew up in Dayton, Ohio, and attended Ohio Wesleyan University as a pre-medical student. He put himself through college by working in the advertising department of a Dayton retailer.

He was graduated from Wesleyan with a B.A. in 1930 and taught typography for a year at a trade school before accepting an offer from Ohio State to teach psychology. There he earned his masters and doctorate, both in psychology, before resigning his post to join CBS in October 1935. He married the former Ruth Stephenson in 1931; she died in 1992.

Stanton had no immediate survivors.