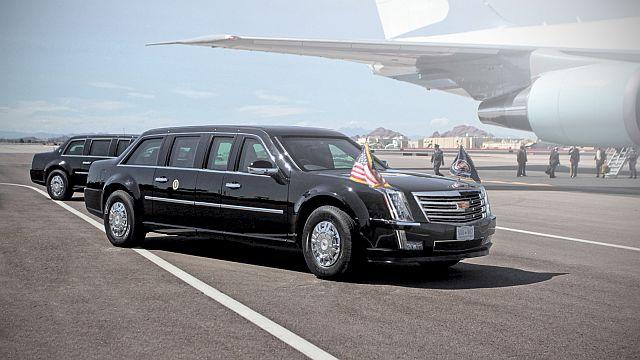 In a dust-up with Boeing (BA) last week, President-elect Donald Trump tweeted a threat to cancel the order for the new version of Air Force One. He groused that the new presidential jumbo jet was becoming too expensive. But when it comes to the next president’s ground transportation, it’s a little late for any cancellation. The new presidential limousine was ordered three years ago and is expected to be ready for Mr. Trump’s inauguration next month.

The car that will roll down Pennsylvania Avenue on Jan. 20 will look something like the photo above, according to a rendering done by Autoweek. General Motors (GM) is building the heavily armored vehicle that’s expected to have a front end resembling a Cadillac Escalade SUV. But the Cadillac resemblance ends there. The rest of the vehicle is set on a medium-duty truck frame with custom-made body panels.

Informed estimates put the cost for each vehicle between $1 million and $1.5 million. Compared to the cost of a new Air Force One, that may seem like Trump change. But the president doesn’t get just one of these limos. The Secret Service reportedly maintains a fleet of identical cars so that one can always be flown to the site of a domestic or foreign visit and be ready to transport the president when he arrives.

Exact specifications are, of course, a state secret. But it’s a safe bet that the vehicle is bulletproof, can withstand small bombs and has an independent air supply in case of a chemical or biological attack.

Inside, the presidential state car can seat up to seven in the passenger compartment or five with tables down for conference-style seating. But typically, the limousine will carry just the president, a couple of aides and perhaps a state governor or other official welcoming the commander-in-chief.

GM did not respond to a request for confirmation that the new limo will be ready for the inauguration, even though that was said to be the target delivery date ever since the new limo was ordered three years ago.

Unlike many projected Trump policies, the new wheels won’t be that much of a departure from the existing vehicle that has transported President Obama since 2009. Its nickname at the White House is “The Beast.” In an appearance on Jerry Seinfeld’s show Comedians in Cars Getting Coffee, President Obama told Seinfeld that the car was “a Caddy, basically on a tank frame.”

Presidential limousines have a long history. Franklin D. Roosevelt got the first car made to Secret Service specifications in 1939 -- a Lincoln convertible known as the Sunshine Special because the top was usually down.

Open presidential cars remained the norm until after the 1963 assassination of President John F. Kennedy while riding in a convertible in Dallas. Since then, the presidential cars have been closed, with each new generation equipped with increasingly robust security measures.