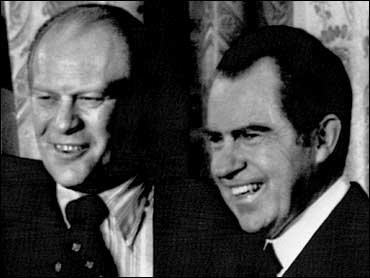 While President Ford was being remembered fondly, controversy continues to swirl, more than 32 years later, around one of his first major acts in office.

Before he pardoned Nixon for his involvement in the Watergate scandal, Ford received two pieces of paper from Al Haig, Nixon's chief of staff, which outlined how Ford would go about pardoning the president. Even today, speculation persists that there was a deal between Nixon and Ford that would get the presidency if he promised to keep Nixon from going to jail. Haig firmly denied that rumor.

"Why would a rational man who had just heard that he's about to be president risk everything by doing something like that? Doing a conditional deal?" Haig told Face the Nation moderator Bob Schieffer. "He was going to be president no matter what. That was a simple fact. And he was smart enough to know it."

Ford's former chief of staff, James Cannon, said Ford resisted the word "deal" when talking about how he came to pardon Nixon, but it appeared to him that the nature of the pardon smacked of quid pro quo. Cannon said members of Ford's staff told him not to pardon Nixon because it would appear to be a deal.

"It looks to me like, if you take two pieces of paper, one of which says this is your power to pardon and this is a blank form for a pardon, that looks pretty much like a deal," Cannon said.

"The one subject where his private comments were exactly the same as his public comments to me over a period of 30 years, 25 years, was the question of the pardon," New York Daily News reporter Tom DeFrank said. "He always said there was no deal."

Ford said he pardoned Nixon in order to help the nation heal, but many people felt that the disgraced president should have been held accountable for the crimes associated with his re-election campaign.

Ben Bradlee, who was the editor of the Washington Post when the paper helped unravel the Watergate scandal, said he would have preferred to see Ford wait awhile before pardoning Nixon, but that it was ultimately good for the country that he did. But more importantly, Bradlee said Ford was a "compulsively decent man," and that fact should lie at the heart of his legacy.

Last week, Washington Post reporter Bob Woodward said Ford told in 2004 that he was very opposed to the war in Iraq and that he thought it was unjustified. Woodward also said that Ford criticized former secretary of defense Donald Rumsfeld and Vice President Cheney, who both worked for President Ford as young men.

"I was very surprised about it," DeFrank said. "Because I had four interviews with Gerald Ford after the war in Iraq began, '03, '04, '05, end in May of '06. And in every one of those interviews, he told me he supported the war in Iraq."

DeFrank, who covered Ford when he was president, said he saw him on Nov. 14. The only point where his reporting and Woodward's intersect is about weapons of mass destruction, DeFrank said.

"President Ford told me in May that he thought it was a big mistake for President Bush to have pegged the invasion of Iraq to the WMD issue," DeFrank said.

Although DeFrank said Ford was supportive and defensive about Rumsfeld and Cheney, James Cannon, former Newsweek editor and Ford White House staffer, said Ford felt the Republican party had gone too far to the right.
"He was a true conservative, certainly a true conservative fiscally, and but he was much more of a moderate person on social issues," Cannon said. "I think he deeply felt that the party had left him. He was still where he was. The party had gone to the extreme right."