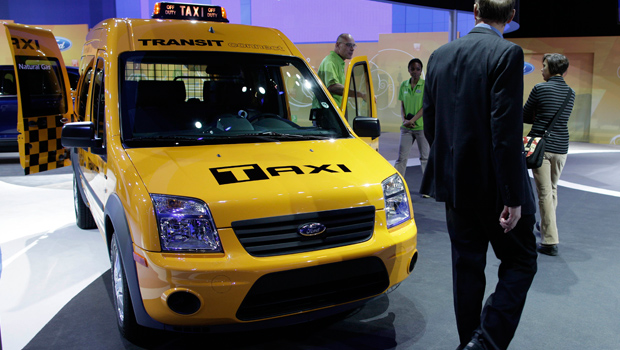 It's the latest sign that natural gas is making inroads as a transportation fuel, particularly for truck fleets, buses and taxis. The consumer market is tougher to crack, but sales are gaining there as well.

Natural gas is cheap and plentiful in the U.S. after a spike in production that began in the middle of last decade. At the same time, the price of gasoline and diesel fuel has jumped more than 30 percent.

But while natural gas may be a good choice for snow plows and trash trucks, which go relatively short distances and can refuel at city-owned pumps, it's a tougher call for ordinary consumers. Natural gas cars cost more and there are few public places to refuel them. Those issues need to be addressed if the vehicles are to significantly boost their share of the auto market, which is currently less than 1 percent.

During those five years, new technology unlocked vast reserves of natural gas in deep rock formations, creating a glut that has depressed prices. Compressed natural gas - or CNG - now costs between $1.79 to $3.49 per gallon in the U.S. depending on the location, compared with an average of $3.74 for gasoline and $4.12 for diesel, according to Clean Energy, which operates natural gas fueling stations, and AAA.

It's even cheaper for corporate or government buyers, who may pay as little as 80 cents per gallon for their natural gas, according to CNG Now, an industry lobbying group. In the U.S., CNG is sold in units that have the energy equivalent of a gallon of gasoline.

No one is quite sure how many natural gas vehicles are on the road. Honda and Chrysler are the only companies that make CNG-ready vehicles in their own factories. Ford and GM make vans and trucks that are prepped to run on CNG, or on a combination of gasoline and CNG, but rely on outside companies to add about $10,000 worth of equipment, including the natural gas tank. Some drivers convert their cars and trucks on their own.

GE, which is currently developing a home fueling station, estimates there are 250,000 natural gas vehicles currently in use in the U.S.

Dave Hurst, a principal research analyst with Pike Research, a division of the consulting firm Navigant, estimates that 20,381 natural gas vehicles were sold in the U.S. in 2012. Ford sold more than half of those, but big truck makers like Navistar and Freightliner and bus makers like New Flyer were also in the mix. Hurst estimates that 1,600 CNG buses and 1,500 CNG garbage trucks were sold last year.

Hurst expects CNG vehicle sales to grow by 10 percent per year through 2019, when he's forecasting sales of 39,864. In a market where 16 million new cars and trucks are sold each year, that's still less than 1 percent. But Hurst expects to see steady demand from governments and other fleet buyers and new offerings to meet those demands. For example, Ford plans to release a CNG version of its Lincoln MKT crossover - which is sold to limousine companies - in 2014.

Range is also a concern. The U.S. has 1,100 natural gas fueling stations and only about half are open to the public. A natural gas Civic can go around 200 miles on a tank. That's better than an electric car, which might go 100 miles on a charge. But it's less than the 300 to 350 miles a driver can go on a tank of gas in a regular Civic.

All those things could change. GE is trying to develop a $500 home fueling station, and the federal government could encourage sales with tax credits, as it has done with its $7,500 electric vehicle credit. Some states are already giving tax credits to CNG vehicle buyers, including West Virginia - which gives up to $7,500 for smaller vehicles and $20,000 for trucks - and Colorado, which gives up to $6,000.

"Once we get a good home refueling station, you'll never have to go to a gas station again unless you like their coffee," said Jon Coleman, Ford's fleet sustainability manager. Coleman thinks sales to individuals will one day outpace sales to fleets because natural gas is so plentiful and is already being piped into millions of homes.

For now, Coleman works mostly with corporate and government fleets, which appreciate the stability of natural gas prices compared with gasoline.

Irving, Texas-based oil and gas company Pioneer Natural Resources recently ordered 250 F-250 pickups that can run on a combination of gas and natural gas. The company already has 50 bi-fuel vehicles, and wants to convert most of its fleet by 2015, according to Lynn Lyon, Pioneer's director of fuel market development.

Lyon, who uses a bi-fuel F-250 as her personal vehicle, says it seamlessly switches between gas and natural gas and is easy to fill up. But more important, the company is paying $2 less per gallon than if it was only buying gasoline, she said.

"People will drive across town to save 10 cents a gallon at the pump. What would you do to save $1 or more?" she said.