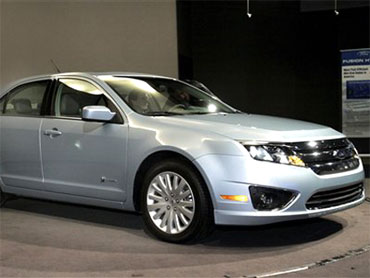 The National Highway Traffic Safety Administration opened a preliminary investigation Friday after receiving three such complaints involving unsecured all weather floor mats. There are no reports of crashes or injuries.

A Ford spokesman, Said Deep, said the problem was due to drivers stacking all-weather mats on top of floor mats that come with the vehicle. Ford's all-weather mats have warnings advising customers not to pile them and to secure them properly to the floor, he said.

The issue is similar to Toyota's problems with floor mats that led to the recall of more than 5 million vehicles worldwide. In those cases, drivers said their vehicles sped up when pedals became lodged under all-weather mats that were stacked on top of the floor mats.

To solve the problem, Toyota shortened its gas pedals and took out some of the carpet padding below the pedal.

Safety officials said the investigation covers about 250,000 Fusions and Milans. The preliminary investigation is meant to try to verify whether the complaints have merit and gauge the seriousness of any potential problems.

The Fusion, a midsize sedan, is one of Ford's most popular models, with more than 70,000 sold in the first four months of 2010. This year, Ford has sold about 11,500 Mercury Milans, a car that is essentially the same as the Fusion.