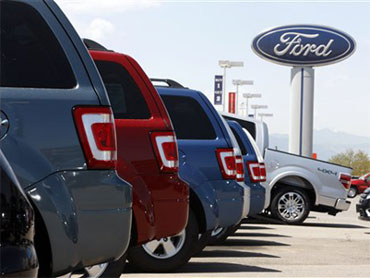 Ford earned its biggest profit in more than a decade in 2010 as robust vehicle sales and years of cost cuts paid off. But disappointing fourth-quarter results rattled investors Friday and sent the company's stock price lower.

Ford shares fell 12 percent to $16.63 in late morning trade after the company missed analysts' expectations. The reaction showed the difficulties Ford faces, even though it's remade itself over the last four years.

Ford's net income totaled $6.6 billion, or $1.66 per share last year, more than double the $2.7 billion, or 86 cents, from 2009. Before charges for debt reduction and the discontinuation of its Mercury brand, Ford would have earned $1.91 per share, short of the $2.05 analysts expected.

Ford's fourth-quarter profit also missed Wall Street's forecasts. Net income dropped 79 percent to $190 million, or 5 cents per share. Results included a big charge for lowering its debt. Without it, Ford would have earned 30 cents per share, still far below the 48 cents analysts anticipated.

Ford said it warned investors about the one-time charges but didn't keep them updated when it decided to pull back on incentive spending in Europe, which led to a drop in sales and profits there. The company said it also spent more marketing new products like the Ford Explorer in the fourth quarter than some analysts had anticipated.

For investors, the disappointing end to 2010 interrupts a string of successes for Ford. The company's car sales and stock price have surged, its reputation for quality has revived and it announced on Friday that U.S. hourly employees will get profit-sharing checks that average $5,000 this year. I

Four years ago, Ford had posted a string of huge losses and its future was in doubt. It got a $23.5 billion loan by mortgaging its factories and other assets, including its blue oval logo. Then it shed most of its brands, closed or sold a quarter of its plants and cut its global work force by more than a third. It also slashed labor and health-care costs, plowing the money back into the design of some well-received new products like the Ford Fusion sedan and Ford Edge crossover.

But challenges remain, as investors showed Friday. Ford must fight to keep its sales growing, continue to pay off its huge debt and rescue its flailing Lincoln brand. And it is setting high expectations.

Last year's results included $853 million in charges for reducing debt. Ford also reported a $339 million charge for the discontinuation of the Mercury brand. Ford announced last summer it would stop producing the brand by the end of the year.

Debt fell from $33.6 billion to $14.5 billion during the year. The lowers Ford's interest payments by a little more than $1 billion.

Ford's U.S. sales jumped 20 percent last year double the rate of the industry as an improving economy spurred demand for the company's F-Series pickups and other vehicles.

Ford Chief Financial Officer Lewis Booth predicted the company will have another strong year of new products, including the launch of the new Ford Focus in North America, Europe and Asia. The company did not cut back on vehicle development during the recession, he said.