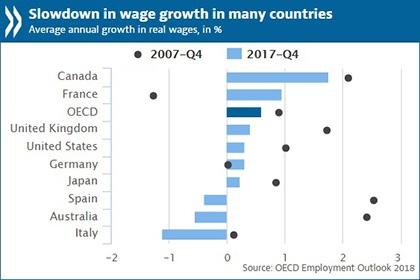 The American labor market by many metrics is doing remarkably well, with businesses continuing to hire robustly in June and unemployment at 4 percent. Still, a large number of U.S. workers aren't feeling the benefits of the nation's economic well being, and a recently released economic report sheds some light on why.

The United States has a higher level of income inequality and a larger share of low-income residents than almost any other advanced nation, according to an annual employment report from the Organization for Economic Cooperation and Development, an economic organization with 36 member countries.

American workers suffer from longer-lasting consequences when they lose a job, and the majority lack the type of labor protections that workers in other countries enjoy, the group said. About 12 percent of U.S. workers were covered by collective bargaining in 2016, with just Turkey, Lithuania and South Korea having lower figures, the study found.

But the U.S. isn't the only country with problems.

Gains in employment among developed nations is "not leading to fatter paychecks, (and) wage growth is still missing in action," Organization for Economic Cooperation and Development Secretary-General Ángel Gurría, told a webcast announcing the findings.

Among advanced nations, just Spain and Greece have more households making less than half the nation's median income, and their economies were battered by the euro-zone crisis.

The global group found that one in five U.S. workers lose or depart their jobs every year, and 23.3 percent of workers ages 15 to 64 had been in their job for less than a year in 2016, a larger share than all but a small number of countries reviewed.

The U.S. and Mexico are the only nations in the OECD's study that don't require any notice for individual firings, with the U.S. in the basement in terms of comparing employee protection even when mass layoffs are considered.

Recovering from a job loss is more difficult in the U.S., with fewer than half finding employment within a year. As a result, two in three families with a displaced worker end up living in poverty for a period of time, the researchers found.

Making matters worse, Americans who find work after losing a job usually don't recover their prior wages, with displaced workers still lagging their peers in annual income after four years. In countries including Finland and Denmark, workers bounce back from a job loss to reach their previous earnings.

Put another way, the researchers found the U.S. devotes less of its economic wealth to helping people without work or who are in danger of becoming unemployed.

The report "underlines the urgent need for countries to help workers, especially the low-skilled," the OECD's Gurría said in a statement.