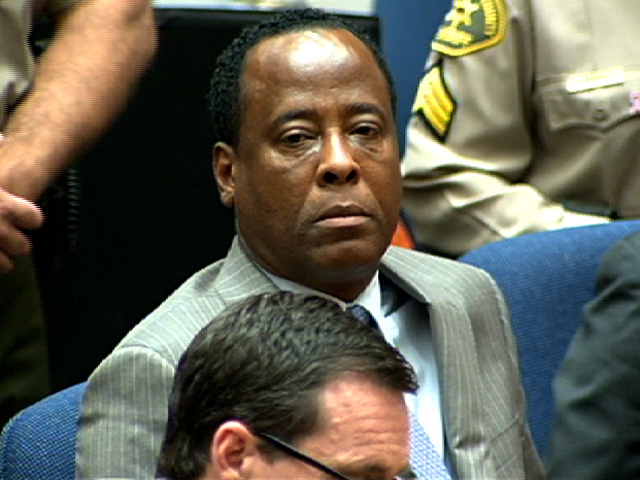 Dr. Conrad Murray is on suicide watch at the L.A. County Jail following his conviction Monday of involuntary manslaughter in Michael Jackson's death, according to a report in the Los Angeles Times.

But the decision was a cause for celebration for many Monday when the judgment was read.

CBS News correspondent Bill Whitaker reports Jackson's fans celebrated outside the courtroom, finally hearing the decision they had been waiting for for two-and-a-half years.

Jackson's sister, LaToya Jackson, who was heard crying out after the guilty verdict was read, said, "Michael was watching over us. He was watching was over us. (I'm) very happy."

But according to J. Randy Taraborrelli, Michael Jackson's friend, confidante and, ultimately, his biographer, the verdict has left a sense of emptiness.

He said on "The Early Show," "I understand that, for a lot of people this verdict is a reason for celebration. I mean, it's been a long time coming and, you know, it does feel that justice has finally been served. But, really, for me and for people who actually knew Michael Jackson and cared about him, there's a real sense of emptiness this morning because, after all, this verdict does not bring Michael Jackson back. And if anything, it underscores ... how needless (his death) was. For me, I don't really feel that this is a reason for celebration. I think today, perhaps, this is a time to reflect, reflect upon the life of Michael Jackson and a man, a brother, a son, a friend, who lost his life because of a doctor's extreme negligence."

Taraborrelli is the author of "Michael Jackson: The Magic, The Madness, The Whole Story, 1958-2009."

When asked about how the family is responding to the verdict, Taraborrelli, who has spoken to some of Michael Jackson's relatives, said, "Well, you know, I think that the consequences of this tragedy will have an effect on Michael's family for many, many years to come. And especially on his children. I mean, they lost a father, they lost the only parent that they ever knew. But, you know, the children are very strong. They were raised by Michael to be strong and resilient. And the family has gathered around the children now to support them through this. The kids were sheltered from a lot of this, but they're very social. You know, they've been on Facebook, they have Twitter accounts. They're out there living their lives. But, in fact, for the family and for the children, there really will never be closure. I mean, this is never going to be OK. There's satisfaction that a verdict has been reached and that justice is served, but Michael is gone and that's never going to be OK."

"Early Show" co-anchor Erica Hill said, "There was a lot of concern before this trial started that it wouldn't just be Dr. Conrad Murray on trial, but that Michael Jackson's life and lifestyle would also be on trial. Did that happen at all?"

Taraborrelli said, "We learned through this trial that Michael Jackson was a man who was in need of help. And he needed help as much as anybody needs help dealing with anxiety and stress and insomnia. And we learned that he really did not receive that help, that he put his faith and his trust in Conrad Murray and that he paid the price, paid the price dearly with his life. So I think that, you know, as a biographer, my job has always been to separate the man from the icon and in many ways, I think the trial did that."

Whitaker reported Murray showed no expression when the verdict was read, but appeared surprised when the judge ordered him handcuffed and immediately remanded him into custody to await his formal sentence in three weeks. Murray faces a possible four years behind bars.