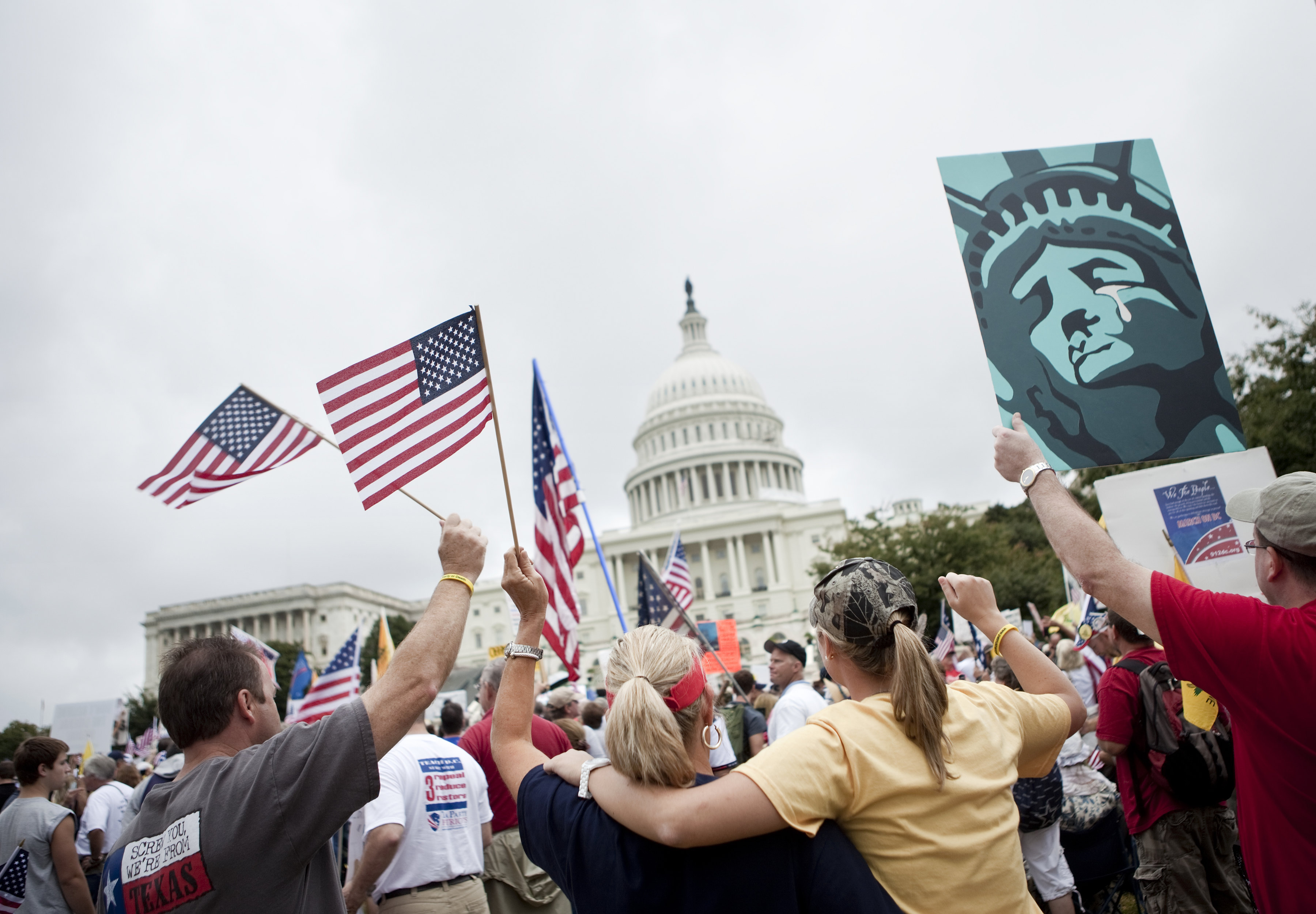 When tea party kingmaker and South Carolina Sen. Jim DeMint announced Thursday that he was leaving the Senate, it prompted an outpouring of support from his colleagues. DeMint, they said, stood for an uncompromising conservative vision that had too often been corrupted; he "helped provide a powerful voice for conservative ideals in a town where those principles are too often hidden beneath business as usual," in the words of Senate Republican Leader Mitch McConnell. Even Senate Democratic Leader Harry Reid said that while he strongly disagreed with DeMint, he liked him and believes that DeMint acts "out of a sense of real belief. It's not political posturing."

But for members of the GOP establishment like McConnell, DeMint was also something else: A significant roadblock in their efforts to achieve a Senate majority. To be sure, DeMint championed staunch conservative Republican senators who have managed to get elected, among them Utah's Mike Lee, Kentucky's Rand Paul, and Texas' Ted Cruz. He was also an early financial backer of Florida Sen. Marco Rubio, who is seen as one of the leading contenders for the 2016 GOP presidential nomination.

Yet DeMint also backed candidates who lost races that the GOP establishment justifiably believed were eminently winnable: Christine O'Donnell in Delaware, Ken Buck in Colorado, Richard Mourdock in Indiana, Sharron Angle in Nevada. (DeMint did not formally back Angle until after she won her primary.) DeMint's willingness to bet on relatively conservative candidates in relatively moderate states frustrated many in the Republican establishment, some of whom believe that they might now control the Senate had DeMint and his allies not stepped in. DeMint also complicated Republican efforts to move legislation on the Senate floor, chafing at arrangements and legislation that Republican leaders viewed as pragmatic steps necessary to achieve larger goals.

There wasn't much those leaders could do to slow him down, however: DeMint has been a powerful fundraiser, helping raise more than $25 million for the Senate Conservatives Fund - the political action committee he founded - over the last two election cycles, according to the Associated Press. Republicans knew that if they engaged in overt criticism of DeMint and his true believer approach, they risked (1) angering the tea party movement that helped drive the GOP resurgence after President Obama's election in 2008 and (2) inviting a well-financed primary challenger that would affix them with the dreaded tag of "RINO," or Republican In Name Only.

DeMint's decision to leave the Senate for the Heritage Foundation, a conservative think tank in line with his views, signals that in the wake of Mr. Obama's reelection, the uneasy tea party/GOP alliance has come to at least a partial end. DeMint appears to have concluded that he has done all he can in "the battle of ideas" from within his party; his move to Heritage signals that he believes he can be more effective in pushing the GOP in a conservative direction by applying pressure from the outside.

The Republican establishment, meanwhile, appears to be going in the opposite direction. House Speaker John Boehner removed four tea party-aligned conservative Republicans from key committees this week; Boehner maintained that the decision "had nothing to do with ideology," but the members themselves didn't see it that way. One of the ousted lawmakers, Rep. Tim Huelskamp of Kansas, told Heritage on Tuesday that he was part of a "purge" driven by his unwillingness to go along with the leadership, according to Slate. (Huelskamp and another "purged" member voted against the Paul Ryan budget because they felt it didn't balance the budget quickly enough; all four of the "purged" lawmakers voted against last year's debt ceiling deal.) "It confirms, in my mind, Americans' deepest suspicions about Washington," Huelskamp said. "It's petty, it's vindictive, and if you have any conservative principles, you will be punished for it."

And while Boehner is outwardly maintaining his opposition to Mr. Obama's demand that tax rates be allowed to increase on income over $250,000, congressional Republicans appear to be inching toward acquiescence - a violation of the conservative movement's anti-tax orthodoxy that many tea partiers find unconscionable. Stalwart conservative Rep. Tom Price of Georgia - who, not coincidentally, last month lost his battle to be chairman of the House Republican Conference - on Thursday published an op-ed making the argument against the "foolhardy" notion of raising rates. With polls showing Republicans on the losing end of the public opinion battle, he seems to be swimming against the tide.

As GOP rising star and Louisiana Gov. Bobby Jindal put it in a Thursday op-ed: "[A]ny reading of the headlines over the past week indicates that Republicans are fighting to protect the rich and cut benefits for seniors. It may be possible to have worse political positioning than that, but I'm not sure how." Already, Boehner has offered the president $800 billion in additional revenues as part of a deal to avert the so-called "fiscal cliff" - an offer that incited the ire of DeMint and outside conservative groups.

The anger toward Boehner - the most powerful Republican in Washington - from tea party voices has been steadily growing, with the tea party-aligned FreedomWorks hammering him and American Majority Action calling for him to be "deposed" from the leadership. And tensions have also broken out among the commentariat: After conservative blogger Jennifer Rubin of the Washington Post wrote that Heritage's embrace of DeMint suggested the organization was becoming "a political instrument in service of extremism, not a well-respected think tank and source of scholarship," conservative radio host Mark Levin promptly told her to "go to hell."

Speaking of FreedomWorks: It was revealed this week that that group's biggest connection to the GOP establishment - former House Majority Leader Dick Armey - was departing as chairmanamid a clash with the group's president over how the group's resources were being used. (Armey reportedly received a healthy $8 million buyout along the way.) Armey told Fox Business Network that his departure "is unrelated to what's going on with John Boehner and largely unrelated to the Tea Party movement," but it was hard to ignore the symbolism of someone with Armey's GOP bona fides leaving a Tea Party-aligned group as it takes aim at what it sees as a weak-kneed Republican leadership.

All this does not mean that there has been a complete divorce between the tea party and the GOP establishment. While some tea party-aligned lawmakers, including Florida Rep. Allen West, lost their seats in November, many were reelected, and many continue to push their agenda in Congress.

But there does appear to be a clear move by the GOP leadership to assert control over their party, and a corresponding move by tea partiers like DeMint and Huelskamp to adopt a more oppositional, outsider posture. While anti-tax activist Grover Norquist insisted Sunday that "tea party two is going to dwarf tea party one if Obama pushes us off the cliff," Republicans seem to be shifting away from Norquistand the tea party-style absolutism that he stands for.

In honoring DeMint on the Senate floor Thursday, South Carolina's other Republican senator, Lindsey Graham, told his colleagues that "Jim made the Republican Party, quite frankly, look inward and do some self-evaluation." He then went on to offer an implicit acknowledgement that some of his colleagues might be happy to see DeMint go.

"Conservatism is an asset, not a liability, as we try to govern this country in the 21st century," said Graham.