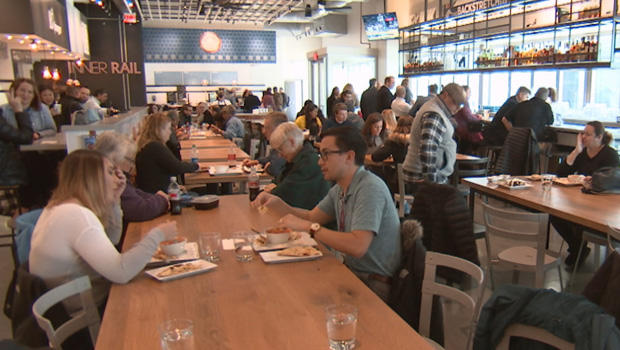 Once upon a time, Americans actually left their houses to shop. But with the rise of online shopping, thousands of brick-and-mortar retail stores have closed – and some developers are hoping to fill that empty space by filling eager bellies.

"Even if you've been here 10 times, you walk in and you're discovering something different," said Phil Colicchio, a consultant with the real estate firm Cushman & Wakefield, as he led correspondent Faith Salie through a food hall.

"How is a food hall different than a food court that we'd find in a mall or an airport?" Salie asked.

"The food court was never really designed to give you an experience of any kind," Colicchio replied. "It wasn't designed to make you say, 'Wow.' In a food hall, all your senses should get activated. Lots of variety, lots of artisanality."

"What is artisanality?" asked Salie. "Does that mean 'fancy'?"

"No," Colicchio said. "You know what? It means 'not corporate.'"

They may not be corporate, but food halls are big business. In 2015 there were just 70 food halls in the U.S.; by the end of next year there will be more than 400.

Detroit has food hall built of old shipping containers. In Anaheim there's one inside a former citrus packing plant. In Charlotte, N.C., they've converted an old textile mill. Chicago already has 10 food halls, with more on the way.

When Nebraska real estate developer Jay Noddle wanted to create a community space on the site of a former race track, he turned to New York chef Akhtar Nawab to help curate the space. Omaha's Inner Rail Food Hall opened last month – nine vendors with different cuisines, surrounding a central bar. "For us this wasn't a space filler, this was intended to be a traffic generator," Noddle said.

Nawab said, "The destination here is food; the destination's not to go shopping. People are coming here specifically because they want food, they want an experience."

Nawab scoured Omaha looking for the best food the city had to offer, which is how he found 24-year old Chloe Tran. She was anxious to expand, but didn't think she had the money to open a second location of her Vietnamese sandwich shop, the Bánh Mì Shop.

Tran said, "A brick-and-mortar shop would cost, like, at least five to ten times more just to get started."

Vietnam isn't the only far-off land whose cuisine is represented at Inner Rail. In fact, culinary diversity is part of what makes each food hall unique. At Kathmandu Momo Station, Sagar Gurung serves up Himalayan dumplings called "momos," each made by hand.

Gurung was born in Nepal but grew up in Nebraska. Back then, his neighbors used to complain constantly about the smell of his family's cooking: "Fast-forward to 20-plus years now, I see people lining up to pay for the same foods," he said.

Dumplings from the Himalayas in Omaha? "Isn't that great?" said Noddle. "Now there's a place where you can interact with people that you've never met before and try cuisines from around the world."

Even if all these dishes are Instagram-worthy, Coliccio says a good food hall should give you something technology can't: a sense of community.

"Since the cave people, we ate together," he said. "And that's probably not gonna change even in an e-commerce-dominated world. We're gonna eat together."