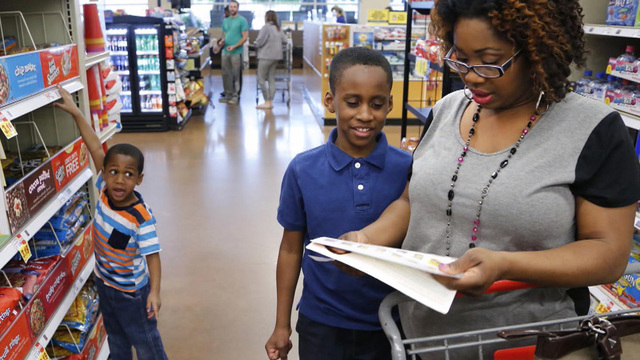 The Food and Drug Administration (FDA) is asking for your thoughts on how to define the term "natural" on food labels. The government opened a 90-day comment period, after increasing demands from people for more transparency about what we're eating.

Many hard-to-pronounce ingredients on nutrition labels are "generally recognized as safe," according to the FDA, but experts warn there is still a long way to go in regulating exactly what goes into our food, reports CBS News correspondent Anna Werner.

Would you eat your favorite cereal if you knew it contained butylated hydroxytoluene, a product also used in jet fuel?

Reading food labels has become a habit for Heather Tamayasu, a mom of a 2-year-old boy with twin girls on the way. She thinks twice about feeding her family anything with artificial ingredients.

"I want to know, truthfully, what's in the product, and not just using key words that sound good but are hiding something," Tamayasu said.

Now some major food companies say they're taking artificial coloring and flavors out of their products.

Kraft has pledged to remove that bright yellow color -- really a synthetic dye -- from its classic mac and cheese by next year.

General Mills, maker of Trix and other cereals, said natural alternatives like beet juice and tumeric will soon provide bright colors instead of artificial dyes.

The companies said it's about listening to their customers. General Mills told CBS News: "We're really doing this because we've heard from families who say this will make the products better."

But it may also be about profits. A report this year shows 80 percent of consumers are willing to pay more money for natural products.

Heather White directs the Environmental Working Group, a non-profit that monitors and rates over 80,000 food products based on the safety of their ingredients.

"The reason these companies are making these steps is because they listen when we start voting with our pocket books," White said.

"The fact that the food was made in the factory by a big company was a thing that guaranteed in consumer's minds that it was safe, that it was modern, that is was scientific," Berenstein said.

Food processing in mass production drove the need for additives even more. Every item coming off the assembly line had to taste the same.

In the '40s and '50s, new technology like freezers and microwaves gave rise to novelties like TV dinners packed with chemical preservatives, but widely popular.

But White said regulations haven't kept pace with innovation, and these days, even with the companies new changes, there are too many unknowns about what exactly we're eating.

"There's 10,000 different chemicals that we are exposed to in food and there at least 3,000 that we don't know anything about... So fundamentally we really need to overhaul our system when we are thinking about chemicals in food," White said.

White cited a study done by the Pew Charitable Trust and the Natural Resources Defense Council. She went on to say that labels like "natural" can be vague and misleading.

The FDA said it seeks to determine how to define "natural" and how to appropriately use it to categorize food.

Correction: This story has been updated to reflect that the study was done by the Pew Charitable Trust, not the Pew Research Center.