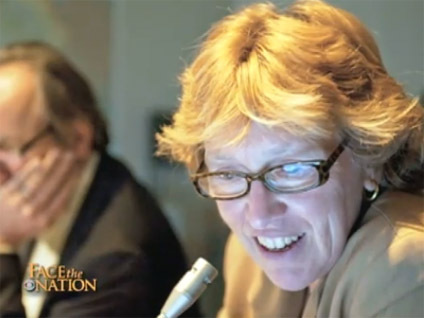 For the last twenty years you've been seeing me sitting at this desk on Sunday. I'm the part of "Face the Nation" you see.

What you don't see is the other half of our broadcast - back there in the control room. And back there running things for 20 years of Sundays has been Carin Pratt, the executive producer of "Face the Nation."

Carin was just a kid when I came to "Face the Nation." At my urging, our bosses put her in charge - the best idea I ever had - and she's been there ever since, through wars and political campaigns.

When guests cancelled at the last minute or when satellites went down or when we had to junk an entire show just hours before the broadcast - most recent cases being the uprising in Egypt and the earthquake in Japan - through four administrations, Carin got us on, and off, the air.

It's not a job for the timid or the nervous. It's what we do, and we love it.

But we couldn't have done the job we did without Carin.

Today marks her last broadcast. She is leaving Washington to join her husband who has taken a professorship at Vermont Law School.

I asked her to come out here with me today, but she was having none of that!

"I've always been the person in the control room," she told me in no uncertain terms. "That's where I want to be for this one."

That's Carin. And because she is there, it is easier for me out here.

Thank you. Carin. I'm really going to miss you.