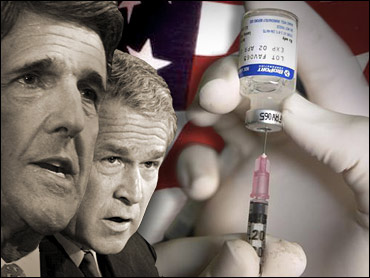 Two weeks before Election Day, President Bush and Democratic challenger Sen. John Kerry were concentrating their focus on the largest states considered still up for grabs in this closely contested campaign.

Mr. Bush was in Florida, the biggest remaining battleground of all, where he sought to allay older voters' fears about shortages of flu vaccine that he says were caused by a "major manufacturing defect" but Democrats link to incompetence.

"I know there are some here who are worried about the flu season," Mr. Bush told supporters in a stadium at a baseball training camp in St. Petersburg. "I want to assure them that our government is doing everything possible to help older Americans and children get their shots despite the major manufacturing defect that caused this problem."

Democrat Kerry has criticized the Bush administration for failing to heed warnings about the availability of vaccines.

Rebutting his opponent's criticism, Mr. Bush said the government has millions of vaccine doses on hand for the most vulnerable Americans. "Millions more will be shipped in the coming weeks," he said. "We're stockpiling more than 4 million doses of flu vaccine for children."

Kerry was also campaigning in Florida on Tuesday, as well as the two other top electoral vote statess that analysts say are still undecided – Pennsylvania and Ohio.

Those three states account for 68 electoral votes, more than a quarter of the 270 needed to be elected.

Kerry's campaign said his focus Tuesday will be how the president turned a huge surplus into a deficit and attack plans to privatize Social Security. Kerry will offer a plan to cut the deficit in half and protect Social Security.

National polls showed the race remains tight. The two rivals are tied statistically in some and Mr. Bush holds a slender advantage in others. Yet several recent surveys show the president beneath 50 percent support, often a late-campaign sign of difficulty for any incumbent.

In a new /New York Times survey, Mr. Bush leads Kerry 47-45 among likely voters, with Ralph Nader taking 2 percent. The lead is within the poll's margin of error.

But a Quinnipiac University poll of New Jersey, a state Kerry is counting on, shows him with a slim 49-45 percent lead over the president, who visited the Garden State on Monday.

Aides to both candidates claimed to possess private polls showing their man ahead in the dozen swing states that will determine the outcome of the election.

Florida was prominent among them. There, the first difficulties surfaced soon after early voting opened in the state whose recount reached the Supreme Court four years ago before propelling Mr. Bush to the White House.

"This is not a good start," said Democratic State Rep. Shelley Vana, adding that the paper ballot she received in a Palm Beach County, Florida, polling place was missing a page.

There were a few computer-related problems elsewhere across the state, but no early reports of difficulties with ATM-like touch-screen voting machines introduced since the troubled 2000 election. "It tells you exactly what to do. It's idiot-proof," said Robin Punches, voting in Palm Beach County.

On his 14th trip to Florida this year, President Bush tried to calm military families in the area with a pledge not to reinstate the draft.

With two of his brothers at his side – Marvin Bush and Florida Gov. Jeb Bush – the president and his campaign bus caravan rolled through west-central Florida along the Interstate 4 corridor with stops in St. Petersburg and New Port Richey, which are both in counties Mr. Bush lost in 2000.

The I-4 corridor, a key battleground area, stretches across Florida's midsection from Tampa Bay on the Gulf of Mexico through Orlando to the Atlantic Coast city of Daytona Beach.

Before flying back to Washington, the president was heading to friendlier turf farther north where he was to speak in a retiree area of Sumter County, which he won in 2000 by about 2,500 votes.