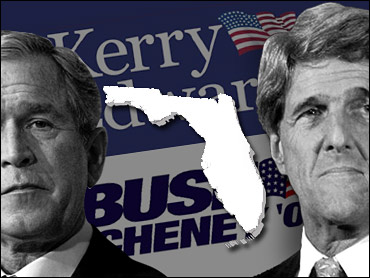 With memories of 2000 and the state's bitter fight over ballots still fresh, Floridians began casting votes Monday and within an hour problems cropped up.

In Palm Beach County, the center of the madness during the recount four years ago, a Democratic state legislator said she wasn't given a complete absentee ballot when she asked to opt for paper instead of the electronic touch-screen machines. And in Orange County, the touch-screen system briefly crashed, paralyzing voting in Orlando and its immediate suburbs.

A steady flow had turned out Monday morning at more than a dozen sites in Palm Beach County. Patrick Flanagan, who went to the county's election headquarters to cast his ballot, said he voted early because he wanted to avoid the long lines expected on Election Day. He said he's voted on the touch-screen machines once before, and both times have gone "very smoothly."

"I'm a computer-phobe, and it seemed easy enough to me," said Flanagan, who added that he had no concerns about his vote being counted.

Also coming out of the polls on Monday, Steve Perez, 44, said he came early to cast a "protest vote" for Ralph Nader.

"What's important is that you vote. I didn't want to get in all the hoopla with all the turnout in Election Day," said Perez, a substitute teacher.

State Rep. Shelley Vana was not so happy. She said the paper absentee ballot she was given at a Palm Beach County site was missing one of its two pages, including the proposed amendments to the state constitution. She said election workers were indifferent when she pointed out the oversight.

"There was absolutely no concern on the part of the folks at the Supervisor of Elections Office that this page was missing. This is not a good start. If there are incomplete ballots out there, I can't imagine I would be the only one getting it," she said.

County elections supervisor Theresa LePore did not immediately return a call for comment.

Early voting also gets under way Monday in Texas, Colorado and Arkansas. Other key states this year have already begun in-person voting, including Wisconsin, Iowa, Nevada, Ohio, New Mexico and Pennsylvania. Balloting by mail is under way in Oregon, the only state in the nation that has done away with polling booths altogether.

Early voting and touch-screen equipment were introduced in Florida after the 2000 election, in which this crucial state decided the result by only 537 votes and introduced topics such as butterfly ballots and hanging chads to the national debate. The early voting continues at a limited number of sites in each county until Election Day, when regular polling places will be open.

In Miami-Dade County, about 150 people gathered Monday morning for a rally led by the Rev. Al Sharpton and former U.S. Attorney General Janet Reno. Some people were carrying homemade signs that said "Early Voting Counts" and "Every Vote Matters."

Both President Bush and Sen. John Kerry arranged campaign swings through the Sunshine State over the weekend.

"There are probably a lot of people in Florida who are ready to cast their ballot," said Mindy Tucker Fletcher, senior adviser for the Bush campaign in Florida.

Some groups are urging voters to ask for paper absentee ballots, as Vana did, because of concerns over the state's new touch-screen voting machines and any potential recounts. Voters Monday morning could choose either method.

Even as voters turned out, lawyers were going to court in Fort Lauderdale to argue a lawsuit over the lack of paper backup on the electronic machines.

Other groups are touting early voting as a chance for busy voters to avoid waiting in line Nov. 2. Some have criticized the concept, saying it increases opportunities for fraud without significantly boosting participation. Still, most states offer the option.

"It's going to be changing the way candidates campaign because they have to get their message out to people two to three weeks earlier than in the past," LePore said earlier.

Election officials say that although the early-voting creates more work, they're pushing for voters to make their voices heard any way they can.

"As long as people vote, we're happy," said LePore, who lost her re-election bid in August over the butterfly ballot but remains in office until January. "But if something really bad happens about a candidate two days before an election, you can't change your vote."