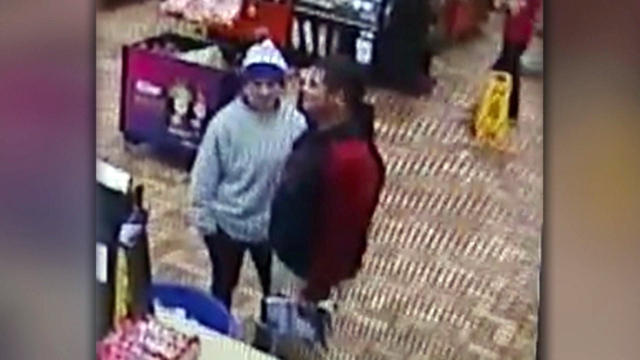 New information shows a Florida runaway is on the road with a now former soccer coach at her high school. Investigators say surveillance cameras found 17-year-old Caitlyn Frisina with 27-year-old Rian Rodriguez at three new locations on the East Coast.

The sheriff's office says Frisina and Rodriguez could be anywhere by now. Surveillance videos are giving investigators some clues, but much remains unknown about the whereabouts of the pair who have been on the run for five days.

Police say the teen snuck out of her bedroom window and ran off with Rodriguez sometime between Saturday night and Sunday morning.

"If they had a prior relationship it was a very, very tight secret. Caitlyn actually has a boyfriend. The boyfriend spent thanksgiving with her," said Columbia County Sheriff's Office spokesman Sgt. Murray Smith.

Surveillance footage indicates the two are in Rodriguez's red 2001 Mercury Sable making their way up Interstate 95. They were first spotted in St. Marys, Georgia, when Frisina used her ATM card to take out $200.

Cameras caught them again in South Carolina at a gas station in Hardeeville and then inside a convenience store in Saint George where the two are seen standing close together.

"He was a fine young man, he was a mentor to the soccer team, there was no indicators that he would do something like this," Sgt. Smith said.

Police say that Rodriguez does not have a criminal past and there was no indication of a romantic relationship between the two.

Columbia County Sheriff's Office spokesman Sgt. Murray Smith. said it was a "complete shock" to her family and friends.

"That's what is so devastating about this," he said.

While they are solely focused on getting Caitlyn home at the moment, Smith said there is a criminal component to the investigation.

Scarlet Frisina, Caitlyn's mother, is desperate to hear from her daughter.

"We need to know that you're okay. Please call us, call somebody, let somebody know," Frisina pleaded.

Police say that Rodriguez can be charged with interfering in child custody, which is a felony in Florida. He could face further charges depending on what the investigation yields.