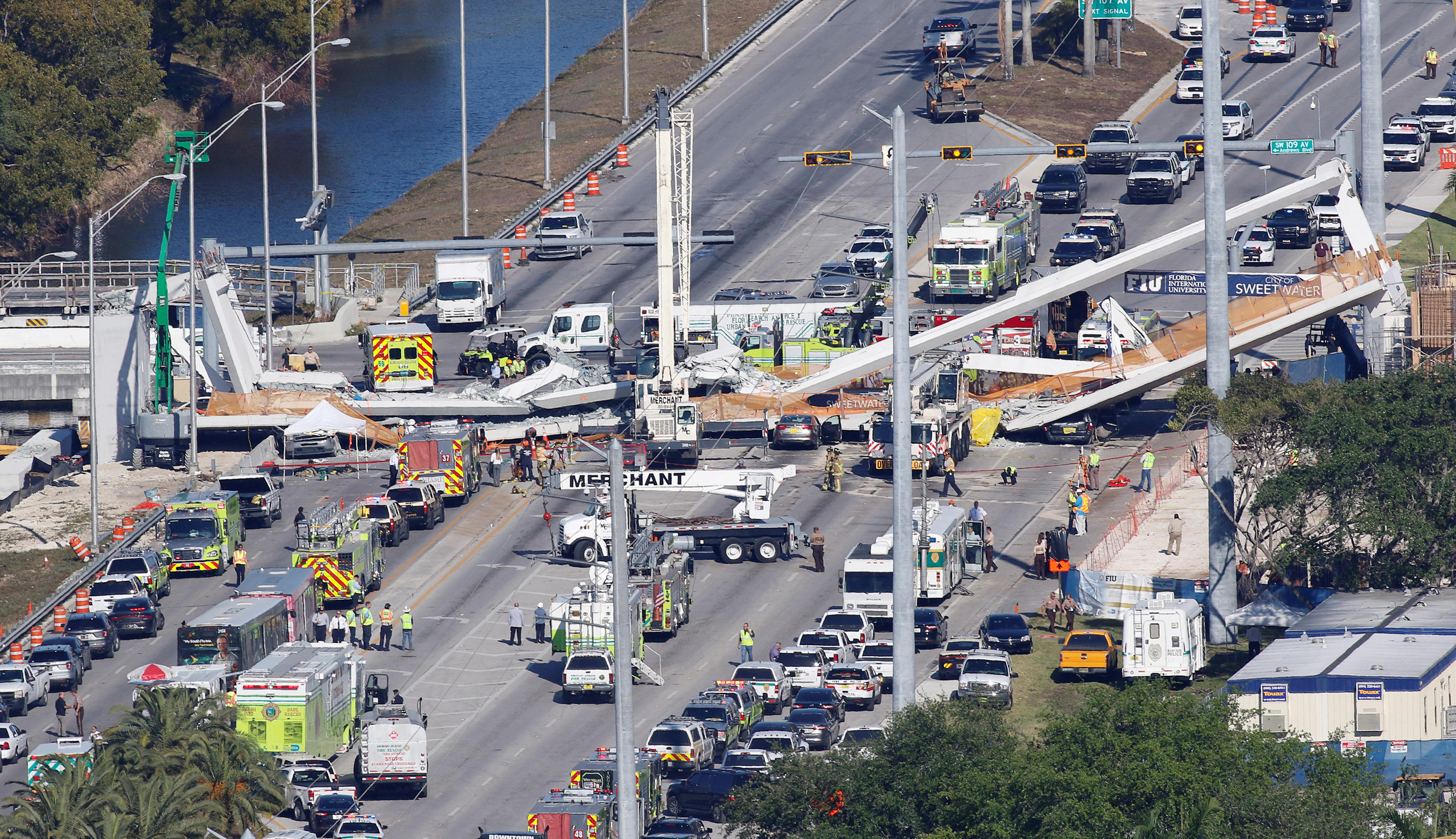 SWEETWATER, Fla. -- A newly installed pedestrian bridge connecting the campus of Florida International University (FIU) with the city of Sweetwater west of Miami collapsed Thursday, crushing several cars on the roadway below. Miami-Dade Fire Chief Dave Downey said late Thursday that there are six confirmed fatalities and that the search and rescue phase is not complete and will continue around the clock. Florida Highway Patrol Lt. Alejandro Camacho told CBS News that the bridge was still under construction and not open to pedestrians.

Florida Gov. Rick Scott addressed the media Thursday evening saying that if anyone did anything wrong they will be held responsible. He pointed out that the bridge project was not part of the Florida Department of Transportation, but that of FIU and funded with federal money.

"We're going to do everything we can for the victims," Scott said. "There will clearly be an investigation into why this happened and we will hold anyone accountable if anything was done wrong, but the most important thing we can do right now is pray for the individuals who ended up in the hospital and the family members who lost loved ones."

Sen. Marco Rubio, R-Florida, also was part of the press conference and expressed his condolences. He has been a FIU adjunct professor for the last 10 years.

"Ironically this [bridge] was designed for safety ... it was going to be a signature project and one of its kind in terms of its engineering design," he said. "The public deserves to know and the families deserve to know and the people who lost their lives deserve to know what went wrong. These people doing the engineering studies will tell us what went wrong. It will prevent something like this from happening again because we learn from those things."

"We're utilizing all the tools and equipment," Downey said. "We're going to continue to search this pile until we're sure there are no other victims." Downey said that there were at least 100 first responders at the onset of the incident Thursday afternoon. He also confirmed that nine people were recovered from the rubble and that there have been four fatalities so far.

Authorities have yet to identify the victims.

FIU president Mark Rosenberg addressed the media Thursday: "On behalf of the entire FIU community, I want to express our condolences to all those family members, sons and daughters, loved ones involved. This bridge was about collaboration, about hope, about opportunity and about determination. This bridge was about strength and opportunity about being good neighbors with the city of Sweetwater. It was about goodness, not sadness. Now we're feeling immense sadness ... and our hearts go out to all those affected. We're committed to assist in all efforts necessary and our hope this sadness can galvanize the entire community to stay the course -- the course of goodness and hope of opportunity." He also thanked the first responders.

Mayor Orlando Lopez of Sweetwater, Florida, said he was notified of the bridge collapse by a local business owner who called him about the devastating news.

"My heart stopped. I can hear the crackle in his voice as he explained to me that the bridge collapsed and there are vehicles trapped under it. I couldn't believe that this very bridge that was being erected to provide safe transfer between students of FIU to the city of Sweetwater actually collapsed. It is a very tragic day."

Lopez said that three of the officers at the Thursday evening press conference arrived at the scene within 30 seconds and did CPR and helped some victims stay alive and brought back to life to allow fire and rescue to arrive on scene.

Officials urged motorists to steer clear of the area as the investigation continues.

The National Transportation Safety Board (NTSB) also held a Thursday evening press conference to say they are launching an investigation and sending specialists from the office of transportation disaster assistance to help families affected by the incident.

NTSB also responded to a question about the bridge saying, "If we find that there are deficiencies with that type of bridge or construction, we have the ability to issue urgent recommendations."

They pointed out that there's much to investigate still and that NTSB "will be there tonight talking to people and have our team on the ground first thing tomorrow."

White House press secretary Sarah Sanders said President Trump was aware of the situation and that dfederal resources would be provided.

Mr. Trump praised the first responders for their courage:

In a news conference earlier Thursday, officials said there were eight vehicles trapped under rubble at the scene, and several people were transported to various hospitals. Aerial footage from CBS Miami showed the vehicles stuck underneath the 174-foot, 950-ton bridge.

One of the witnesses of the bridge collapse spoke with CBSN earlier Thursday to describe the scene.

"Me and my boyfriend had just driven under the bridge," Isabella Carrasco said. "We actually commented on how new it was ... We had heard a loud bang. At first, we thought we had hit something, and when we looked around, we realized the bridge had collapsed on multiple cars. I didn't see any pedestrians walking on the bridge. When we looked around we saw that it was much, much worse."

"So many people go through this particular intersection every day, so it's very terrifying," Carrasco added.

Carrasco told CBSN she saw one construction worker who had sustained injuries. She said authorities pulled him to the side of the road and later transported him to a hospital by ambulance. She also witnessed paramedics performing CPR on another person at the scene.

Witness Damany Reed told CBSN the bridge was constructed "for the safety of the students" in order for them to cross 8th Street "comfortably."

"I heard a big 'kaboom,'" Reed said. "It sounded continuous. We thought something had fallen, but it was the bridge that collapsed. It was just surreal at that moment and pretty scary."

FIU students are currently on spring break, reducing the number of pedestrians in the area.

In a statement, FIU said it was "shocked and saddened about the tragic events" at the bridge. The university says it is focused on rescue efforts and is "working closely" with first responders.

"Right now, the most important thing is to try and save these people who are hopefully still alive," Rep. Mario Diaz-Balart told CBS Miami shortly after the collapse. "Our thoughts and prayers are with them and the first responders who constantly risk their lives."

Munilla Construction Management (MCM) -- the company that was hired to build the bridge -- tweeted a statement in response to the collapse that reads in part: "Our family's thoughts and prayers go out to everyone affected by this terrible tragedy."

"Our deepest sympathies are with those affected by this accident," FIGG Bridge Engineers, the company hired to design the bridge, wrote in a statement. "We will fully cooperate with every appropriate authority in reviewing what happened and why. In our 40-year history, nothing like this has ever happened before. Our entire team mourns the loss of life and injuries associated with this devastating tragedy, and our prayers go out to all involved."

Two of the firms that built the bridge have been accused of unsafe practices, CBS News' Jim Axelrod reports.

Ten days ago, MCM was sued in South Florida by a TSA employee who was hurt at the Fort Lauderdale airport. The employee's lawyer alleges that a makeshift bridge MCM built for workers to use while the company does construction at the airport broke under his weight.

As for FIGG, a 90-ton portion of a bridge the company was assembling in Virginia in June 2012 fell apart while under construction. The Virginian Pilot reports four workers were hurt and that state regulators fined FIGG $28,000 for safety violations saying it was "pure luck no one was killed."

During a news conference Thursday afternoon, Maurice Kemp, deputy mayor of Miami-Dade County, said more than 100 firefighters were working to find victims in the rubble.

"All of our thoughts and prayers go to the victims of this tragedy that has occurred here today ... We thank all of the agencies that are out here supporting these efforts," added Juan Perez, director of the Miami-Dade Police Department.

Perez said the department's homicide division will take over the investigation. A reunification center has been setup at FIU. Perez said members of the public can call (305) 348-3481 for more information.

The bridge was constructed using an innovative approach called accelerated bridge construction (ABC), meant to reduce potential risks to workers, commuters and pedestrians and prevent traffic tie-ups in the area. It was moved into place Saturday.

Construction, which cost $14.2 million, was expected to finish in early 2019. The 32-foot-wide bridge was supposed to be 289 feet long and 109 feet tall once completed. The span was the first in the world to be constructed entirely of self-cleaning concrete, which helps to reduce maintenance costs, according to a press release from the university.

Monique O. Madan of the Miami Herald captured dramatic video from the ground showing the aftermath of the deadly collapse: