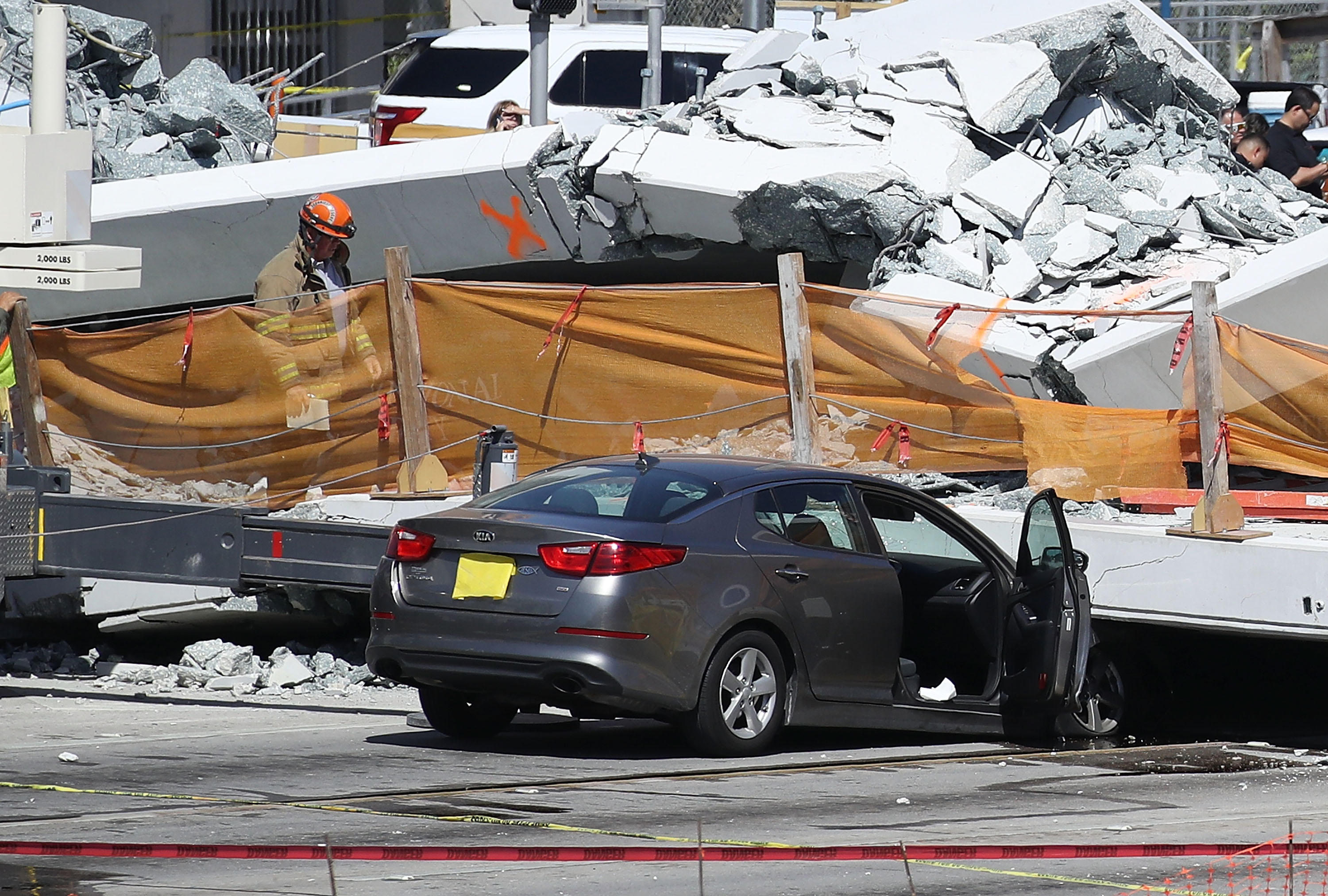 In the wake of the deadly accident, questions are being raised about the type of bridge that was being built, which was considered "first of its kind."

A press release from FIU lays out details of the bridge's construction: "The 174-foot, 950-ton section of the bridge was built adjacent to Southwest Eight Street using Accelerated Bridge Construction (ABC) methods, which are being advanced at FIU's Accelerated Bridge Construction University Transportation Center. ... This method of construction reduces potential risks to workers, commuters and pedestrians and minimizes traffic interruptions. The main span of the FIU-Sweetwater UniversityCity Bridge was installed in a few hours with limited disruption to traffic over this weekend."

It continued: "Construction of the bridge began in the spring of 2017 and is expected to be completed in early 2019. When it is finished, the bridge will be 289 feet long and 109 feet tall. The 32-foot-wide bridge will also serve as study and gathering space."

The $14.2 million bridge connecting the university with the city of Sweetwater was installed Saturday in six hours over the eight-lane highway, according to a press release by FIU.

CBS News' Jim Axelrod reports that two firms involved in the construction have been accused of safety violations in the past. Munilla Construction Management (MCM) -- a federal military contractor for the U.S. Army and Navy -- partnered with the FIGG Bridge Group to complete the bridge. FIGG has contracts with the Kennedy Space Center and NASA.

The bridge was erected to provide a safe route for students and visitors coming to and from the campus. The Reuters news agency reports that a 18-year-old female FIU student from San Diego was killed while trying to cross the busy street there last August.

A post about the bridge on the FIU Twitter account touts that it was the first in the world to be made entirely with "self-cleaning concrete."

Munilla Construction Management (MCM) wrote on Twitter that the bridge "experienced a catastrophic collapse causing injuries and loss of life." The company promised to cooperate fully with the investigation.

The illustration included in the tweet shows the bridge design included a central beam with suspension cables extending upwards from the walkway, but those elements of the bridge did not appear to be in place yet and were not seen in video footage from the scene Thursday. It was unclear what the builders were using as temporary supports.

Robert Bea, a professor of engineering and construction management at the University of California, Berkeley, told The Associated Press it was too early to know exactly what happened, but the decision to use what the bridge builders called an "innovative installation" was risky, especially because the bridge spanned a heavily traveled thoroughfare.

"Innovations take a design firm into an area where they don't have applicable experience, and then we have another unexpected failure on our hands," Bea said after reviewing the bridge's design and photos of the collapse.

FIU provided a timelapse video in a press release showing the bridge's construction and the process of moving it into place over the weekend:

As the news broke about the accident, CBS News learned that FIU and the structural testing service for the bridge both deleted tweets celebrating the construction of the doomed structure.

A screengrab obtained by CBS News shows the university posted on March 13: "FIU is about building bridges and student safety. This project accomplished our mission beautifully" -- FIU President Mark B. Rosenberg. The tweet has since been deleted.

The link redirects to a March 10 press release hosted on the FIU website titled, "First-of-its-kind pedestrian bridge 'swings' into place," which calls the bridge a "construction marvel" in a photo caption.

Another tweet that has since been deleted comes from BDI, which provides structural testing services and equipment. The company wrote March 12 that it was "thrilled to have performed structural monitoring" on the FIU project, and added "congratulations" to Barnhart Crane and Rigging (BCR) "on a job well done."

BDI hasn't responded to a request for comment yet.

Barnhart Crane and Rigging said in a statement that it was contracted to move the bridge into place and was not involved its design or construction. "Our scope of work was completed without incident and according to all technical requirements. Barnhart crews and equipment were not on site at the time of the incident," the company said, pledging to fully cooperate with the investigation.

It was also reported earlier Thursday that MCM, the construction firm, took its website down. It said on Twitter that it was "a family business and we are all devastated and doing everything we can to assist. We will conduct a full investigation to determine exactly what went wrong and will cooperate with investigators on scene in every way."

"Our deepest sympathies are with those affected by this accident," FIGG Bridge Engineers, the company hired to design the bridge, wrote in a statement. "We will fully cooperate with every appropriate authority in reviewing what happened and why. In our 40-year history, nothing like this has ever happened before. Our entire team mourns the loss of life and injuries associated with this devastating tragedy, and our prayers go out to all involved."

Two workers were replacing something on the side of the bridge when it collapsed, according to CBS Miami.

The National Transportation Safety Board sent investigators to the scene and Gov. Rick Scott addressed the media late Thursday.

"We have a national tragedy on our hands," Sweetwater Mayor Orlando Lopez said.

Florida Sen. Bill Nelson has called for the Secretary of Transportation Elaine L. Chao to start an immediate investigation.