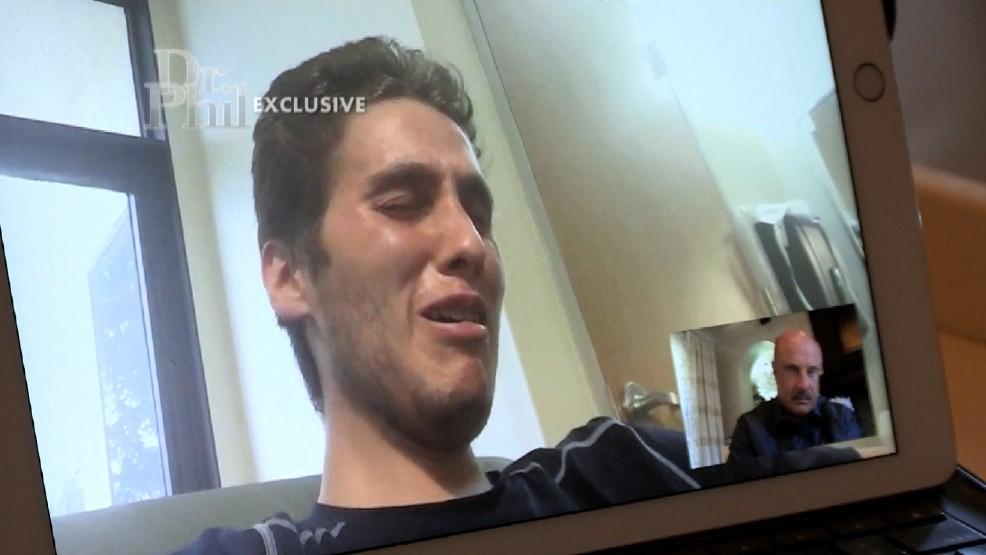 STUART, Fla. -- A Florida college student accused of randomly killing a couple in their garage and chewing on the dead man’s face told television psychologist Phil McGraw he was fleeing a demon-like figure named Daniel and only had a vague recollection of the slayings.

In a 22-minute interview released Tuesday by prosecutors, Austin Harrouff said he lost his wits as he walked back to his father’s home after storming out of a restaurant where they had an argument.

McGraw asked about “the devil talking to you,” and Harrouff went on to describe a “dark figure” he called Daniel. He said he couldn’t see the demon-like figure clearly, but said he could hear his voice and began to ran to find help.

“I got scared out of my mind,” Harrouff told McGraw, who interviewed him via computer webcam when the former high school wrestler and football player was still hospitalized last fall.

Harrouff, 20, was arrested upon release from the hospital for the Aug. 15, 2016, deaths of John Stevens, a 59-year-old landscaper, and his wife, Michelle Mishcon, 53. Both had been beaten and stabbed. He could face the death penalty if convicted of murder.

The interview, which is now evidence in the case, was scheduled to air on McGraw’s “Dr. Phil” show Oct. 28 but was pulled at the last minute without explanation. Prosecutors released it without comment after NBC affiliate WPTV hired lawyers to seek its release under the state’s public information law.

The interview is now set to be aired on “Dr. Phil” this Thursday.

Harrouff’s defense team tried unsuccessfully to block the release of the video, which they called “just one of many pieces of evidence demonstrating the deterioration of Austin’s mental health,” reports CBS affiliate WPEC.

The video “shows Austin when he was in a vulnerable state, recovering from acute medical and psychological trauma in the sanctity of his hospital room,” attorney Nellie King told the station.

King said the “circumstances of how Harrouff came to be videotaped in the hospital, while under guard by Martin County sheriff’s deputies, and without the knowledge of lawyers representing him, is still under investigation.”

Harrouff, a bodybuilder who majored in exercise science at Florida State University, said he stripped off most of his clothes as he tried to run away from “Daniel.” McGraw asked what he was thinking.

“I just need to find someone to help me, to figure out where I am,” said Harrouff, speaking in a steady, even voice as his father, dentist Wade Harrouff, stood just off camera. “I don’t even remember what I said to myself. I just remember being afraid, scared.”

Harrouff said he doesn’t remember how he came face-to-face with Mishcon in the couple’s garage. He said she screamed, and “then it’s a blur.”

“I think I showed up and she was shocked that I was, I guess almost naked,” Harrouff said. “I mean I understand that, but I didn’t know I was not clothed properly.”

“If I knew, I would tell you,” Harrouff said.

When McGraw asked him whether he was mentally ill, Harrouff replied, “I guess so.”

Harrouff said he drank something he found in the garage after the attack. He refused to say what it was, but it severely burned his esophagus. He denied ever using steroids or hallucinogenic drugs such as flakka or bath salts. None showed up in his blood tests.

When sheriff’s deputies arrived, they found Harrouff on top of Stevens, chewing his face. It took numerous deputies, jolts from an electric stun gun and bites from a police dog to pull him off. They said they didn’t shoot Harrouff because they feared hitting Stevens.

Harrouff said he feels “terrible” about the killings and said he was “deeply sorry” to the victims’ families.

“I hope you can find it in your hearts to forgive me, I’m so sorry and I never wanted this to happen,” Harrouff said, breaking down in sobs. “I’m so sorry. It’s like a nightmare.”

McGraw ended the interview by promising to work with Harrouff’s father to learn why he snapped.

“You keep hanging in there and we are going to look for answers,” McGraw told him.

Harrouff’s family has said he had been acting strangely for weeks before the attack.

His mother, Mina Harrouff, told police he claimed to have superpowers and that he had been sent to help people. She said his bed had been moved to the garage because he thought there were demons in the house, and that a few hours before the attack, she stopped him from drinking cooking oil from the bottle, only to find him eating a bowl of cooking oil and cheese.