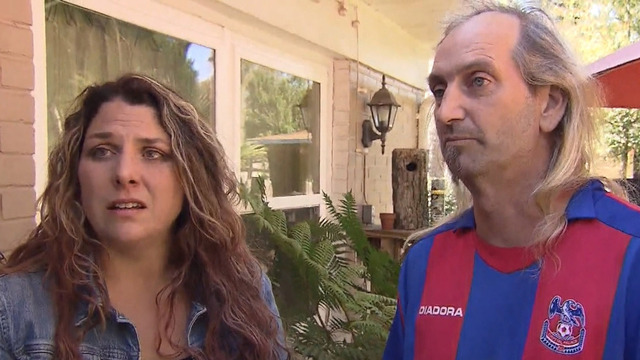 MILTON, Florida -- April Gunnell's husband Ian called in the tip that led to the capture of Blake Fitzgerald and his girlfriend Brittany Harper.

Escambia County Florida deputies shot and killed Fitzgerald, who the sheriff says used his girlfriend as a shield against bullets. But authorities insist she volunteered in the couple's six-day crime spree from Mississippi to Florida -- allegedly robbing, carjacking and holding people hostage.

Last night they were caught on surveillance camera, right before Ian Gunnell says Fitzgerald kicked down his door.

"He was telling us why he was here, which was they were on the run, in trouble, needed somewhere to stay right now," Ian explained.

Police were driving up and down the Gunnells' neighborhood. Ian said Fitzgerald and Harper were waiting for a chance to leave.

April was in the room with the couple's two-year-old daughter Madeline.

"My daughter's laying there, and kinda came to at some point, and I kept trying to calm her get her back to sleep. It was absolutely terrifying."

The Gunnells say they were held hostage by the suspects for two hours. At one point the so-called Bonnie and Clyde used the phones in their home.

"We heard those conversations. They said goodbye to their families," Ian told CBS News.

The suspects fled in the Gunnells' truck. Police spotted them within ten minutes.

"There was a mass amount of anger for them coming into my house and taking us and putting us in that situation," April explained. But she says she mostly just feels sorry for the Fitzgerald and Harper.

As for Brittany Harper, she survived being shot was taken to the hospital non-life threatening injuries.