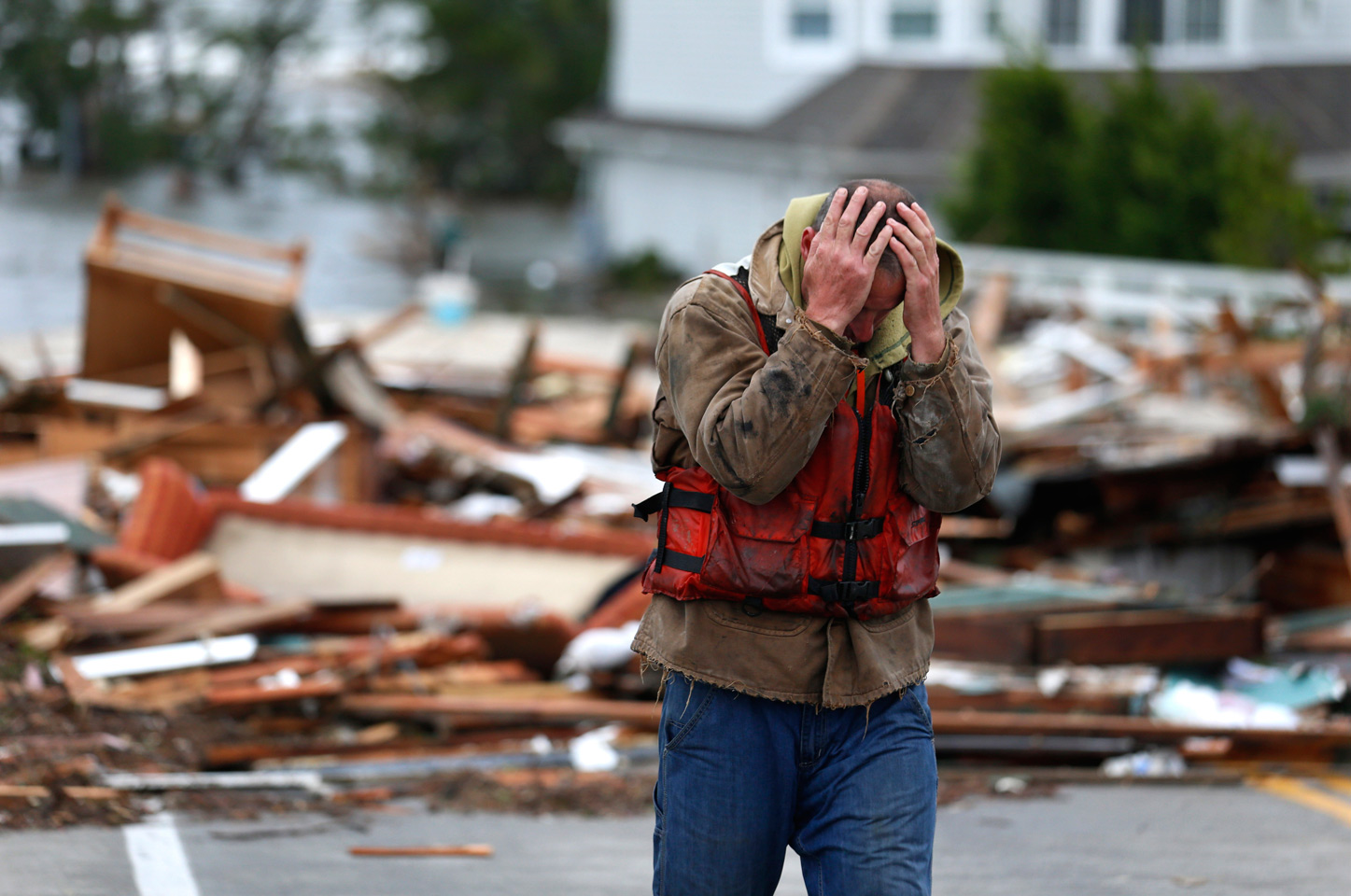 (MoneyWatch) After devastating the East Coast and causing an estimated $20 billion in property damage, a storm like Sandy should serve as a reminder to homeowners everywhere -- and especially those near the coasts -- to make sure they have the right kind of coverage in the event of a disaster. Even if you think you are properly insured, you may find that hidden loopholes in your policy mean you're actually not covered in the worst-case scenario. Here's what you can learn from the five-year ordeal of Daniel Zwerdling and his wife, Barbara Zwerdling-Rothschild.

On a stormy night in 2003, Hurricane Isabel was rampaging up the Eastern Seaboard. The Zwerdling-Rothschilds had retreated to the first floor of their 100-year-old house in Chevy Chase, Md., for some nerve-soothing yoga when a century-old oak slammed into the house. The tree crashed through the roof, the third floor, then the second, finally coming to rest on the yoga mats the couple had abandoned only moments before.

"We couldn't have known it at the time, but the tree crashing through the roof would turn out to be the easiest part of this ordeal," says Daniel, a senior correspondent at National Public Radio. For the next two years, the couple was locked in a battle with their insurance company. By the time their claim was settled, the house had been open to the elements so long it had deteriorated beyond repair -- despite every effort to protect it -- and they had to tear it down. It would be a total of five years before they were back in their own home again. (See: "How to file a homeowners insurance claim.")

"We had what we were told was the Cadillac of insurance policies," says Daniel, who assumed their house would of course be replaced. What he and his wife didn't know was that policyholders have very little recourse if their insurance company simply refuses to pay enough to cover rebuilding costs. "In our case, State Farm offered $120,000, which was about a third of what every contractor we consulted said it would cost," Zwerdling says.

(When asked about the Zwerdling-Rothschild case, Maria Jackson, State Farm spokeswoman for the Maryland/D.C. area, said, "While we do not comment on customers' claims for privacy reasons, we make every effort to resolve their claims to their satisfaction under the terms of their policies.")

After two years, two law firms, a formal complaint filed with the Maryland Insurance Administration, a year of arbitration, and finally hiring a consulting firm that specializes in fighting insurance companies (and collects a fee of 8 percent to 10 percent of the settlement), the Zwerdling-Rothschilds got most of what they'd asked for in the beginning -- but they lost their beloved house where they'd lived for 23 years and raised three children.

You probably took out a homeowners policy as one step in your mortgage application, tossed the policy into a desk drawer, and never thought about it again. After all, the premium is usually paid through your mortgage, and until a tree comes slamming through your roof, your to-do list is dominated by other concerns. "Too many people are not adequately insured, and they don't know it until it's too late," says Amy Bach, executive director of United Policyholders, a nonprofit consumer education organization. An estimated 66 percent of American homes are underinsured by an average of 18 percent (that's $90,000 for a $500,000 house), according to a 2007 survey by Marshall & Swift/Boeckh, a company that provides data to the insurance and building industries.

So as Sandy supplies us with one last reminder of the Atlantic Hurricane season, it's time to dig out your policy and perhaps pay a visit to your insurance agent to negotiate some changes.

A standard "all-perils" homeowner policy will replace or repair your house and personal belongings if they are damaged or destroyed, cover additional living expenses if the damage makes your house uninhabitable for a period of time, and provide liability coverage should someone be injured while on your premises. Sounds great on first reading, but most policies are rife with loopholes. All of the coverage is limited by specific dollar amounts, and many "perils" are explicitly excluded. For example, flood damage is never covered, and some companies exclude such things as earthquakes sewage backup, or acts of terrorism. Most policies also have separate limits, usually in the neighborhood of $1,000, on how much they'll reimburse you for certain individual items, such as jewelry, artwork, firearms, and electronics -- even if the overall limit on your policy is much higher. To protect yourself, make sure to:

-- Customize your perils: If you live in Chicago, you probably don't need earthquake coverage. But suppose you live in an old house. If the house is damaged in a fire, say, not only would you need to get it repaired, you'd need to get a building permit and likely have to make changes to meet current building codes. Make sure your policy covers those extra costs.
-- Itemize valuables: You can boost coverage for specific items like computer equipment or jewelry in two ways. You can add a rider, which is, in essence, a small supplementary insurance policy that pays for a specific item's loss, usually with no deduction. Or you can raise the limit on coverage for that item's category -- jewelry and furs, for example -- in your existing policy. This higher limit, though, will be subject to the policy's overall deductible and could result in limitations on your coverage. It will not, for example, cover an item that has been misplaced, whereas a rider often will. With a typical policy from a large insurer like Allstate, a rider covering a $5,000 engagement ring would cost about $50 a year in increased premiums in, say, Iowa, while raising the overall jewelry limit to cover an item valued at $5,000 would cost about $128. (These rates vary from company to company and state to state, but not wildly.)

Since the insurance company will not pay one penny more than is clearly required under your policy's limits, it's up to you to make sure those limits accurately reflect what it would cost to rebuild or repair your home and replace its contents. Bear in mind that these costs have nothing to do with the real estate market; it's all about construction costs.

"The law is that the homeowner has the duty to set his own limits, but when you walk into the insurance agent's office, he's never, ever going to ask you how much insurance you want," says United Policyholders's Bach. Instead, he's going to ask you what kind of house you have and what the square footage is, and then will calculate your costs and coverage based on an industry computer model."If that turns out to be an underestimate when you make a claim, the agent can throw up his hands and say it's not his responsibility to set your limits," Bach says. "And the courts have backed up the insurance companies."

The value limit on your dwelling is the amount of money it takes to rebuild your house. It does not include the value of the land, nor is it equivalent to your house's market value or the amount of your mortgage. Although lending institutions often require that the face value of the insurance cover the mortgage, some states mandate that mortgage lenders allow the amount of insurance to reflect only the cost of rebuilding.

With the current upheaval in the housing market, this is a particularly difficult number to get a handle on. Construction costs have not fallen as fast as housing prices in many places, and the market value of some houses may have slipped below what it will cost to rebuild. In some communities, on the other hand, your mortgage may be significantly higher than the cost of rebuilding, and you may be paying for more insurance coverage than you will be able to use. "With the current changes in housing values and construction costs, it's a good idea to revisit the cost of rebuilding every few years," says J.D. Howard, executive director of Insurance Consumer Advocate Network (iCAN). Here's how to get an accurate estimate of rebuilding costs:

-- Hire a contractor: The very best method is to hire a local contractor to inspect your house and come up with an estimate of how much it will cost to rebuild. The fee will fall roughly in the range appraisers charge -- 0.1 percent of the estimate-- but if you find yourself in Zwerdling's position, you'll be glad you paid. "If there's a discrepancy between your numbers and the insurance company's, you must insist that yours are the correct ones," Bach says. If your insurer resists, find another insurer.
-- Go online: The next best method is to use a computer model similar to those used by insurance companies. Bach recommends two online programs that you can download for a small fee -- Accucoverage ($7.95) and HomeSmart Reports ($6.95).
-- Take inventory: You'll also want a careful accounting of the contents of your house. To make the process easier, download inventory worksheets from United Policyholders, or use online forms from the Insurance Information Institute. In addition, take pictures of every room and e-mail them along with a copy of the inventory to a friend or relative so there's a backup that won't be destroyed along with your house. One of your obligations in filing a claim is to provide a thorough accounting of your losses within a designated period of time, usually 30 days. "The burden to prove your loss falls on the policyholder," says iCan's Howard. Failure to meet your obligations gives the insurer cause to exclude or reduce coverage.

In general, replacement-cost coverage -- abbreviated as RCV in insurance lingo -- is designed to get you back where you were before your house was damaged or destroyed. Stay away from actual cash value coverage, or ACV, because the payout includes a deduction for depreciation. Say you have an 8-year-old refrigerator that has a depreciation life of 10 years. ACV would pay only 20 percent of the cost of a new refrigerator of comparable quality.

For added peace of mind, consider purchasing an "extended replacement cost" policy, which adds a buffer, usually 20 percent to 25 percent, beyond your limits. The extra coverage will increase your premiums by about 10 percent, according to the Insurance Information Institute. But with the average homeowners insurance premium running $764 a year, the risk/reward calculation can be attractive. For example, if you find yourself in a widespread disaster such as a wildfire or hurricane, local builders will be in great demand, and that can drive up construction costs.

Insurance is a competitive industry, and companies will often fight for your business. Once you've figured out exactly what coverage you want, present your needs to different agents and get competing quotes. Be warned: Not all companies exclude the same perils from their basic coverage, so you will need to carefully compare policies. Check your state insurance department's Web site for results of customer satisfaction surveys and premium comparisons on their Web sites; the National Association of Insurance Commissioners maintains a list of every state's site.

"We've found that homeowners are inclined to accept the policy with the lowest premium," Bach says. "But your home is your biggest asset, so don't skimp on protecting it." When disaster strikes, finding out that your coverage is inadequate can be devastating. "You'd be a lot better off when something like this happens if you've examined every word in your policy and made sure you understand it," Daniel Zwerdling says. "When we discovered we'd been misled, it was more than just a financial thing. We felt like somebody we knew and trusted had turned on us."

A third of small businesses have reinstated COVID-19 rules