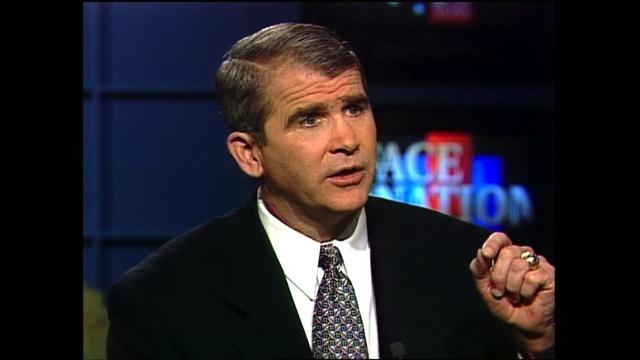 Has congressional testimony ever been as hotly-anticipated as the planned appearance Thursday by former FBI Director James Comey before the Senate Intelligence Committee?

Comey was fired by President Trump last month amid an ongoing FBI investigation into possible collusion between Mr. Trump's campaign and Russia. He reportedly wrote a memo during his time serving under Mr. Trump alleging that the president pressured him to end his investigation. Senators are sure to ask Comey about that memo Thursday, among other things, and his answers could shed significant light on the controversy.

It bears emphasizing: Comey's appearance, and the furor surrounding it, is unusual. It's seldom the case that congressional testimony is so publicly hyped, and so likely to be immediately spun by both sides' partisan imperatives.

It has happened a handful of times before, though. One such example came in July 1987, when Lt. Col. Oliver North testified before a select congressional committee investigating the Iran-Contra scandal.

Some background: President Ronald Reagan's administration had approved the sale of U.S. arms to Iran in exchange for the release of hostages held in Lebanon by Iranian ally Hezbollah. A portion of the proceeds from the sale went to fund the Contras, a militia movement fighting a Democratically-elected communist government in Nicaragua.

Iran was, at the time, a designated state sponsor of terror, and it was also involved in a war against neighboring Iraq, a U.S. ally. Both the sale of arms to Iran and the provision of support to the Contras were contrary to the Reagan administration's stated policy. Funding the Contras was actually explicitly banned in legislative text known as the Boland Amendment. And the "Iran-Contra Affair," as the controversy had come to be known, threatened the administration's credibility at home and abroad.

North was responsible for the idea to divert a portion of the proceeds from the arms deal to the Contras. But when congressional investigators asked him about the matter in August 1986, North initially decided to lie, denying in an off-the-record talk that any off-the-books operation to fund the Contras was underway at the White House. After the scandal went public following a report in a Lebanese newspaper later that year, North attempted to shred any documents related to his involvement. When North's role in the scandal became public on November 25, 1986, he was fired by President Reagan.

During his high-profile appearance before the select committee in July 1987, North admitted, under oath, that he misled Congress during his earlier informal interrogation.

"Yes, indeed, I did lie to the Congress previously," he declared.

George Van Cleve, the committee's senior Republican counsel, prompted North at one point, "You've also admitted you altered some of the documents in which you clearly describe your role."

"I did," North admitted.

"You intended to mislead Congress," Van Cleve followed up.

North was convicted during a 1989 trial of obstructing an investigation and destroying evidence, but his conviction was thrown out on appeal in 1991.

North's role in the Iran-Contra controversy, and his high-profile testimony in 1987, can be seen as a "sorting device in the march to the partisan splits we see today," Face the Nation moderator John Dickerson explained in a recent "Whistlestop" podcast.

"Like Alger Hiss, John Dean, [and] Anita Hill, [North] was a star of congressional testimony who held the country transfixed and deepened the country's partisan divisions. To conservatives, North was a hero, working around the bureaucracy to free American hostages and fund the Contras in the global fight against communism," Dickerson explained. "To his critics, North was a rogue ideologue with delusions of grandeur who had circumvented Congress and the White House and run a separate government within the executive branch."

North's appeal among Republicans was apparently strong enough that he sought a second act in 1994, running for the Virginia Senate seat held by Democrat Charles Robb. On January 30, 1994, Face the Nation's Bob Schieffer sat down with North to discuss his bid and his past.

In the interview, North tried to claim that he did not mislead Congress, as he'd once admitted he did.

Schieffer was aghast. He reminded North, "'Yes, indeed, I did lie to Congress previously' – That's what you said."

"What I said was that in an informal, off-the-record meeting in August of 1986, a situation nobody should ever have been put in, I was asked questions that I had been told from the president of the United States could never be revealed," North replied.

"So how can I know that you're telling the truth?" Schieffer later asked. "You said that 'I told the truth once I took the oath.' Is a person allowed not to tell the truth when he's not under oath?"

"Well I'm talking about congressional hearings, Bob," North said. "If the Congress wants to get the straight answers, what they ought to do is bring people up there, have them raise their right hands just like I did, and expect that they will tell the truth…we ought not to have those kinds of informal meetings."

"What's the criteria to know that Oliver North is telling the truth? Only under oath, or all the time?" Schieffer asked.

Watch the video above for more of North's interview on Face the Nation in 1994. Tune into CBS News tomorrow for coverage of James Comey's testimony. And tune into Face the Nation this Sunday for the latest political news and analysis.