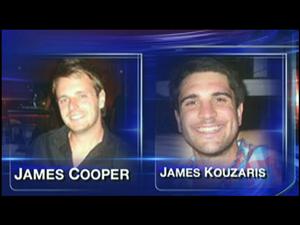 (CBS/AP/WTSP) SARASOTA, Fla. - Two British tourists were fatally shot early Saturday morning in a Sarasota, Fla. public housing complex, allegedly by a 16-year-old. Police are still investigating why the pair were in the high crime Newtown neighborhood in the middle of the night.

James M. Cooper, 25, and James Thomas Kouzaris, 24 were on vacation in the United States after having recently graduated college reportedly at the University of Sheffield. The two tourists were staying in Longboat Key, many miles from Newtown, says CBS affiliate WTSP.

Police arrived on the scene early Saturday morning in response to a 911 caller reporting that a man had collapsed on the street bleeding, says the station. The body of the second man was found across the street. Newtown resident Shawn A. Tyson, the teenage suspect, was arrested about 24 hours after the incident and charged with the murder of Cooper and Kouzaris.

The Newton housing complex north of downtown Sarasota is far away from any beaches and tourist attractions and is known for its high drug and crime rates.

Holloway says police "have their suspicions" why Cooper and Kouzaris were in the area, "but at this time, it would be unfair to state those."

Tyson had been arrested for assault with a handgun 12 days ago but was released from custody when the victim of the crime failed to show up for an April 15 interview, reports WTSP.

Prosecutors say they intend to try Tyson as an adult in the killings.