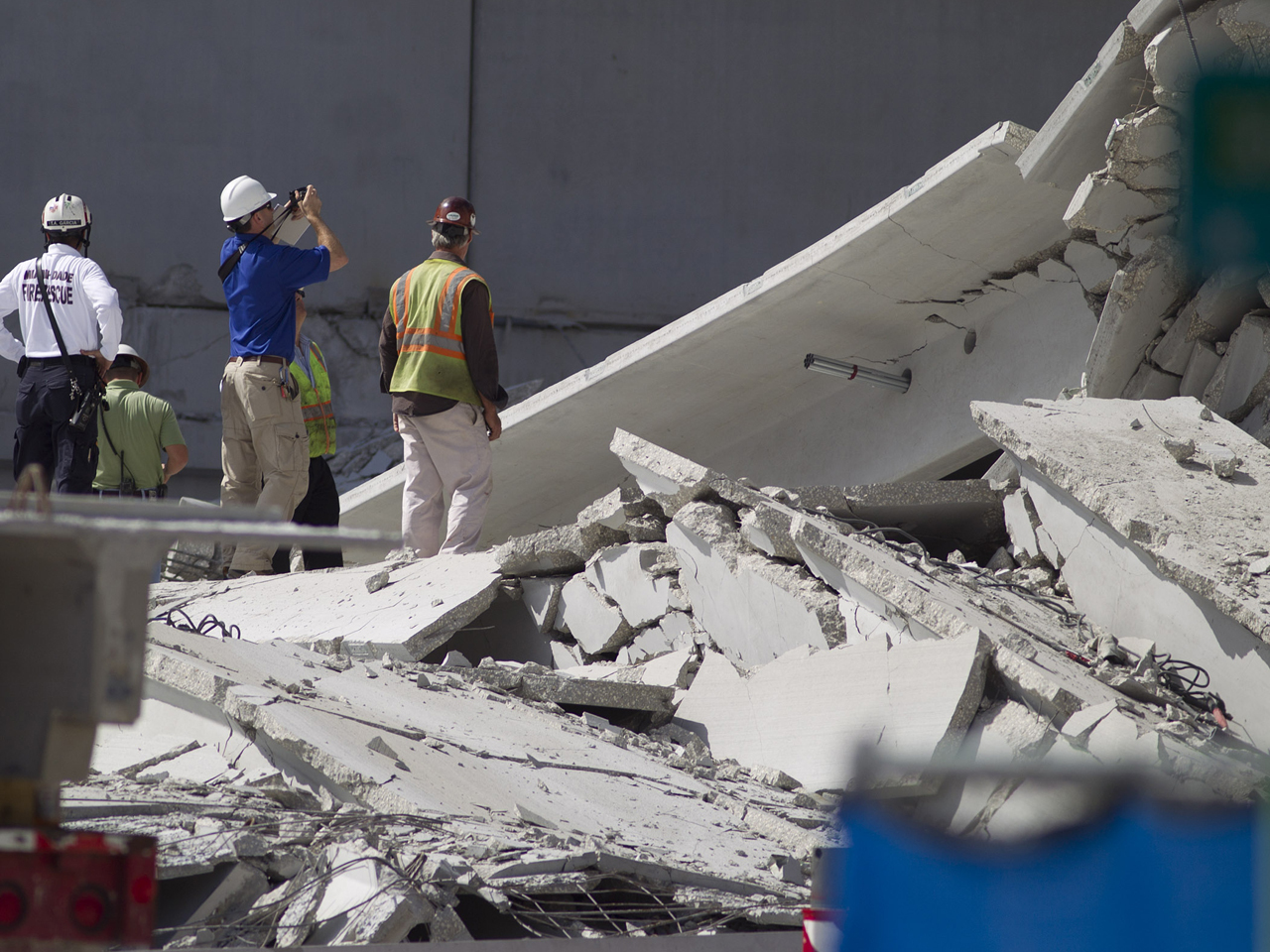 DORAL, Fla. For the first time, a construction worker who survived the horrifying crash of the parking garage at Miami Dade College's west campus is speaking out, saying he jumped from the 2nd floor in order to save his life.

As 27-year-old Anthony Williams spoke with CBS Station WFOR, Urban Search and Rescue crews resumed their search on Friday for a man still missing two days after the collapse.

"It sounded like an earthquake with the whole building falling down, like someone put a stick of dynamite in it," said Williams, a laborer, who had just started work at the site on the day of the accident.

Williams told WFOR correspondent Peter D'Oench, "I was thinking of my mom and my 9-year-old daughter. Right now, I am really shook up and terrified. I still have nightmare and dreams. I can still feel the building shaking."

"I remember coming back after my lunch break and seeing a crack in the building on the 5th floor," he said. "That was just ten minutes before this crash happened. I told someone about it. I heard a crash and saw the building was going down. I jumped from the 2nd floor and it saved my life."

"I did that to get away," he said. "It was my only chance. Otherwise I'd get caught and it would have been the end of my life. Right now my body is really sore. I jumped from that high a place. My legs and my toes hurt and my back hurts. I don't think I'll ever work in a garage again."

Two attorneys representing Williams, Robert Rubenstein and DeWayne Terry, are considering a lawsuit based on what the investigation reveals and what OSHA says.

"We don't know the cause," Rubenstein told D'Oench. "We are going to find out. "We're concerned for the families. Until we get information from OSHA and the investigation is complete, we won't know whose fault this is. A lot of people died in this tragedy. This is a tragedy that should not have happened."

William Byrne, the President of the Ajax Building Corporation that is the general contractor for the parking garage project, released a statement to WFOR after Williams said he saw a crack in the building.

"While we appreciate all information and feedback," he said in the statement, "it is extremely important to avoid speculation. This investigation needs to be based on facts and we have asked anyone who believes that they have pertinent information to provide that to OSHA. Our number one priority is to determine the cause of this tragic accident."

Teams have been combing through the debris and rubble with giant cranes looking for Robert Budhoo.

The missing man's family is waiting for word as workers search through piles of twisted steel and concrete. A portion of the five-story garage fell to the ground around noon Wednesday.

The firm handling the construction of the five-story garage is Ajax Building Corp. whose CEO Bill Byrne addressed the media Friday.

He confirmed there was an incident inside the garage on Monday or Tuesday where a crane bumped a column. However, Byrne said, the column did not sustain damage while the crane did. He said the crane was repaired, inspected, recertified and then put back into service inside the garage. Also according to Byrne, it is likely an adjacent garage and building may have sustained damage in the collapse.

"It is my understanding that there was an incident where the crane bumped a column," he said. "It didn't cause any damage to the column. The crane was repaired and inspected and it was rectified and the engineer looked at the column and deemed that it was perfectly safe."

Williams took exception to that.

"If they knew that the crane hit the building, why would they send us out there?" he asked.

OSHA is on site and will begin its investigation once the recovery phase is complete.

According to Byrne, Ajax will work closely with OSHA to determine what caused the 5-story garage to come crashing down.

For the family of missing electrical worker Robert Buhdoo, every minute that goes by is precious time wasted.

"I'm tired of being quiet. Taking whatever they give me. I'm not going to do that. I need answers and I need them now," Tasha Bagwandeen, Buhdoo's daughter, said Friday. "It's not fair. My dad is laying there somewhere hanging on for dear life. And they're taking their own little time saying he's not alive. They have no proof. He needs somebody to rescue him."

But Miami-Dade Police and Miami-Dade Fire Rescue Officials are calling this a recovery operation, not a rescue mission.

"I feel they're taking their slow time because they feel he's gone," Buhdoo's niece Stacey Wong said. "We don't know if he's gone. We have a family that believes in God and we believe that he's alive."

All Laurel Budhoo can do now is sit, wait, and wonder.

"Why did they call off the search? Is my husband not important?" Buhdoo asked.