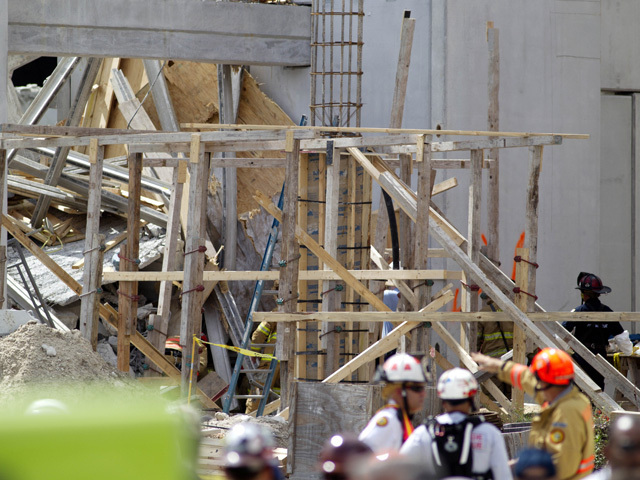 MIAMI One person remains trapped inside the rubble of a Miami-Dade College parking garage that collapsed Wednesday, killing two workers and leaving several others injured.

The trapped worker was getting oxygen and being treated by a physician, but officials did not describe the extent of his injuries. Fernandez said the rescue would be a "long, tedious effort."

At least 10 other workers were hurt when the roof of the five-story concrete garage fell shortly before 11:40 a.m., creating a pancake-style collapse on the West Campus of Miami-Dade College, officials said.

"It was a floor upon floor, collapsing all the way down to the ground floor," Fernandez said.

William P. Byrne, president and chief executive officer of the garage contractor, Ajax Building Corp., said an internal review was being launched to determine the cause. Byrne said the company would embrace "any additional protocols, policies and procedures that will enhance and ensure the continued priority of safety."

Marino said three people were initially trapped in the rubble, including the man who died. Another eight were taken to a hospital, she said. Two injured workers were treated on the scene.

Crews estimated that approximately 30 workers were in the nearly completed garage when it collapsed, according to CBS Miami.

Dogs, firefighters and other people in hard hats walked over piles of concrete, plywood and metal rubble to look for other possible victims, but there was no indication anyone else was missing.

Victoria Buczynski of Miami said she saw the collapse while she was working at Gurkha Cigars across the street from the construction site at Miami-Dade College.

"It fell to the ground like a house of cards," Buczynski said. "The construction workers started running out, screaming. It was loud. Our entire building shook."

No students were in the area at the time. The campus was evacuated after the collapse and closed for the rest of the week as investigators planned to pick through the rubble to see what caused the garage to crumble.

The construction of the 1,855-space garage was nearly complete. Ground was broken on the $22.5 million project in February, and it was to be finished in December, according to the website of the contractor, Ajax Building Corp.

The first floor was to have classroom and office space. The structure is nestled closely to other buildings at the college, which serves about 8,000 students and is one of several campuses in the Miami-Dade College system. This campus opened in 2006.

An Ajax spokeswoman declined comment and said a company safety crew was en route to the scene.

The identity of the worker who died was not immediately released.