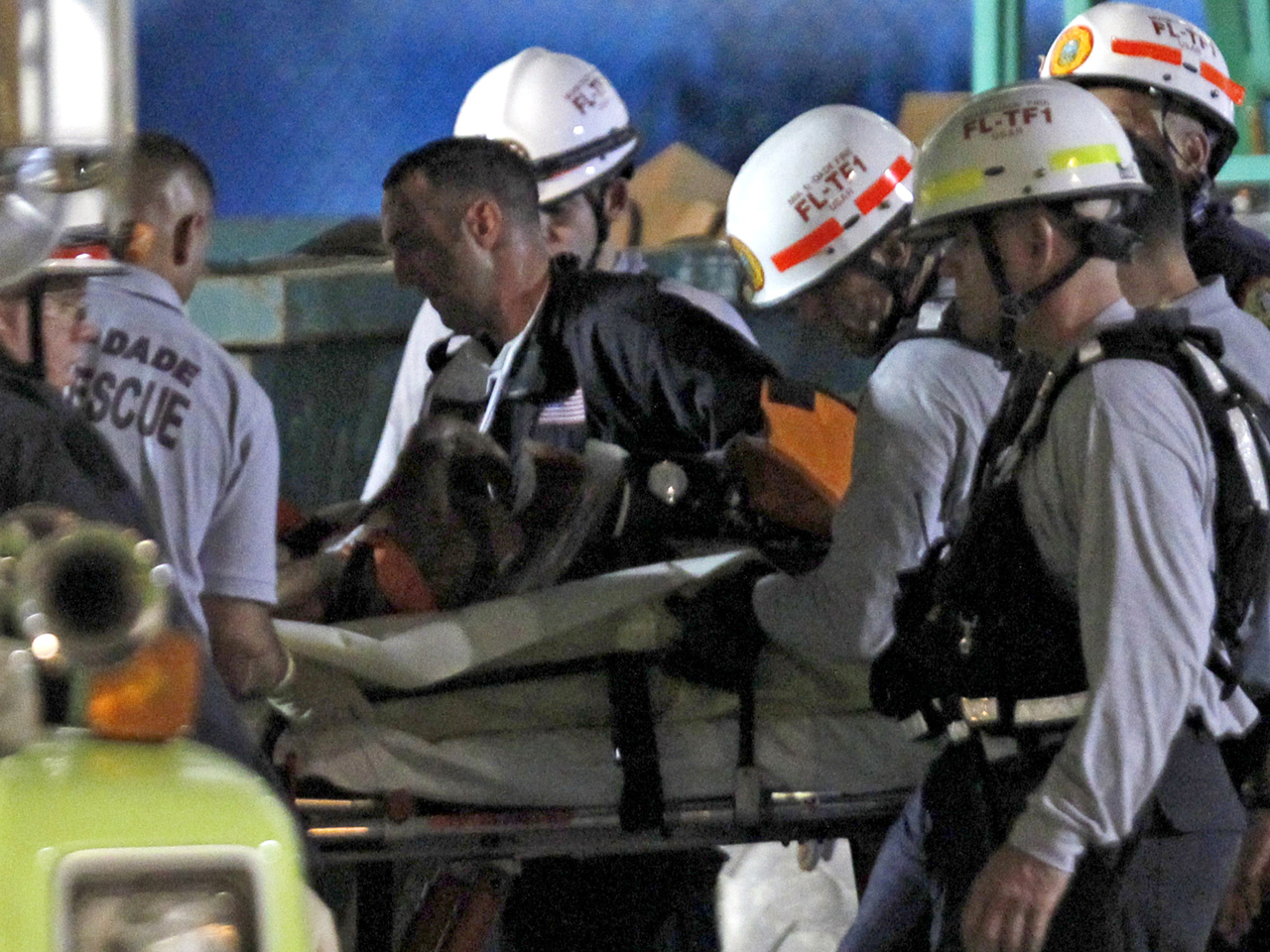 MIAMI A third victim of a massive parking garage collapse at a Miami college died Thursday morning, just hours after rescuers pulled him from beneath piles of twisted steel and crumbled concrete, police said.

Samuel Perez, 53, had been trapped in the collapse Wednesday at Miami Dade College. He was beneath the rubble for about 13 hours, communicating with rescuers before he was taken to a hospital. He was first discovered after workers heard his cries, and crews were saddened to hear he had died, said Miami-Dade Police Lt. Rosanna Cordero-Stutz.

Authorities said they no longer expected to find anyone else alive and expected to pull a fourth person from what remained of the five-story structure that had been under construction. One worker was still missing, said Miami-Dade Fire-Rescue Assistant Chief David Downey.

William P. Byrne, president and chief executive officer of the garage contractor, Ajax Building Corp., said during a news conference Thursday there was "no warning whatsoever" that anything was wrong.

"We have absolutely no idea what caused this incident," Byrne told reporters.

Byrne previously said an internal review was being launched to determine the cause. Byrne said the company would embrace "any additional protocols, policies and procedures that will enhance and ensure the continued priority of safety."

Steve Budhoo said his brother Robert was still missing in the rubble. Steve Budhoo was huddling with family members Thursday at a hotel near the garage site. Authorities would not confirm Budhoo was among the missing, but his brother said his family feared the news that would come.

"We break down and we console each other. We are just going through the motions," said a visibly shaken Budhoo.

Besides Perez, police identified the other two men who died as Jose Calderon and Carlos Hurtado de Mendoza, 48. They died at hospitals after being rescued. All three of the dead worked for subcontractors of Ajax Building Corp., Byrne said.

Another man was pulled out alive and brought to a hospital shortly after the collapse, Miami-Dade Fire-Rescue spokeswoman Griselle Marino said. A video shot by Miami-Dade Fire-Rescue and provided to The Associated Press showed four firefighters pulling him out from under a steel beam. His face and hands were bloody, and he was carried away on a stretcher.

At least seven workers were brought to the hospital with unidentified injuries, while an eighth was treated on the scene and sent home.

There were no students in the area because the garage was under construction. The campus was evacuated and closed for the rest of the week. Officials said there was no visible damage to other buildings, but even a hairline fracture could compromise safety.

The garage is connected to the campus' main building.

"Very concerning to us was that this facility was about to open. Had this collapse happened just a couple of months from now, it would have been a totally different story. So for that reason, we're not going to leave a stone unturned," said Juan Mendieta, spokesman for Miami Dade College.

Mendieta said the project was put out for a competitive bidding process and was in compliance with state laws.

Victoria Buczynski of Miami said she saw the collapse while working at Gurkha Cigars across the street from the construction site.

"It fell to the ground like a house of cards," Buczynski said. "The construction workers started running out, screaming. It was loud. Our entire building shook."

Byrne said crews were putting in a "spandrel beam" on the day of the collapse. The beam, a five-story, pre-cast concrete puzzle piece that was to attach to an elevator shaft, was still hanging from a crane near the wreckage Thursday.

Ground was broken on the $22.5 million project in February, and the 1,855-space garage was to be finished in December, according to Ajax's website. The first floor was to have classroom and office space. The structure is next to the college's main office building and nestled among other campus buildings.

The college serves about 8,000 students and is one of several campuses in the Miami Dade College system. The campus opened in 2006.