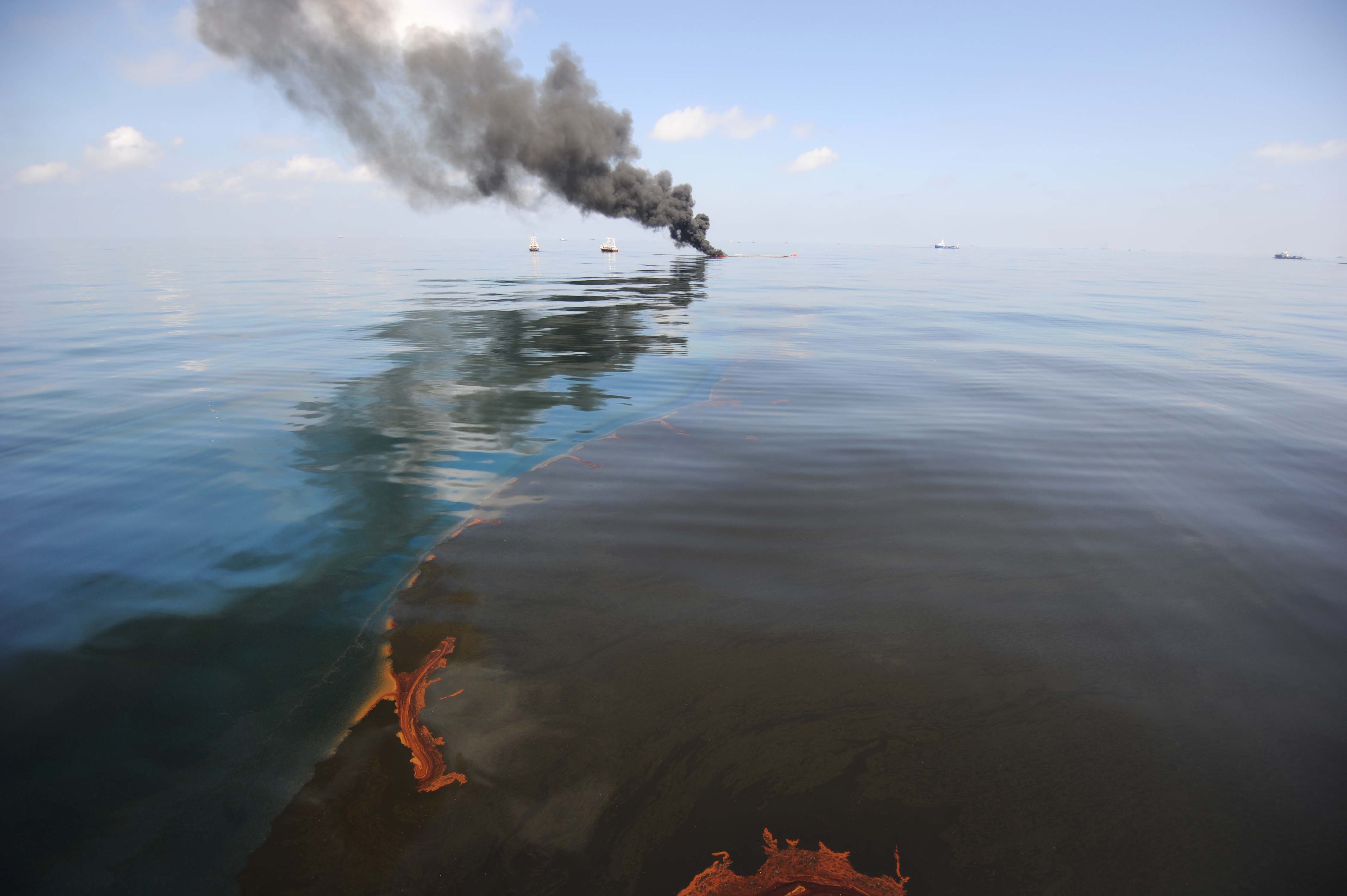 Soon after the BP oil spill in 2010, scientists began noticing something troubling with common bottlenose dolphins in the Gulf of Mexico.

Dozens of dolphins in Louisiana's Barataria Bay, among the places hit hardest by the spill, were suffering. They were underweight and a study last year found these top level predators were five times more likely to have moderate to severe lung disease.

"The dolphins were just in very poor health," National Oceanic and Atmospheric Administration's Lori Schwacke, who led the study of 29 dolphins, told CBS News. "The major issues that we were seeing were lung disease and a failure to appropriately respond to stress ... Those issues are something that is consistent with oil exposure."

In a separate PLOS One study in February, the dolphins were increasingly showing up dead across the Gulf. The study led by Stephanie Venn-Watson, director of translational research at the National Marine Mammal Foundation, found that deaths for 2010 and 2011 in Louisiana were the highest ever recorded and that the largest numbers of dead cetaceans (marine mammals) were happening after the BP spill and in areas that were exposed to the oil.

The search for clues into the dolphins' demise is part of a much larger effort by dozens of scientists to understand the damage caused to the Gulf of Mexico ecosystem by the worst oil spill in the nation's history. About 134 million gallons spilled forth following the Deepwater Horizon explosion in April 2010 - 10 times worse than the Exxon Valdez spill.

Scientists have concluded the spill damaged the health of scores of species in the Gulf, from algae to birds to sea turtles to coral reefs. And while many have recovered, the effects on some species could last for generations.

The ultimate environmental toll will factor heavily into what BP, Transocean and other responsible parties pay for the restoration - a process that has already run into the billions of dollars and will play out in the coming years.

BP alone has been assessed $2.84 billion in civil penalties for Gulf restoration, voluntarily put $1 billion to early restoration and could end up with a record $13.7 billion Clean Water Act penalty - about $4,300 for every barrel spilled. It potentially faces additional costs under the Natural Resource Damage Assessment, a process in which federal, state and tribal authorities are calculating the spill's damage and the type and amount of restoration required.

BP, which has gone to court to challenge some of these damage amounts, has suggested the Gulf has healed. In a report on the spill in March, the company said marshlands and beaches had recovered, and claimed that dolphin deaths couldn't be linked to the spill and that only 2 percent of the nearly 18,000 water samples had concentrations of oil-related chemicals that exceeded the U.S. Environmental Protection Agency's water toxicity benchmarks for aquatic life.

It also said tests have shown that seafood in the Gulf was safe to eat - a claim bolstered by a study out this month from the University of Florida that concluded samples of more than 1,000 Gulf of Mexico fish, shrimp, oysters and blue crabs taken from Cedar Key, Fla., to Mobile Bay, Ala., between 2011 to 2013 showed no elevated contaminant levels.

"The science is showing that most of the environmental impact occurred immediately after the accident - during spring and summer 2010 - in areas near the wellhead and along oiled beaches and marshes," BP's Laura W. Folse wrote in the report. "Areas that were affected are recovering and data BP has collected and analyzed to date do not indicate a significant long-term impact to the population of any Gulf species."

But scores of scientists and environmentalists say that rosy picture doesn't reflect the reality on the ground.

The oil that smothered the marshlands and fouled the deepest parts of the ocean, they concluded, has wreaked havoc on this fragile ecosystem - from a decline in marshland insects to genetic changes in tiny minnow-like fish to the death of deep sea corals that were hundreds of years old.

Charles Fisher of Penn State University was among a team of scientists who used an automated submersible and manned robotic-armed vehicle to survey 11 deep-sea coral sites. For those sites 12 miles or more away, the corals appeared healthy. But at a site seven miles from the site of the spill, the scientists found dying corals covered in oil and the dispersants used in the cleanup. Half the 43 corals were impacted along with species that depend on them like brittle stars.

"Once we were close enough to zoom in on a few colonies, there was no doubt that this was something I had not seen anywhere else in the Gulf: an abundance of stressed corals, showing clear signs of a recent impact," Fisher said. "This is exactly what we had been on the lookout for during all dives, but hoping not to see anywhere."

Subsequent trips discovered two more sites as far as 13 miles from the spill site and as deep as 6,000 feet that have been damaged, showing the first finding was not an isolated incident. In many of those impacted sites, the signs of trouble are hard to miss, such as patchiness that demonstrates tissue death and branches that wilted or broke off.

And because these corals are so slow-growing, Fisher projected it would probably take generations before they fully recovered.

"At least two of the reefs we found will not be the same as they were in our grandchildren's lifetime," he said. "There is serious impact. They are only 3 feet tall and 500 years old. When you kill one of these, it's gone."

Back on shore in the marshlands, LSU's Linda Hooper-Bui has spent the past several years studying the insects that are crucial sources of food for the fish, birds and other creatures that live in these estuaries.

She found that the numbers of spiders, crickets, katydids and other insects in areas hit by oil compared to untouched areas dropped by as much as 90 percent in the warm months. Acrobat ants disappeared in the first few years from the oiled sites and those they did find had smaller bodies, a sign they weren't getting enough to eat.

"In some areas, the ecosystem has done phenomenally well in repairing itself," Hooper-Bui said. "But the insects and spiders in heavily oiled areas are not doing well at all. They are the center of the food web so it's a huge concern."

Like so many of the scientists in the Gulf, Hooper-Bui has been meticulous about ensuring the links she makes between the remaining oil in the sediment and the environmental damage stands up to scrutiny. After ruling out storms and other factors, she believes the oil is behind the bugs' demise.

"We have pretty strong evidence that the presence of oil in the sediment in the warmer months is fumigating the insects," she said. "It's either something in the oil or a product of the weathering of the oil or bacteria breaking down the oil."

Andrew Whitehead, in the department of environmental toxicology at the University of California, Davis, saw similar impacts to another tiny but critical member of the marsh community - the minnow-sized killifish, which is among the most prevalent fish in the marsh.

Whitehead and his colleagues found killifish were showing signs of oil exposure in their genes consistent with developmental abnormalities, impaired reproduction and death. In the lab, they found exposing the fish embryos to oil taken from the sediment - and fingerprinted to the spill - had a dramatic effect.

"When we exposed embryos to sediments collected in the field, they just don't develop properly and don't hatch," Whitehead said.

On a broader scale, the oil is literally eating away at the marshlands. Mangroves that were bird rookeries have disappeared and chunks of marsh have collapsed into the water, allowing the open water to creep further inland.

Already an ecosystem that has lost hundreds of thousands of acres since the 1930s to levies for flood control and canals for the oil and gas industry, the Mississippi Delta loses of a football field of wetlands every hour, and the oil spill is seen as intensifying that decline.

"In the first six months after the spill, the erosion rates doubled or tripled," said LSU's Eugene Turner, who has spent four decades studying the Louisiana marshes. "The wetlands coast doesn't come back. Once it's lost, it's basically gone."

In a 2013 paper in Environmental Research Letters, Turner and his colleagues at LSU concluded that the heavy oil from the BP spill in Louisiana weakened the soil, "creating a deeper undercut of the upper 50 (centimeters) of the marsh edge, and causing an accelerated rate of erosion that cascades along the shoreline."

Turner acknowledges the erosion linked to the spill is slowing. But like many scientists studying the Gulf, he expects the full extent of the impact to these wetlands - a crucial nursery for many fish and other marine life and among the most productive fisheries in the world - will not be known for some time.

"Things have not recovered. The marsh alone is not coming back," he said. "These marshes don't naturally restore. That is a long-term consequence and anything dependent on the marsh is compromised as well."

It is true that the swamps, marshes and bayous look better than in the days after the spill, when television screens filled with pelicans covered in black crude and volunteers scooping up gobs of oil. BP, for one, claims the amount of oiled shoreline dropped from 220 miles after the spill to 13 miles by mid 2011 and less than four miles by 2014.

But oil is still found in the Louisiana wetlands, oozing up through the sediment and turning up as asphalt-like chunks.

"I could take you out to the marsh today, pick up sediment and smell it. It would smell like oil," Hooper-Bui said.

It is difficult to quantify the pace of recovery or even what that might look like, especially given the spill is one of many threats from pollution that the Gulf continues to endure at the hands of humans.

"If it was an acute event, which it turns out it wasn't, then the answer is, yes, we would see resilience and the ecosystem would recover in 10 years," Hooper-Bui said. "The challenge we have is that tropical storms and hurricanes remobilize the oil. We don't know where the oil is coming from but it could already be in the marsh and brought to the surface or offshore."

Still, there are hopeful signs.

Hooper-Bui's acrobat ants have been spotted again in the marshes and BP's report concluded that bird nesting and reproduction rates were normal a year after the accident. But for other species like dolphins, scientists - forced into playing the role of detectives - are still trying to understand the true extent of the spill's impact.

"Right now, we are building evidence for what we are seeing in the dolphins and the oil spill," Venn-Watson said, of the dolphin deaths, which were consistent with the timing and spatial distribution of the spill. Other factors like marine biotoxins and morbillivirus have been ruled out for the strandings.

And because they are slow to mature and live into their 60s, Schwacke fears the health woes they are seeing now could be with the dolphins for years to come.

"The generation time for dolphins is very long so it is going to take a long time for the population to recover," Schwacke said. "That, to me, is the major concern."