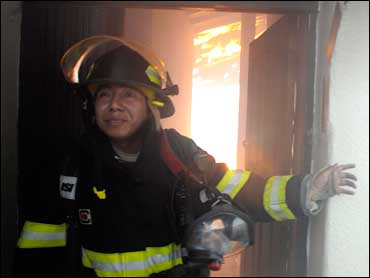 A small army plane crashed into an apartment building in an upscale neighborhood of Ecuador's capital on Thursday, killing five people, firefighters said.

Black smoke poured from the four-story building on Quito's north side Thursday night as rescuers searched for victims and survivors.

Sanchez said the bodies were badly burned, but did not give more details about the victims. Rescuers evacuated an unspecified number of injured people in stable condition, he added.

Associated Press journalists at the scene saw rescuers carry off a young girl whose head was bloodied.

The aircraft was a Beechcraft army plane on a training run carrying a major, a lieutenant and a sergeant, Defense Minister Javier Ponce said earlier. He said at least one civilian was killed.

A thick mist shrouded the neighborhood at the time of the crash, according to witness Eric Samson, who saw the aircraft slam into the side of the building.

Soon after, explosions could be heard from inside.

"It was horrible. I heard the plane flying very low, then I heard the explosion," neighbor Camille Avsert told the AP. "We ran out onto the street and saw fire."

The aircraft went down on a street where four other planes crashed during the 1990s. Gonzalez Suarez Avenue, with luxurious buildings up to 15 stories tall, is along the path of descending airplanes as they prepare to land at the airport 2 miles away.