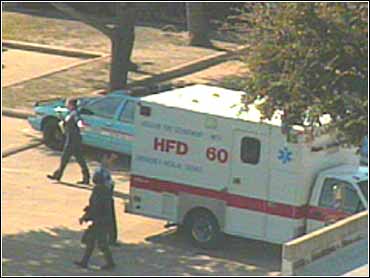 Five people are dead in two Houston shootings that may be linked by the jealous rage of a Korean convenience store owner suspecting that his estranged wife had an affair with another Korean man.

Houston police, responding to a midday shooting at a wholesale clothing and perfume store, discovered three bodies and a seriously wounded man, who later died in an area hospital of an apparent self-inflicted gunshot wound to the head.

Police said the man transported to Ben Taub General Hospital was the shooter of the three family members found in the southwest Houston strip mall. The man turned the gun on himself at the end of a 30-minute standoff with Houston police, officials said.

During the investigation of the shooting, Houston police Capt. Richard Holland said police became concerned for the suspect's wife. Her body was discovered about three hours later in the cooler of the north Houston convenience store she and the suspect owned.

Police identified the victims as Chung Chang, 58; his wife Hyun Chang, 54; and their daughter Kathy Chang, 23. Police had not released the identities of the gunman or his estranged wife Tuesday afternoon.

According to witnesses interviewed by police, the gunman walked into Amko Trading around noon and said, "They murdered my family, and now I'm going to murder them." Then he started shooting.

A SWAT team found the bodies of two women and a man inside the store, along with the mortally wounded gunman and two pistols, both of which appeared to have been fired.

Kristopher Ahn, who identified himself as the store owner's attorney, said his client had known the gunman for many years and they had a business relationship.

Ahn added that the gunman had been behaving strangely lately, baselessly accusing the store owner of sleeping with his wife.

Houston police, meanwhile, are trying to figure out what feud the gunman had with the three victims at their Amko Trading wholesale store.

Both the store owner and the shooter were Korean immigrants. The owner emigrated to Houston about 15 years ago and opened his store, which was just becoming successful, in the mid 1990s.

"When I heard the shots I got out and ran. I was very scared," said employee Ruben Zuniga. He said eight customers were inside when the violence began, but no one else was hurt.

Zuniga added he did not see the shooting or the gunman.

Police said the suspect had been in a "lingering feud" with store owners.

"Apparently the gunman and the victims had some type of a business dispute," Houston Police Department spokesman Alvin Wright said.

Wright described the suspect as an Asian man aged between 20 and 30.

Police spokesman Martin DeLeon told KTRH radio in Houston that numerous calls to 911 in the lte morning had reported that one man, who was seen holding a pistol at the door of the business, was firing shots.

"Witnesses told us that several people are down," Wright said minutes after the shooting.

The store is in an area of Houston filled with office parks commonly occupied by discount and wholesale stores.

These U.S. companies are still doing business in Russia
Thanks for reading CBS NEWS.
Create your free account or log in
for more features.
View CBS News In
CBS News App Open
Chrome Safari Continue
Be the first to know
Get browser notifications for breaking news, live events, and exclusive reporting.