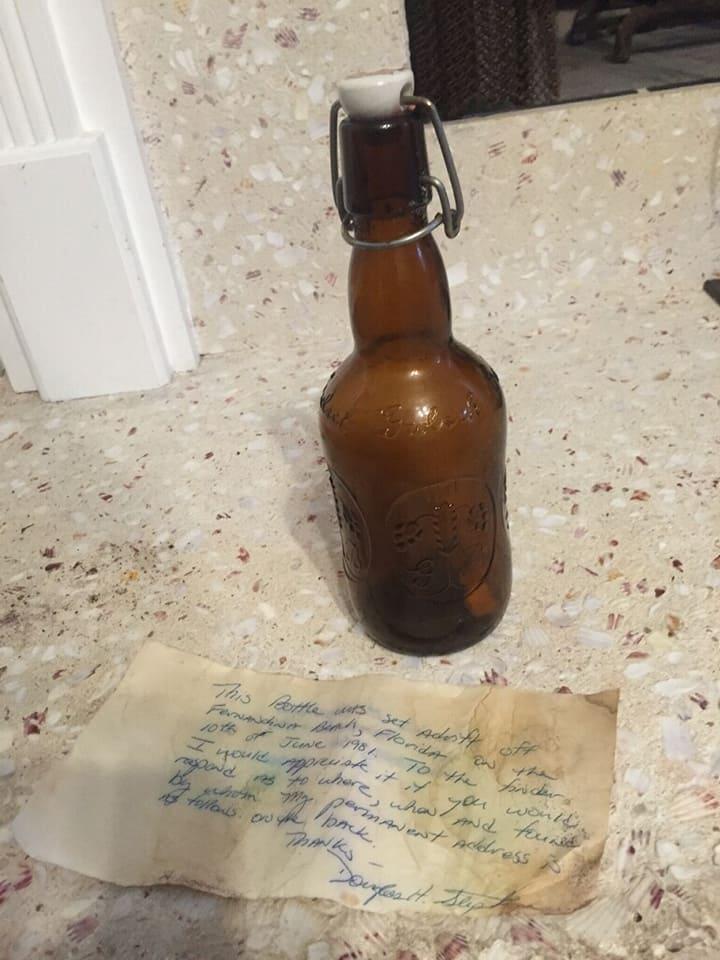 FERNANDINA BEACH, Fla. -- A message in a bottle that sat dormant for more than three decades in Florida has connected two strangers.

WXIA-TV reports Ryan Burchett found the brown glass bottle while he was fishing on Little St. Simons with friends and family. The group was walking along the shoreline, looking for seashells, when Burchett spotted the bottle.

"I knew it looked a little different," Burchett told WXIA-V. "When I held it up to the sun, I could see a note inside."

He proceeded to open the top of the bottle, but the swing top separated from the cork and fell apart. The note remained trapped inside the glass, but eventually, Burchett was able to wrap the handwritten letter around a stick and pull it out.

The message read: "This bottle was set adrift off Fernandina Beach, Florida on the 10th of June, 1981. To the finder, I would appreciate it if you would respond as to where, when and found by whom. My permanent address is as follows on the back. Thanks, Douglas H. Stephens."

Burchett was determined to follow through with Stephens' request. He traced the address back to Chamblee, Georgia, but there was one problem -- public records showed the property had been bought and sold several times since the letter was written.

Burchett was unable to look for Stephens on social media because he does not use Facebook. So instead, Southeast Adventure Outfitters posted a note to their Facebook page on Burchett's behalf.

The post received more than 1,500 shares and hundreds of comments and tags. But Stephens didn't see the message since he is not on Facebook either.

Eventually, Stephens was put in touch with Burchett by phone. The men talked for quite some time, sharing stories about the island where Stephens had vacationed growing up.

The men say they plan to meet up in person later this summer.