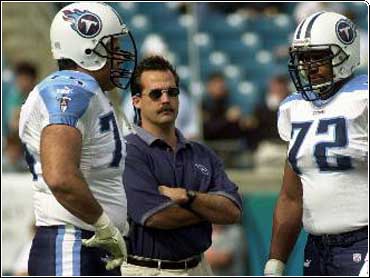 Jeff Fisher, who coached the Tennessee Titans to the Super Bowl last season, has agreed to a contract that will keep him with the team through the 2003 season.

"We hope to have it signed and sealed by Thursday," team president Jeff Diamond said Tuesday.

Diamond would not discuss financial terms, but Fisher probably will receive a hefty pay raise for leading the Titans to their first AFC title.

Fisher had one year left on his current contract paying an estimated $900,000. He had given the Titans a Thursday deadline the end of minicamp to complete negotiations or wait until the end of the season when his contract expired.

The new contract is expected to put Fisher in the same salary class as that of Pittsburgh coach Bill Cowher, Jacksonville coach Tom Coughlin and Carolina coach George Seifert. Each earns between $2.2 and $2.5 million a season.

Seattle coach Mike Holmgren is believed to be the league's highest paid coach at $4 million a year. He also serves as the Seahawks' director of football operations.

The Titans finished with a 14-2 record before making their run to the Super Bowl. Team owner Bud Adams said before the Super Bowl that signing Fisher to a new contract would be a big priority in the offseason.

Fisher was hired in November 1994 when the team was still the Houston Oilers. He was given the job on an interim basis in the middle of a 2-14 season.

Adams gave Fisher the job permanently in January 1995 and extended the contract through the 2000 season, the first time he had ever done that for one of his coaches. Adams then announced he was talking with Nashville about relocating his franchise.

The next three years were difficult moving from Houston, and playing at half-empty college stadiums in Memphis and Nashville. In 1999, the team was renamed the Tennessee Titans and moved to Adelphia Coliseum in downtown Nashville.