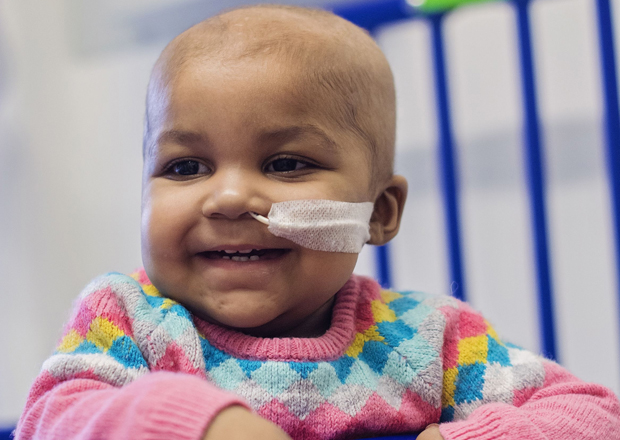 The day before her first birthday, Layla Richards' parents were told their daughter was about to die. The child had been diagnosed with Acute Lymphoblastic Leukemia (ALL) when she was just 14 week old. Her doctors described her case as "one of the most aggressive forms of the disease we have ever seen."

After several attempts at treatment failed, including many rounds of chemotherapy and a bone marrow transplant, the doctors said they were out of options.

"Doctors don't want to say that there's nothing we can do and offer palliative care but sometimes that's the only option," Layla's mom Lisa said in a hospital press release. "We didn't want to accept palliative care and give up on our daughter though so we asked the doctors to try anything."

And they did. In fact, they tried something that had never been done in humans before. In the first case of its kind, a team from London's Great Ormond Street Hospital (GOSH) for Children performed a new treatment that edits genes to create so-called "designer" immune cells programmed to target and kill drug-resistant leukemia.

It worked, and Layla is now cancer free.

The procedure, which had previously only been done in mice, involves adding new genes to healthy donor T-cells -- the immune cells that fight off abnormalities and infections -- which arm them against leukemia. Using molecular tools that act like very precise scissors, specific genes are cut in order to make the T-cells behave in very certain ways. First, the cells become invisible to a powerful leukemia drug that would normally kill them. Then they are reprogrammed to only target and fight against leukemia cells.

"The treatment was highly experimental and we had to get special permissions, but she appeared ideally suited for this type of approach," said Waseem Qasim, professor of cell and gene therapy at University College London Institute of Child Health and consultant immunologist at GOSH.

After the treatment had been administered, baby Layla spent several months in isolation to protect her from infections while her immune system was extremely weak. After a few weeks, there were signs the treatment was working.

"As this was the first time that the treatment had been used, we didn't know if or when it would work and so we were over the moon when it did," said Prof. Paul Veys, director of bone marrow transplant at GOSH and Layla's lead clinician. "Her leukemia was so aggressive that such a response is almost a miracle."

Once doctors were sure the leukemia cells were gone, they gave Layla a bone marrow transplant to replace her entire blood and immune system which had been wiped out by the treatment.

The little girl is currently recovering at home and sees her doctors for periodic checkups. Her parents are amazed by her progress.

"I took the gamble and this is her today standing, laughing, giggling," said her father, Ashleigh Richards. "She was so weak before this treatment -- horrible, horrible. I'm just thankful."

Though the treatment is considered a huge breakthrough, experts caution that they do not know how well it would work in other patients.

"We have only used this treatment on one very strong little girl, and we have to be cautious about claiming that this will be a suitable treatment option for all children," Qasim said. "But, this is a landmark in the use of new gene engineering technology and the effects for this child have been staggering. If replicated, it could represent a huge step forward in treating leukemia and other cancers."

Full clinical trials are currently being planned and are scheduled to begin in early 2016.