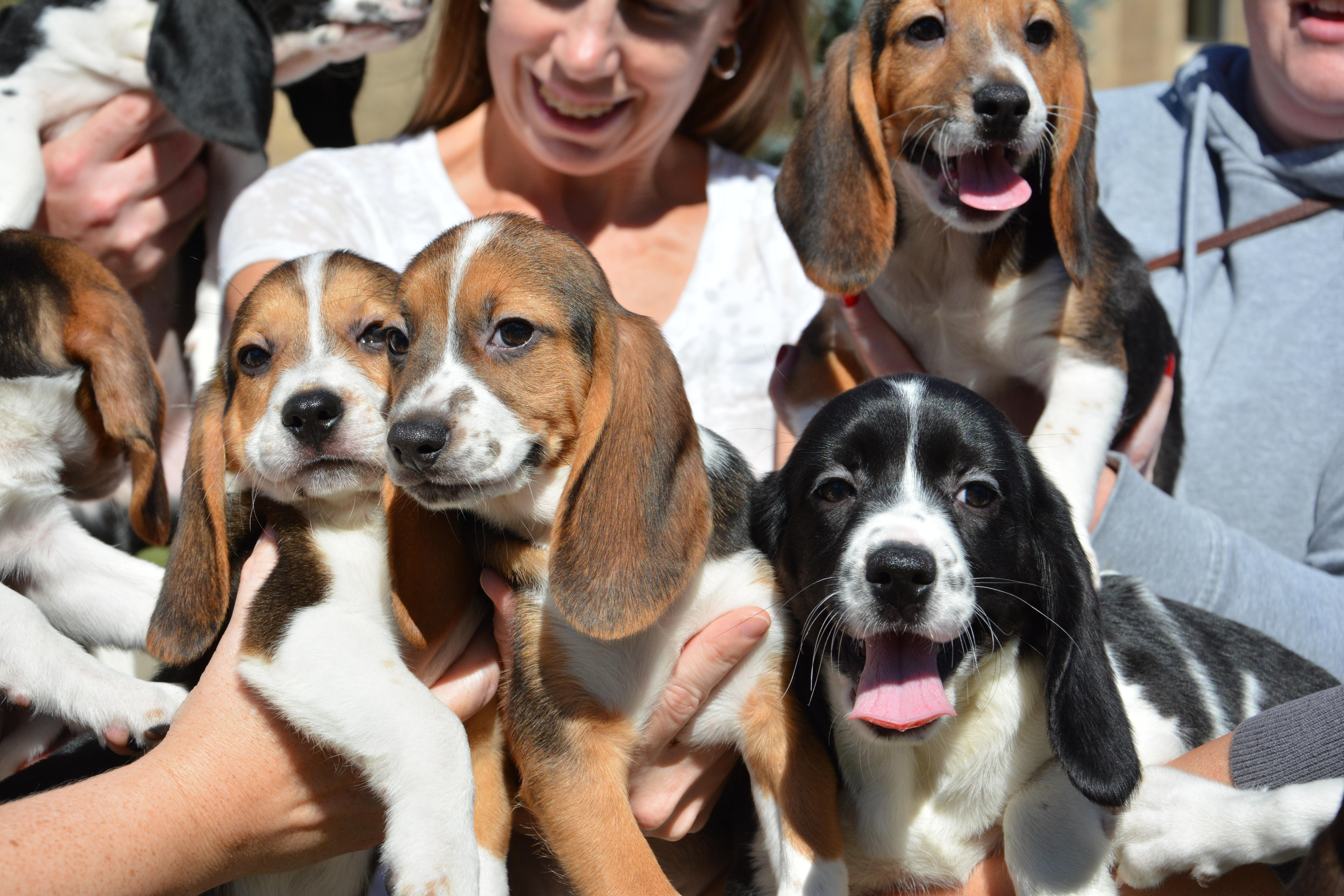 They're not only adorable - they're a scientific breakthrough. For the first time, a litter of puppies have been born using in vitro fertilization, say Cornell University researchers.

A female dog fertilized with 19 embryos gave birth to seven healthy puppies, according to a statement from Cornell's College of Veterinary Medicine. Two puppies are from a beagle mother and a cocker spaniel father, and the other five are the offspring of two pairs of beagle fathers and mothers.

"IVF was first done in people back in the mid 1970s," Alex Travis, associate professor of reproductive biology at the Baker Institute for Animal Health, told CBS News. Yet until now, scientists hadn't been able to perform it successfully in dogs, despite many years of trying, he said.

For in vitro fertilization, a mature egg is fertilized in the lab with a sperm, and an embryo is produced. The embryo is then transferred into a host female at the right time in her reproductive cycle.

The first challenge for the researchers was to collect mature eggs from the female oviduct (called Fallopian tubes in humans). The researchers first tried to use eggs that were in the same stage of cell maturation as other animals, but since dogs' reproductive cycles differ from other mammals, those eggs failed to fertilize.

It's not as easy to perform in vitro fertilization in dogs as it is in people, or cats, Penn Vet's Dr. Margaret Casal told CBS News. "The cycle in the dog is so very different than in other species."

"Dogs only cycle twice a year so if you're doing experiments, there's not a lot of material," said Travis.

Through experimentation, the Cornell researchers discovered that if they left the egg in the oviduct one more day, the eggs reached a stage where fertilization was greatly improved.

Also, by adding magnesium to cell culture cultures, Travis said they were able to better prepare the sperm for fertilization.

"We made those two changes, and now we achieve success in fertilization rates at 80 to 90 percent," Travis explained in a statement.

The final challenge for the researchers was freezing the embryos. Freezing them allowed the researchers to wait until the right time in the female dog's reproductive cycle and then insert them into the oviducts. Travis said that part of the process was performed in May 2015.

In dogs, pregnancy is 63 days from ovulation -- a little over 2 months, Travis said.

The Cornell team previously delivered Klondike, the first puppy born from a frozen embryo in the Western Hemisphere, in 2013.

"We can freeze and bank sperm, and use it for artificial insemination." He said the technique could be used to conserve the genetics of endangered species.

"The reason for doing things like this is that it will lead to the preservation of species that are almost lost. Canid types - wolves, foxes - certain sub-species. There are many different types. They may not be facing extinction just yet but some are running into a crisis," said Penn Vet's Casal, an associate professor of medical genetics, reproduction and pediatrics for dogs and cats.

She said some types of wolves, for example, are very genetically similar animal to animal - they have very similar immune systems.

"If some virus comes along that has mutated, it can essentially wipe out the population. This gives the ability to freeze embryos and perform IVF later to revive a species that may have been brought to extinction," Casal said.

With new gene editing techniques, researchers may one day be able to remove genetic diseases and traits in an embryo, too, ridding dogs of heritable diseases.

"With a combination of gene editing techniques and IVF, we can potentially prevent genetic disease before it starts," Travis said.

Canines share more than 350 similar heritable disorders and traits with humans, almost twice the number as any other species. So, dogs now may offer a "powerful tool for understanding the genetic basis of diseases," Travis said.

"Yes this is a very big deal. It's pretty spectacular to get that to work," said Casal.

Jennifer Nagashima, a graduate student in Travis' lab and the first to enroll in the Joint Graduate Training Program between the Smithsonian Conservation Biology Institute and Cornell's Atkinson Center for a Sustainable Future, is the paper's first author. The research was described in a study published today in the scientific journal PLOS ONE.

Travis said the puppies have all gone to happy homes, including his own. "I have two of them. We named them after colors and I have Red and Green." The puppies turn five months old this week.