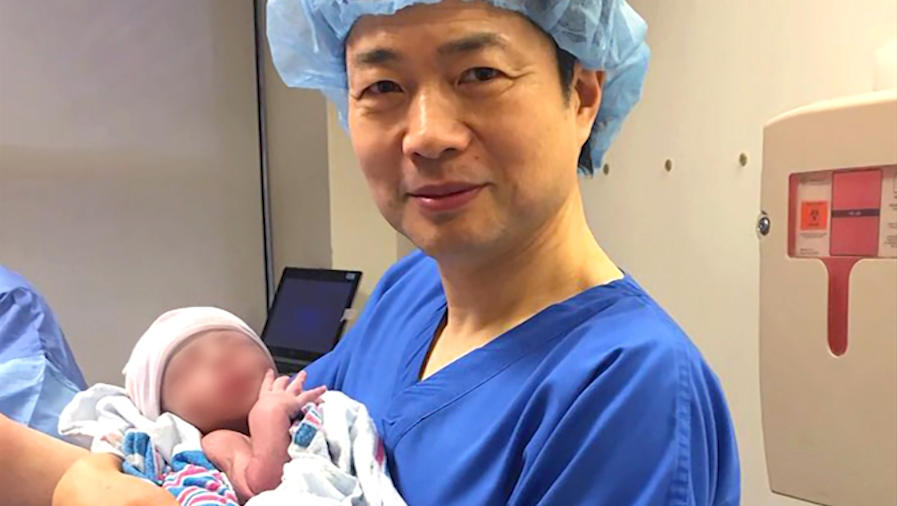 In what experts are calling a “revolutionary” medical event, the first baby with DNA from three parents has been born.

The little boy, now nearly six months old, was conceived using a controversial technique meant to help people who carry genes for fatal rare diseases. The procedure received widespread media attention when lawmakers in the U.K. became the first to approve its use last year. It is not approved in the U.S.

As first reported in New Scientist, the baby was born on April 6, 2016 and doctors say he appears healthy. His parents were treated by U.S. fertility specialists in Mexico, where there are no laws prohibiting such methods. His mother carries a genetic mutation for Leigh syndrome, a rare neurological disorder that usually becomes apparent in the first year of life and is generally fatal.

She had suffered four miscarriages and had two children who died from Leigh syndrome, one at age six and one at eight months. It’s a devastating disease for parents and children. Symptoms of Leigh disease usually progress rapidly and lead to generalized weakness, a lack of muscle tone and a buildup of lactic acid in the body, which can cause respiratory and kidney problems. Children rarely live more than six or seven years.

While the mother herself is healthy, a gene for the disease resides in her DNA, in the mitochondria that powers cells. In her case, about 25 percent of her mitochondria reportedly carry the disease-causing mutation.

“This mitochondrial disease is usually a very devastating situation for the babies and the family,” Zhang told CBS News.

He opted to try the three-parent IVF technique to ensure that the disease mutation would not be passed along to the baby.

“This is the very first time at least in human reproduction that the offspring are produced with three parties – one sperm and different parts of two eggs,” Zhang said. “So this is very revolutionary.”

The procedure, called spindle nuclear transfer, involves removing the healthy nucleus from one of the mother’s eggs and transferring it to a donor egg which had had its nucleus removed. The resulting egg – with nuclear DNA from the mother and mitochondrial DNA from a donor – was then fertilized with the father’s sperm.

“If you look at the amount of DNA, it’s almost like it’s 2.001 parents rather than three. But it’s DNA from three different people,” CBS News medical contributor Dr. David Agus noted on “CBS This Morning” Wednesday.

He said the technique has the potential to help many more families in the future. “There are thousands of kids born every year with mitochondrial defects and many of them succumb to this horrible disease. And there are also lots of women who can’t give birth because they know they have this particular defect. So it really does open the door of hope for them to have children of their own,” Agus said.

According to New Scientist, the scientists in this case created five embryos using the technique. Only one developed normally and that embryo was implanted in the mother.

The baby has not shown any signs of developing the illness, Zhang said. His mitochondria have been tested and less than one percent carries the mutation, believed to be too low a level to lead to disease.

The fertility method is not legal in the United States. Zhang told New Scientist that they conducted the procedure in Mexico because “there are no rules” there.

“To save lives is the ethical thing to do,” he said.

Zhang and colleagues are expected to describe the case at the American Society for Reproductive Medicine’s annual meeting in Salt Lake City next month.

Sian Harding, a medical professor and bioethics adviser who reviewed the ethics of the technique in the U.K., told New Scientist the case seems to have been handled according to ethical standards.

But safety concerns remain. According to the article, “Last time embryologists tried to create a baby using DNA from three people was in the 1990s, when they injected mitochondrial DNA from a donor into another woman’s egg, along with sperm from her partner. Some of the babies went on to develop genetic disorders, and the technique was banned. The problem may have arisen from the babies having mitochondria from two sources.”

And even in Britain, where the procedure allowing DNA from three parents was approved in February 2015, leaders disagreed heatedly on the issue while it was up for debate in the House of Commons, with some raising concerns about “designer babies” and “playing God.” Leading churches in Britain – both Protestant and Catholic – opposed the procedure on religious and ethical grounds.