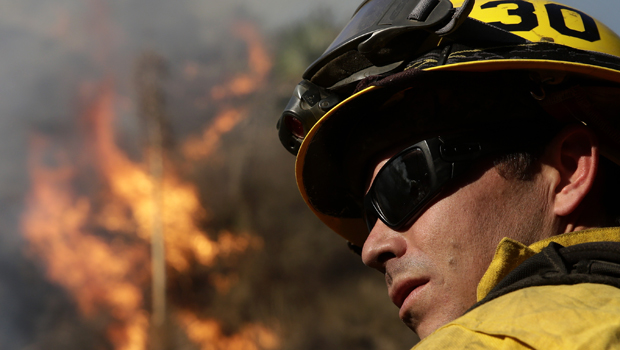 LOS ANGELES -- Firefighters sought to prevent a wildfire in the foothills near Los Angeles from flaring up on Saturday, as they put out embers from a blaze that has destroyed five homes, officials said.

That was the same level of containment firefighters reported on Friday, but officials were optimistic they were gaining the upper hand on the blaze centered in the San Gabriel Mountains, on territory that is part of the Angeles National Forest.

"It's not spreading anymore," Brady said.

"Trying to keep the fire from establishing itself down here at the bottom and taking off anywhere," Nathan Judy of Angeles National Forest told Evans.

Hot, dry Santa Ana winds from interior deserts fanned the flames when it broke out on Thursday, but the next day, the winds subsided and the fire barely grew in size.

On Saturday, the winds were expected to be even tamer, authorities said on their Incident Information System website.

The fire prompted some 3,500 residents in parts of Glendora and neighboring Azusa northeast of Los Angeles to vacate their homes on the order of authorities.

By Friday morning, some 2,800 evacuees had been allowed to return home. Some 200 to 300 homes in an Azusa neighborhood remained under mandatory evacuation orders, according to U.S. Forest Service spokeswoman Sherry Rollman.

The fire has destroyed five homes and damaged 17, Brady said. Three firefighters, including one who was hospitalized with serious burns, and two civilians with minor injuries have been hurt, he said.

The blaze broke out when three men were building a campfire and used paper to feed the flames, officials said. Bail was set at $500,000 for each of the men, who were jailed on Thursday on suspicion of recklessly starting the fire.